LIMA, Peru — Peru’s presidential election is headed for a runoff, with Pedro Castillo, a far-left former union activist and teacher, in the lead, according to data released Monday by the country’s electoral body.

He will likely face a right-wing candidate in a second round of voting in June.

Mr. Castillo, a social conservative, was one of 18 candidates, and tapped into a wave of anti-establishment sentiment in an election characterized by widespread frustration with the political system.

He is likely headed into a runoff with Keiko Fujimori, the daughter of the jailed former authoritarian leader Alberto Fujimori, according to a survey of electoral tallies by the firm Ipsos for a local television channel. Trailing behind Ms. Fujimori is an ultraconservative, Rafael López Ariaga.

Either pairing would set the stage for a highly polarized second-round election, the results of which could steer the country in radically different directions.

“This is the vote of a country tired, depressed, frustrated, and also fed up,” Fernando Tuesta, a Peruvian political analyst, said in a statement on Monday.

The election comes at a low point for Peru. Over the last five years, the country cycled through four presidents and two Congresses and witnessed repeated clashes between the legislative and executive branches. 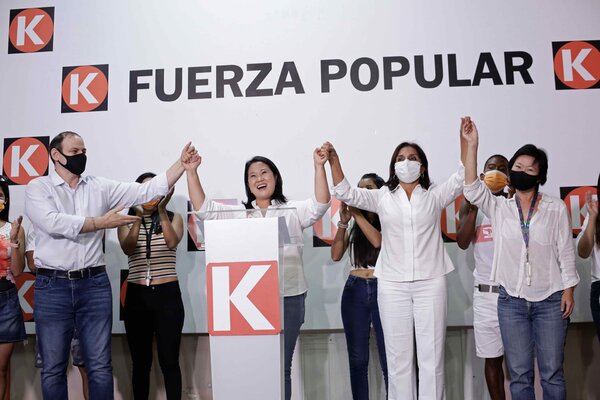 Three former presidents have spent time in jail during bribery investigations, including one candidate in this year’s election; a fourth killed himself to avoid arrest; and a fifth, Martín Vizcarra, one of the most popular recent leaders, was impeached in November.

His replacement, who lasted less than a week in office, is under investigation in connection with the fatal shootings of two young men at protests, which led to his resignation.

Mr. Castillo, 51, wants to nationalize the country’s natural resources to help pay for investments in health care and education; promises to have a top court elected by popular mandate; and is proposing a new constitution to favor ordinary Peruvians and not business interests.

In the run-up to the election, Mr. Castillo drew large crowds in rural towns, but did not receive broad coverage in national media until polls showed him surging to around 6 percent a week before the election.

He celebrated his surprise victory from the poverty-stricken highland region of Cajamarca, where as a youth he was part of the peasant security patrol that enforces local laws and customs.

“The blindfold has just been taken off the eyes of the Peruvian people,” Mr. Castillo told throngs of supporters in Cajamarca on Sunday night, wearing the wide-brimmed hat of farmers in the region.

“We’re often told that only political scientists, constitutionalists, erudite politicians, those with grand degrees can govern a country,” he said. “They’ve had time enough.”

Ms. Fujimori, who is making her third bid for president, has been jailed three times in recent years in connection with an ongoing money laundering probe. In this election, she vowed to stop pandemic lockdowns and crack down on crime.

On Sunday, Marianela Linares, 43, a Castillo supporter, said he represented “the big change” voters have been looking for but have thus far failed to find in traditional politicians.

“We’ve always been deceived by high-level people who always said they’d help us get ahead but have lied to us,” said Ms. Linares, a public-school teacher in the Amazonian town of Puerto Maldonado. “He knows what need is. He knows what hunger is, and what it means to live in misery.”