A pharmacist who was arrested on charges that he intentionally sabotaged more than 500 doses of the Covid-19 vaccine at a Wisconsin hospital was “an admitted conspiracy theorist” who believed the vaccine could harm people and “change their DNA,” according to the police in Grafton, Wis., where the man was employed.

The police said Steven Brandenburg, 46, who worked the night shift at the Aurora Medical Center in Grafton, Wis., had twice removed a box of vials of the Moderna vaccine from the refrigerator for periods of 12 hours, rendering them “useless.”

“Brandenburg admitted to doing this intentionally, knowing that it would diminish the effects of the vaccine,” the police said.

The attempt to destroy precious doses of the vaccine came over the holidays as the state worked to administer vaccines quickly to frontline health care workers. As of Saturday, the state had received 159,800 doses of vaccines and had administered 64,657, according to the Centers for Disease Control and Prevention. Although the Moderna product is sometimes described as a “genetic” vaccine, it does not alter a person’s genes in any way.

The vials, which contained 570 doses of vaccine and which prosecutors said were worth between $8,000 and $12,000, were discovered sitting out on Dec. 26. Five days later, Mr. Brandenburg was arrested on felony charges of reckless endangerment and property damage, though prosecutors on Monday said the charges could be dropped to a single misdemeanor if the vials, which have yet to be tested, are still usable.

The prosecutor, Adam Gerol, said that Mr. Brandenburg was “pretty cooperative and admitted to everything he’d done,” and that “he expressed that he was under great stress because of marital problems.” He said that according to co-workers, Mr. Brandenburg had brought a gun to work on two prior occasions.

Last month Mr. Brandenburg told his wife, who is in the process of divorcing him, that “the world is crashing down around us,” according to a motion she filed last week asking for sole custody of the couple’s two daughters, 4 and 6, after she learned he was under investigation in the incident at the hospital. She said she feared his reaction if he lost his job.

In her motion, Gretchen Brandenburg said that on Dec. 6, her husband picked up the children and dropped off a water purifier, a large bucket of powdered milk and two 30-day emergency buckets of food.

“He told me that if I didn’t understand by now that he is right and that the world is crashing down around us, I am in serious denial,” she said in an affidavit. “He continued to say that the government is planning cyberattacks and plans to shut down the power grid.”

She asked that his time with their children be supervised, saying he had made alarming remarks. The six-year-old had quoted him as saying, “This is not our home; heaven is our home,” and “All the bad angels and the devil are going to burn in the lake of fire forever,” she wrote.

“I was so concerned about my safety and the safety of our children that I left town for a period of time,” she wrote.

The Brandenburgs married in 2012, and Ms. Brandenburg filed for divorce last June. At a hearing in July, her lawyer testified that his client feared Mr. Brandenburg’s “temper” and said the parties have “vastly different views regarding parenting and views of the world.”

“My understanding is that the respondent is more aligned with the feeling of conspiracy theories,” the lawyer, Brian Herro, said. “He has theories about Covid-19. He believes the end of the world is coming. So my client would like him to be out.”

In an order signed Monday, the family court granted temporary sole custody to Ms. Brandenburg, finding that the children were in “imminent danger of physical or emotional harm.”

But the criminal court granted Mr. Brandenburg release on a promise to pay $10,000 if he did not show up for his next hearing, on Jan. 19. He was ordered to surrender any firearms; the prosecutor said the police had already confiscated some of his guns. 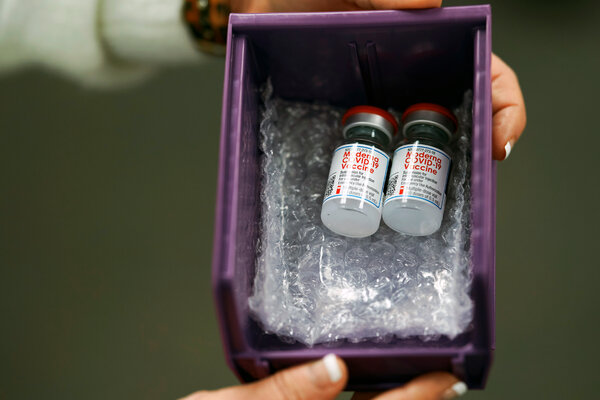 The Moderna vaccine must be kept frozen or refrigerated until it is used, though it does not require subarctic temperatures like the Pfizer vaccine does. The hospital has said that 57 people received injections of the compromised vaccine, but that Moderna had reassured officials that they would not harm the individuals who received them.

Hospital officials at first believed that the vials were left out inadvertently, but upon further investigation determined that the act had been intentional. They said the pharmacist was no longer employed.

In a July divorce hearing dealing with multiple issues, including whether Mr. Brandenburg should be required to move out of the family home, he talked about the pressure of his job, working from 9 p.m. to 7 a.m. “It’s not easy, especially with all of the other stress going on, in order to get enough sleep to function for work,” he said. “And if I make mistakes at work — I’m a hospital pharmacist at Grafton, right? — I’m responsible for life and death issues.”

The incident raised new fears of inadequate security for the vaccine. Last Thursday, in a video call with reporters, Jeff Bahr, the president of Aurora Health Care Medical Group, defended the hospital system’s protocols. “It’s become clear that this was a situation involving a bad actor, as opposed to a bad process,” he said.

The scarcity of supply has led some officials to store the vials at undisclosed locations, install security cameras and tracking systems or restrict access. Early in December, Interpol warned nations to prepare for attempts by organized crime rings to target vaccine supply chains. But most of the attention has focused on attempts to steal or divert the vaccine, not tamper with it.

Wisconsin experienced a surge of coronavirus cases in the fall, and at times has been one of the hardest-hit states in the nation relative to its population. Transmission has since slowed a bit, but the state is still reporting about 43 new cases a day for every 100,000 people. At least 5,264 Wisconsin residents have died.