ZUMWALT PRAIRIE, Ore. — Aiming a rifle loaded with a copper bullet rather than the standard type made of lead, Chelsea Cassens fired at an elk from 70 yards away, hitting it squarely behind its shoulder. To avoid spooking the animal if it was only injured, Ms. Cassens waited several minutes before approaching as her father needled her skeptically, suggesting her newfangled ammunition might not have immediately killed it.

Moments later, Ms. Cassens, her father, Ed Hughes, and the three others in their hunting party descended on the fallen 450-pound beast, carved it open, inspected the internal damage, and found the spent bullet.

“Will you look at that!” Mr. Hughes said, pleasantly surprised. The copper bullet had expanded on impact, as it was designed to do, opening a gaping hole in the elk’s lungs and killing it almost instantly.

“Her bullet did the trick just fine,” Mr. Hughes, 63, conceded, adding later that he also planned to switch from lead to copper bullets, a transition more and more hunters are making amid mounting evidence that lead bullets are poisoning the wildlife that feed on carcasses and polluting the game meat that many people eat. 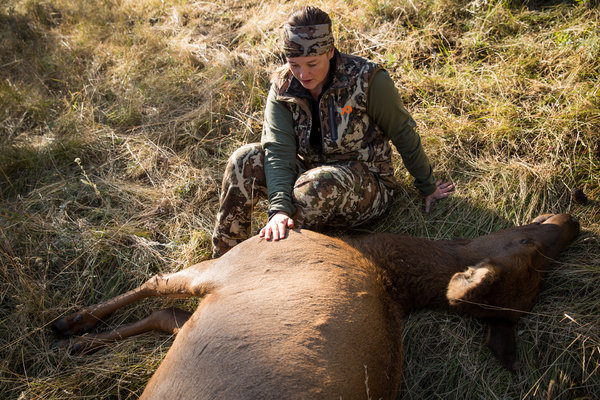 At least 30 states regulate the use of lead ammunition, including Oregon, where Ms. Cassens and her father met for a weeklong elk hunt this fall. In Oregon, hunters are not allowed to fire lead bullets in a number of state wildlife areas. Neighboring California, which already enforces some of the nation’s most restrictive gun laws and was the first state to prohibit lead ammunition in specific regions, recently imposed a statewide ban on that type of bullet that will go into effect next July.

Across the country, state wildlife agencies have tried a range of tactics to encourage hunters to switch from lead ammunition. In Arizona, non-lead ammunition is free in some areas, and is delivered in bulk to a Native American tribe that lives near habitats with the most vulnerable scavenger species. In Minnesota, game wardens host shooting clinics for hunters to compare copper and lead bullets, hoping to show that lead bullets break apart in ways that make them more prone to contaminate the animals they kill.

According to the United States Fish and Wildlife Service, lead exposure is the leading cause of death in California condors, the largest land birds in North America, which three decades ago were on the brink of extinction. And between 10 million and 20 million animals, including eagles, hawks, bears, vultures, ravens and coyotes, die each year not from being hunted, but from lead poisoning, according to the Humane Society.

Yet many hunters are reluctant to stop using lead bullets. They cite a range of reasons, from being unaware of the potential health threat or harm to scavenger animals, to having a stockpile of traditional ammunition they do not want to waste. Some also see the push away from lead bullets as a ruse for limiting gun rights or banning hunting more broadly. And many hunters question the availability, accuracy, price and lethality of non-lead ammunition.

Indeed, regulating lead ammunition has long been a hot-button point of contention among both conservationists and hunters. The topic was so charged, in fact, that President Barack Obama’s administration waited until its last day in office to impose a ban on lead ammunition on federal land. Just hours after taking office as the Trump administration’s new secretary of the interior, Ryan Zinke overturned that prohibition in his first action.

And in California, the organization representing the state’s game wardens has pushed back against the impending statewide ban, breaking ranks with the California Department of Fish and Wildlife and writing in a letter to the governor that there is “insufficient data to justify such a drastic action.”

About 95 percent of the 10 billion to 13 billion rounds of ammunition purchased every year in the United States contain lead, which primarily comes from recycled car batteries, according to industry estimates. These bullets are often jacketed by a harder metal like copper or steel.

[Read: Millions of weapons aficionados reload their own bullets and cast their own ammunition.]

Before starting the elk hunt, Ms. Cassens, 33, who has been hunting since she was 10 years old and had always used lead bullets, was joined by Leland Brown, an avid hunter and the non-lead hunting education coordinator for the Oregon Zoo. She fired both lead and copper ammunition into water jugs to compare the amount of metal fragments that splinter off during penetration.

A lead bullet fired from Ms. Cassens’ Remington .30-06 rifle, Mr. Brown explained, often sheds nearly a third of its original weight — more than enough to kill a bird if it consumed the particles.

Still, despite the growing evidence and legislative regulations, a nonprofit created by the firearms industry has challenged much of the scientific research into the risks of lead ammunition. The group’s website, Hunt for Truth Association, claimed that lead used in bullets is not sufficiently soluble to dissolve in most animals’ digestive tracts. If poisoning occurs in the wild, it is more likely from other soluble sources like leaded gasoline, paint, pesticides, landfills, mining tailings, or illegally dumped lead acid batteries, said the website, which was recently taken down.

Lynn Tompkins, who runs a bird rehabilitation center called Blue Mountain Wildlife in Pendleton, Ore., rejected those ideas. She held up photographs of X-rays of birds with lead bullet fragments in their stomachs, and said that roughly half of those she treats have lead poisoning. Often they are partly paralyzed and emaciated, she said, because the lead disorients the birds, making them incapable of hunting.

“I’m not opposed to hunting,” she said, “but we moved away from lead in gasoline, paint and plumbing and now we need to do the same with ammunition.”

Wildlife authorities have at times also been reluctant to embrace bans on lead ammunition for fear that forcing non-lead ammunition on hunters may cause them to stop hunting altogether. Revenue from hunting is vital to conservation programs, enforcement and research. Many wildlife officials are themselves proud hunters and do not want to contribute to the decline of this pastime, not to mention the practical role that hunting plays in conservation efforts like the one at the 33,000-acre Zumwalt Prairie Preserve, run by The Nature Conservancy in Wallowa County, Ore.

Working with state wildlife authorities, the conservancy grants access to roughly 250 hunters each year as part of an effort to control the number of elks, who overgraze the land, destroying much of the aspen and woody shrubs that birds, insects, and small animals need to survive. When hunters arrive, they are required to check in with the conservancy’s staff and if they show they are using non-lead ammunition, they are entered into a drawing for cash-card prizes. Slightly more than half of the hunters have switched to lead-free ammunition.

Similar incentives are offered in Utah, where prizes in a raffle conducted by state wildlife authorities include new rifles and all-terrain vehicles for hunters who participate by either using non-lead ammunition or removing gut piles, the remains left behind after a hunter strips the animal’s carcass of its meat, which are often laden with lead bullet fragments.

Court battles over the regulation of lead ammunition have raged for years. In 2012, a coalition of environmental groups sued the federal government in a bid to force the Environmental Protection Agency to regulate lead bullets under the Toxic Substances Control Act. An appellate court ruled two years later that the agency lacked the authority to regulate bullets under that law. That same year, Mr. Obama signed a defense budget bill that included language prohibiting the E.P.A. from banning lead ammunition under the Toxic Substances Control Act.

For Ms. Cassens, the turning point came when she met Mr. Brown at the Zumwalt Prairie Reserve. He had a binder that she flipped through, a collection of X-rays that showed lead flecks in game meat that had been randomly selected and was donated to food pantries.

She said she feeds her two children and husband game meat most nights of the week, estimating that she saves at least $1,500 a year by not buying meat from grocery stores.

But the possibility of threatening her family’s health was too much.

“As a nurse and a mother,” she said, “I know that no amount of lead is safe to consume.”

Ian Urbina is an investigative reporter who joined The Times in 2003. He won a 2015 Polk Award for The Outlaw Ocean series about lawlessness at sea, and was part of the team awarded a 2009 Pulitzer Prize for coverage of the Eliot Spitzer prostitution scandal. @ian_urbina • Facebook