A man was fatally shot by the police after he opened fire near a crowd of hundreds of people gathered for a Christmas concert outside the Cathedral of St. John the Divine in Morningside Heights on Sunday afternoon, the authorities and church officials said.

It was not immediately clear if the gunman was shooting at people in the crowd. Mark D. Levine, a city councilman who represents the Manhattan district where the church is located, said the man appeared to be mentally ill and had climbed scaffolding at the church before firing “indiscriminately in the air” and yelling that he wanted to be killed.

The man shot at police officers who responded to the scene and officers returned fire, the authorities said.

The shooting began minutes after the end of the concert, said Lisa Schubert, a cathedral spokeswoman who witnessed the incident.

“It was just beautiful, and then at the end this person started shooting. Everybody is in shock,” she said. “The shooter could have killed a lot of people. There were hundreds of people here and he shot at least 20 times.”

Ms. Schubert said she was standing on the driveway of the cathedral when the shooting began.

“We had been planning this concert for weeks as a gift to the community, and the weather was beautiful, so the whole community was out, physically distanced with masks, people with dogs and people with babies,” she said. “It was something like we haven’t seen since last March.” 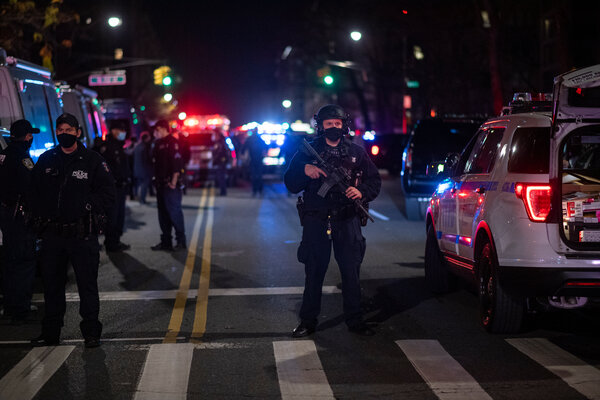 The Cathedral of St. John the Divine is the seat of the Episcopal Diocese of New York, and many of the leaders of the diocese were present for the concert and witnessed the shooting, including the Rt. Rev. Clifton Daniel III, the dean of the cathedral, and the Rt. Rev. Andrew M.L. Dietsche, the bishop of New York. Both men declined to speak to a reporter on Sunday.

“The Cathedral of St. John the Divine parishioners, concert audience, clergy and staff are all safe after a shooting at our outdoor Christmas Carols for the Community Concert today,” Isadora Wilkenfeld, another spokeswoman, said in a statement. “Our prayers are with all those affected by this.”

Gale Brewer, the Manhattan borough president, wrote on Twitter that her chief of staff and press secretary were both at the church when the shooting took place and were safe.

“We don’t have a lot of information but our gratitude goes out to first responders,” Ms. Brewer said.