OTTAWA — Pope Francis will meet with Indigenous leaders later this year to discuss coming to Canada to apologize for the church’s role in operating schools that abused and forcibly assimilated generations of Indigenous children, a step toward resolving the grievances of survivors and Indigenous communities, the head of Canada’s largest Indigenous organization said on Wednesday.

In a statement, the Canadian Conference of Catholic Bishops said that the pope will meet separately at the Vatican with the representatives of Canada’s three biggest Indigenous groups — the First Nations, the Métis and the Inuit — during a four-day series of meetings in December that will culminate in a joint session with all three.

“Pope Francis is deeply committed to hearing directly from Indigenous Peoples, expressing his heartfelt closeness, addressing the impact of colonization and the role of the Church in the residential school system,” the bishops wrote.

Canada’s Indigenous leaders have long called for a papal apology for the church’s role in the residential schools, a government-created system that operated for about 113 years and that a National Truth and Reconciliation Commission called “cultural genocide.”

Those calls have intensified since May, following announcements by three Indigenous communities that ground penetrating radar has revealed many hundreds of unmarked graves containing human remains, mostly of children, at the sites of former schools in British Columbia and Saskatchewan. While both disease and violence were widespread at the schools, the scans offer no information about how the children died.

Catholic orders ran about 70 percent of the schools on behalf of the government. Despite a direct plea from Prime Minister Justin Trudeau in 2017, the pope has consistently refused to apologize for the church.

Three Protestant denominations that also ran residential schools apologized long ago and contributed millions of dollars to settle in 2005 a class-action suit brought by former students.

The Catholic Church, however, has since raised less than four million Canadian dollars, or $3.2 million, of its 25 million dollar share of the settlement.

The delegation of Indigenous leaders will push the question of compensation at the Vatican meetings, said Perry Bellegarde, national chief of the Assembly of First Nations, Canada’s largest Indigenous organization. However, their focus will be on persuading the pope to come to Canada to apologize.

The news of the Vatican meeting came as the third Canadian Indigenous community announced on Wednesday that it had found 182 human remains near a former school for Indigenous children run by the Catholic church.

At the St. Eugene’s Mission School, located in British Columbia on the land of a First Nation which renders its name as ʔaq’am, Indigenous leaders said that a search that started last year has found 182 unmarked graves, some of them just three to four feet deep. 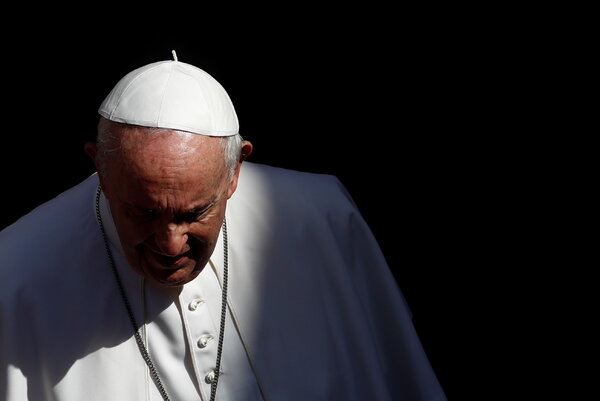 Chief Bellegarde said that the Indigenous groups had been trying for two years to schedule this meeting with the pope. But he said that it remains unclear which, if any, of their requests that the pope will agree to.

“There are no guarantees of any kind of apology or anything coming forward, there’s no guarantee that he’ll even come back to Canada,” Chief Bellegarde said. “But we have to make the attempt and we have to seize the opportunity.”

The remains of what are presumed to be Indigenous children have been discovered at the sites of defunct boarding schools in Canada. Here’s what you should know: