Violent clashes have erupted between left-wing and right-wing protesters in Portland, Oregon – prompting authorities to force them away from a plaza near a federal building.

The area, which has been the site of numerous recent protests, houses both county and federal buildings.

Protests against police brutality and racism began several months ago, in response to the killing of George Floyd in Minneapolis. 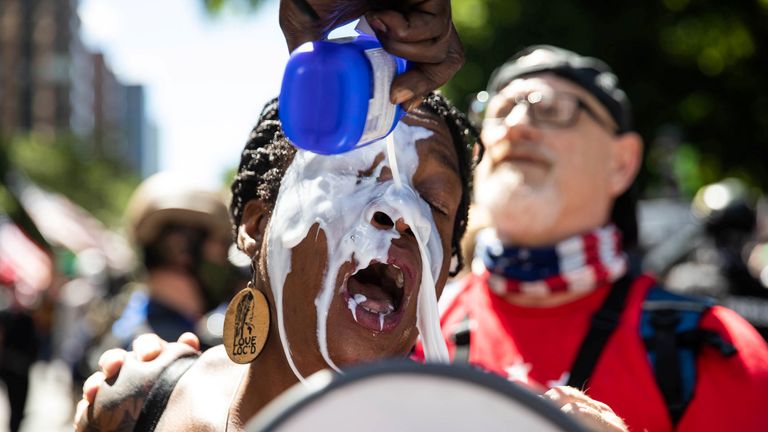 Demonstrations kicked off around midday near the Multnomah County Justice Center in Oregon‘s biggest city, according to local media.

Fights quickly broke out with demonstrators hurling rocks and other missiles at one another.

Photos showed hundreds of people on the streets, many of them wearing helmets and carrying makeshift shields.

There was evidence that pepper spray was used, with some protesters flushing their eyes in the street.

Police warned they would use crowd control weapons if violence didn’t end. Streets were closed as the demonstration moved into other areas during the afternoon.

There were reports that at least one person used a gun to threaten others, but no arrests were made. The Justice Center has been the target of left-wing protesters over the last few weeks, leading to numerous clashes with federal agents.

It houses a police precinct, police headquarters, a county jail and courtrooms and is next door to a federal courthouse.

Saturday’s rally attracted various groups from both sides of the political divide including the Proud Boys and QAnon right-wing groups, and left-wing protest groups Democratic Socialists of America and Popular Mobilization.

Portland Police put out a statement to explain their decision not to intervene, saying: “In this case there were hundreds of individuals and many weapons within the groups and an extremely limited amount of police resources actually available to address such a crowd.

“Additionally, [officers] have been the focus of over 80 days of violent actions directed at the police, which is a major consideration for determining if police resources are necessary to interject between two groups with individuals who appear to be willingly engaging in physical confrontations for short durations.” 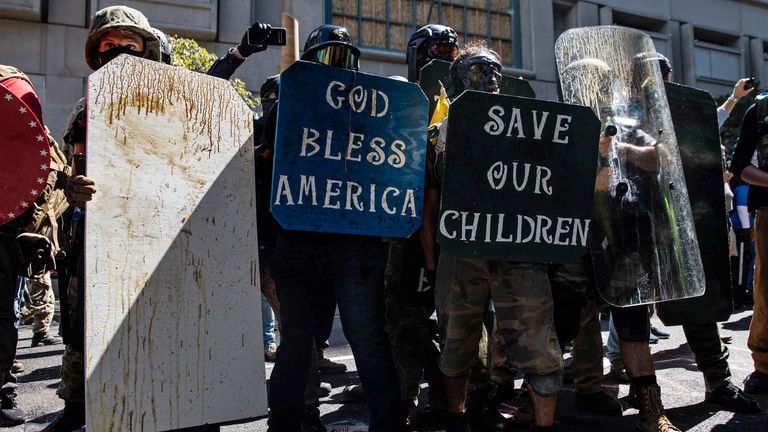 Some felt the incident should have been declared a riot.

The clashes had followed an early morning confrontation between police and around 200 left-wing protesters in another area.

Nine people were arrested during that clash, with several police officers suffering minor injuries. One protester, who threw rocks at officers, was shot with a “sponge-tipped less-lethal round” according to a police statement.