Over two years, York trekked some 8,000 miles from St. Louis to the Pacific Northwest and back, hunting, tracking, foraging and, at least once, voting as a Black man held in bondage by another, more famous member of the Lewis and Clark expedition.

Last weekend, almost 215 years after the group made it back to Missouri, a large bust of York was raised in a Portland, Ore., park without fanfare or explanation, on the spot where a statue of a prominent conservative had been toppled last year. City leaders, acknowledging that they had no idea who put the monument to York there, said it looked great.

“This is what we’re calling guerrilla public art, but it was a pleasant surprise,” said Adena Long, the director of Portland’s parks bureau. York, she said in an interview, is “a figure that in my mind that we need to do a better job of proactively and thoughtfully celebrating.”

Ms. Long said that she was not aware of any message about the bust from those responsible, but that it would be allowed to stand so long as it does not pose any safety risks, in line with a bureau policy regarding tributes. “We’re hopeful the artists will make themselves known so we can have a conversation, but it will stay,” she said.

Park officials, who received word of the bust on Saturday morning, believe it was installed the night before. The bust, apparently made of hardened plastic, portrays York as bald and looking down with a somber expression, above a plaque describing him as “the first African-American to cross North America and reach the Pacific Coast.”

The artwork “should make all of us reflect on the invisibility and contributions of Black, Indigenous, Latinx and other Oregonians of color,” Carmen Rubio, the city’s commissioner of Bureau of Planning and Sustainability, said in a statement on Saturday. “We should regard this installation for both the important piece that it is, as well as a much-needed reminder to city leaders to hasten our work of rooting out white supremacy in our institutions.”

The bust of York was erected on a pedestal in the city park on Mount Tabor, where there had stood a statue of Harvey Scott, a conservative 19th-century newspaper editor who opposed women’s suffrage, free high schools and prohibition. (His sister, Abigail Scott Duniway, became a champion for women’s rights in the Pacific Northwest.)

The statue of Scott, installed in 1933 by the Mount Rushmore sculptor Gutzon Borglum, was brought down last fall as protests around the country, demonstrating against racism, targeted monuments depicting Confederate leaders, Christopher Columbus and other historical figures. In Portland, where demonstrations lasted months, protesters toppled statues of George Washington, Thomas Jefferson, Theodore Roosevelt and Abraham Lincoln.

“It’s a great discussion, but the removal of statues needs to come with a process,” said Kerry Tymchuk, the executive director of the Oregon Historical Society, which was itself vandalized in October. He said that the society welcomed debate and conversation, but that there should be at least some formal rules for re-evaluating monuments in public spaces. 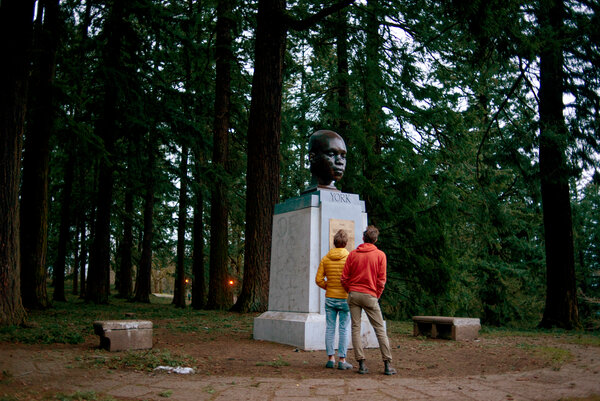 “It can’t just be free game for anybody to take a statue down or put a statue up — it’s an invitation for chaos,” he said. “What if they had put somebody else up besides York?”

Ms. Long said that officials would consider any installations on a case-by-case basis and that conversations about Portland’s monuments had begun among city agencies. “We here at the City of Portland respect people’s right for expression,” she said. “I can’t really make a blanket statement.”

In a few cases around the world, activists have replaced fallen monuments with new installations. Last year in Bristol, England, for instance, a statue of a Black Lives Matter protester briefly replaced one of a 17th-century slave trader. A day later, the authorities removed the new statue.

There are a handful of other monuments to York around the country, including at Lewis & Clark College in Portland and on the waterfront in downtown Louisville, Ky. There is no record of what York looked like, and historians have little documentation of his life. Members of York’s family were probably enslaved by the Clark family in Kentucky, and both he and the man who kept him enslaved, William Clark, were probably born in 1770. In 1803, when Thomas Jefferson commissioned an expedition west, Clark set out from St. Louis, taking York with him.

Journal entries by expedition members show York performed many of the same duties as others, including hunting with a firearm, preparing meals and helping with medical work. In one entry, Clark wrote that York helped search for expedition members caught in a flash flood.

At another point, deciding which route to take, the expedition members took a vote: Their records show that York and Sacagawea, a Shoshone woman who interpreted for and guided the group, took part.

The accounts suggest that, on the expedition at least, York was afforded more freedom than during his life in the East.

“It’s clear that York became a trusted member of the expedition,” said Peter Kastor, a historian at Washington University in St. Louis and the author of a book about Clark’s exploration.

But on the expedition’s return to St. Louis, in 1806, Clark refused to grant York the freedom he had most likely promised him, Mr. Kastor said.

“York repeatedly asked Clark to free him, asked Clark to let him travel,” including to see enslaved family members, he said. “Clark said no, which was typical behavior of a planter.”

About a decade after their return, Clark freed York, at which point his story grows even more unclear. “There’s absolutely no provable definitive account of his fate,” said Darrell Millner, a professor emeritus of Black studies at Portland State University.

The author Washington Irving, who met with Clark in 1832, wrote in his notes that Clark had helped York start a business back in Kentucky. Irving also wrote that York had at some point returned to St. Louis and perished of cholera.

In another telling, York returned West and joined a Native nation. “But there are many good reasons to doubt that was the reality,” said Mr. Millner, who noted that of the Black men who traveled West, “some of them didn’t hesitate to claim they were York to their advantage.”

Mr. Kastor said that the story of York was “erased from popular memory” in the 19th century. It was brought to light by 20th-century historians, he said, “partly as an effort to inscribe the experience of African-Americans and Native Americans into the record, but it was also an effort to say, ‘If we look at this expedition we can see the prospects of racial equality and reconciliation.’”

That view of the expedition, he said, “papered over the reality that Lewis and especially Clark were active participants in slavery.”

He and Mr. Millner welcomed the new installation. “He’s an important part of American history and Western history,” Mr. Millner said, adding that it was good for York to have “a little publicity into the 21st century.”