It seemed hard to believe that a tiny Chihuahua described as a “man hating, animal hating, children hating” dog, a 13-pound “rage machine” and the “vessel for a traumatized Victorian child” could find a home.

Weeks after the Second Chance Pet Adoption League in Oak Ridge, N.J., posted an adoption ad describing him that way, Prancer the dog was taking a morning walk on Wednesday on a downtown street in Connecticut.

At the other end of the leash was Ariel Davis, 36, who refers to herself as “mom or owner” after she adopted Prancer on April 17 and took him to New Haven, where she lives with a female roommate in an apartment with a backyard and no other pets. Or children. Or men.

“I thought I could probably give him a good place,” said Ms. Davis in an interview, steering Prancer away from his favorite spot to relieve himself: the neighbors’ flowers. “It was kind of meant to be.”

Ms. Davis was one of the hundreds of thousands of people who read, shared and retweeted the advertisement, written by a volunteer who was fostering him.

“There’s not a very big market for neurotic, man hating, animal hating, children hating dogs that look like gremlins,” the volunteer, who identified herself as Tyfanee Fortuna, wrote in a post that has been shared on the adoption center’s Facebook page, her own account and on other sites earlier this month.

“But I have to believe there’s someone out there for Prancer, because I am tired and so is my family. Every day we live in the grips of the demonic Chihuahua hellscape he has created in our home,” she wrote. “I am convinced at this point he is not a real dog, but more like a vessel for a traumatized Victorian child that now haunts our home.”

His story was covered by national media and television stations. Fans posted greetings from their own dogs saying “hello” to Prancer on the We Rate Dogs account on Twitter. Prancer’s face now adorns T-shirts that the adoption center uses for fund-raising.

“Our little red plague is still spreading even after adoption,” the center wrote on Facebook, linking on Tuesday to a U.K. newspaper article about Prancer. 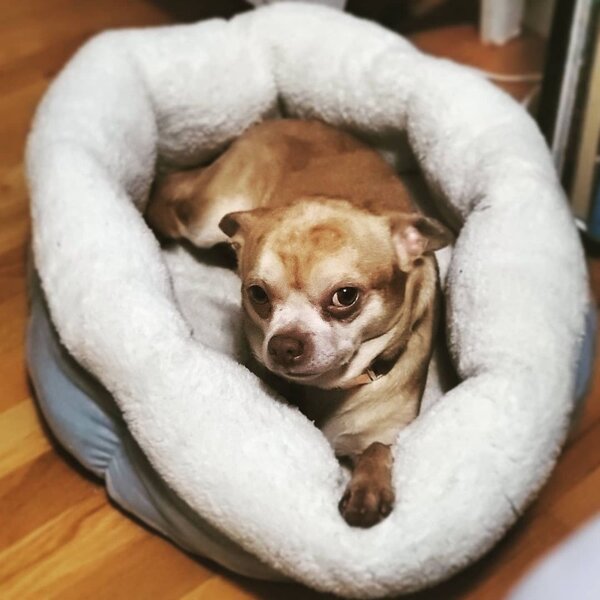 And just as Ms. Fortuna had hoped, there was someone out there for Prancer.

Ms. Davis, who works as a sous chef at a women’s rehabilitation center near her home, had been looking for a dog. She saw a news article about Prancer and was undeterred by the negative qualities advertised. To be fair, Prancer was also said to be loyal and to “smile” when excited.

The adoption center said it had hundreds of email inquiries from all over the world about adopting Prancer, although only a handful applied. On April 13, Ms. Davis was one of them.

She wrote in her email to the center that she was brought to “near tears” reading about him, and that he reminded her of her previous dogs.

“I am open and loving to all dispositions,” she wrote.

When asked in the application survey what issues could cause her to have to return the dog, she replied: “None, save my own death.”

The adoption went through.

On April 17, a Saturday, Ms. Davis was given an appointment and drove two hours to meet Prancer. Intent on a soft entry, she had researched how to handle “small, neurotic dogs,” she said. When she arrived at the center, she made no eye contact with him. She spoke only to staff members at first, letting Prancer get accustomed to her being in the room.

“I had first-date butterflies,” Ms. Davis said. “I didn’t know if it was going to work.”

But it did. Ms. Davis had brought food — eggs and sausage — to share with Prancer.

“We had brunch together,” she said. “And then we went for a walk.”

The union was sealed, even though he was not too fond of being petted, she said. When they returned to her apartment, Ms. Davis adapted to Prancer, rather than the other way around.

She keeps his toys minimal (“he is not really a toy dog”) and she has learned to devote a solid 10 minutes to doggy kisses when she gets home from work, where the flexible hours mean she can “take care of my little demon monster.”

With the benefit of some time together, “I can see how the ad is very accurate,” Ms. Davis said. “If I had a bunch of dogs and cats, he would be wild, crazy and demonic. But he is an only child right now. He is very content to hang out and be peaceful.”

The rest is internet history.

Now, Prancer has his own Instagram account with more than 50,000 followers on Wednesday. His photo collection shows him clearly living his best life. He wears a bow tie, cuddles on blankets, has a wardrobe that includes at least one collared shirt, takes car rides and trips to McDonald’s and commands attention in the middle of a room, appearing, of course, like a very good, and only mildly demonic, boy.

As Ms. Davis and Prancer continued their morning walk during the interview, Ms. Davis agreed to put the dog on speaker phone, to see whether hearing his name could get him to wag his tail.

He had no reaction at all, Ms. Davis said.

“He is more interested in sniffing a tree,” she said.