By Jim Tankersley and Marie Fazio 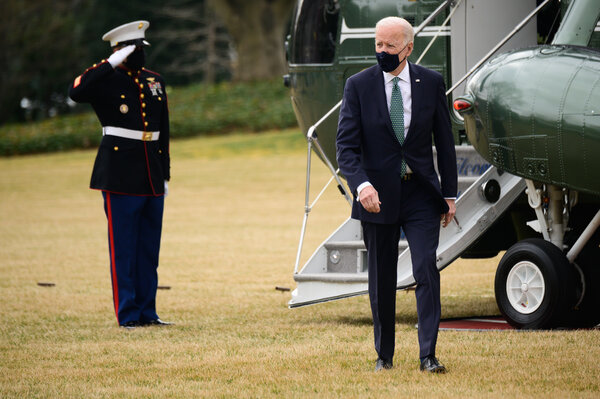 President Biden said on Wednesday that “the question of motivation is still to be determined” in the Georgia shootings, while renewing his concerns over a recent surge in violence against Asian-Americans.

Mr. Biden told reporters ahead of a virtual meeting with the Irish prime minister that he had been briefed by the attorney general and the F.B.I. director about the shootings, and that an investigation was ongoing.

“Whatever the motivation here,” he said, “I know Asian-Americans are very concerned. Because as you know I have been speaking about the brutality against Asian-Americans for the last couple months, and I think it’s very, very troubling. But I am making no connection at this moment to the motivation of the killer. I’m waiting for an answer from — as the investigation proceeds — from the F.B.I. and from the Justice Department. And I’ll have more to say when the investigation is completed.”

In his first prime-time speech as president last week, marking a year of the coronavirus pandemic, Mr. Biden denounced “vicious hate crimes against Asian-Americans, who have been attacked, harassed, blamed and scapegoated.”

“At this very moment, so many of them — our fellow Americans — they’re on the front lines of this pandemic, trying to save lives, and still they are forced to live in fear for their lives just walking down streets in America,” he said. “It’s wrong, it’s un-American, and it must stop.”

Vice President Kamala Harris, the first woman and the first Asian-American to hold the office, expressed condolences for the families of the victims during a meeting with Irish officials on Wednesday.

“This speaks to a larger issue which is the issue of violence in our country and what we must do to never tolerate it and to always speak out against it,” Ms. Harris said, adding that the motive in the shooting was still unclear.

“I do want to say to our Asian-American community that we stand with you and understand how this has frightened and shocked and outraged all people,” she added.

“I want to start by saying something directly to the families of the shooting victims in Atlanta last night,” Dr. Biden said. “My heart is with you. And I hope that all Americans will join me in praying for everyone touched by this senseless tragedy.”

Former President Barack Obama called on the country to enact “common-sense gun safety laws and root out the pervasive patterns of hatred and violence in our society.”

“Even as we’ve battled the pandemic, we’ve continued to neglect the longer-lasting epidemic of gun violence in America,” he wrote on Twitter on Wednesday morning. “Although the shooter’s motive is not yet clear, the identity of the victims underscores an alarming rise in anti-Asian violence that must end.”