EL CENTRO, Calif. — Donald Trump was on the television, but no matter. Ferdinando Galeana’s customers were watching their plates, not the president.

As Mr. Trump delivered an ominous State of the Union address from Washington, which warned repeatedly about the dangers along the southwest border, Mr. Galeana dutifully tended to orders of tacos, horchata and micheladas at D’Poly, the Mexican eatery his family runs here about 10 miles from the Mexican border. What the president was saying on the screen behind him, said Mr. Galeana, would not help his small business, his family or his five dozen employees.

“What we need here is someone to help people looking for jobs,” said Mr. Galeana, whose wife and American-born children work with him at the restaurant. “The things he says, they make me laugh.”

Residents of El Centro and several other towns along the California-Mexico border have watched with curiosity and apprehension in recent years as the president has escalated his calls for a wall along the southwest frontier. Mr. Trump repeated his warnings about such perils again Tuesday.

“Republicans and Democrats must join forces again to confront an urgent national crisis,” Mr. Trump said during his speech, delivered not long after a bitter impasse over funding for a border wall that shut down the government for 35 days. “Congress has 10 days left to pass a bill that will fund our government, protect our homeland, and secure our very dangerous southern border.”

[Sign up for Crossing the Border, a limited-run newsletter about life where the United States and Mexico meet.]

On a busy Tuesday night at D’Poly, patrons occasionally glanced at the screen that played the president’s address to the nation. Most paid it no mind at all. Mr. Galeana and others said they had largely tuned out what the president has to say because, too often, his rhetoric is disconnected from what their communities really want. They have struggled to reconcile the president’s warnings about threatening conditions on the border with their own experiences living in this quiet, largely agricultural hamlet. 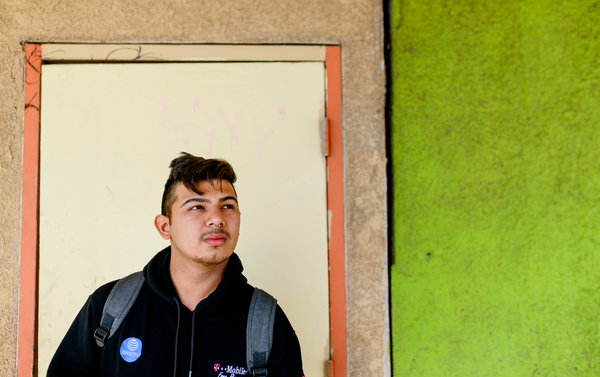 “What he’s saying on the news is different from what we’re seeing here,” said Cecy Magallanes, 45, who is originally from Mexicali, not far across the border in Mexico, and works as a school bus driver.

She said Mr. Trump’s previous calls for a border wall seemed “like a strategy to get votes.”

Located on El Centro’s Main Street, D’Poly and its clientele embody the biculturalism of border towns across the Southwest. Farm workers, white-collar professionals, big families and off-duty Border Patrol agents congregate here for tacos, sopes and flavored juices. Modern and minimalist, the restaurant’s gray walls and dark wood floors could be the backdrop of an elegant Crate and Barrel photo shoot — save for an arresting pink mural of Frida Kahlo that instantly sets the room apart. Flashes of pastel pop from behind a tiled bar, which includes a display of “Dia de los Muertos” statuettes.

English and Spanish are heard virtually interchangeably at table after table. Latin pop plays in the background, songs like “Dónde Estarás” by the Mexican electrocumbia musician Raymix.

Mr. Galeana, who owns the restaurant along with his wife, Teresa, said he and his family decorated with the idea of showcasing Mexican culture in a modern setting, a concept that “so often is lost” in Mexican restaurants in favor of stereotypical décor like sombreros.

“Our idea was to show that Mexico is not just what the stereotypes say: It’s so much more,” he said. “We are proud of our culture, and we want to show that.”

That is what many of those here say they wish the president understood: Immigration and cross-national exchanges are celebrated in these towns along the border.

Hildy Carrillo, the executive director of the Calexico Chamber of Commerce, has been sharply critical of President Trump’s immigration policies. She watched with exasperation last year when Mr. Trump called the replacement of the town’s border barrier “the start of our Southern Border WALL!” She said she feared the president’s remark would turn Calexico into an anti-immigration symbol and make it seem unsafe.

For that reason, Ms. Carrillo, a Democrat, chose not to watch the speech Tuesday — “one of the few I’ve ever missed,” she said. She went shopping instead, she said, because “I refuse to get stressed out having to listen to him.”

Though the region is heavily Democratic in numbers, there has been plenty of common ground between Democrats and Republicans on border security here in the past. Many people in the region, including Mexican immigrants, say they understand the desire for strong border security. But in conversations Tuesday, even those who agreed with some of the president’s positions were quick to point out that his statements about immigrants, and Mexicans in particular, made them disinclined to support him.

Aleyda Montejano, 21, who is Mexican-American, lives in the town of Imperial but goes to hairstyling school in Mexicali because it is less expensive. She said that she agreed with the president that there needed to be a deterrent to illegal immigration. But she said that message was difficult to separate from his tone.

“The way he talks about Mexicans, I just don’t agree with it,” she said. “The reason people come here is to have a better life. But, about the border, there are some people that cross illegally and that’s not right.”

Brian Arturo Posada, 19, an American citizen who grew up in Mexicali, said that he was sympathetic to some of the things Republicans in Washington talk about, like preventing abuse of social benefits such as unemployment insurance. But he said the president’s tone in past speeches too frequently crossed the line when he talked about immigrants and Mexican laborers.

“The only thing that really I didn’t like was when he said all Mexicans are gangsters,” he said. “That’s not true, it’s not true. And when he was keeping those kids in jails, that made me really mad.”

Meanwhile, several Mexican laborers in the region said they fear that the president’s warnings about immigrants and crime exasperates discrimination against them.

Cristina Bejarano, 34, a Mexican laborer who picks cilantro and lives in Calexico, about 12 miles south of El Centro, said that life for her and other immigrants in the region can be difficult because of the nature of farm work. But she said she moved to the United States two years ago because, even if farm labor is backbreaking, her life and prospects are better here than in Mexico.

She said she wished President Trump and others could understand that.

“A lot of people haven’t had a chance to meet any Mexicans,” Ms. Bejarano said. “They say we’re all criminals when we’re not. Just because we’re brown doesn’t mean we’re dirty.”