WASHINGTON (REUTERS) – US President Joe Biden on Wednesday (April 14) named a liaison to Asian Americans, who are contending with rising violence, after facing pressure to ensure greater diversity among top administration officials.

In a statement, the White House said Ms Moritsugu would be “a vital voice” to advance the administration’s priorities.

Ms Moritsugu’s hire coincided with White House efforts to mollify concerns among Democrats over Asian American representation in the administration’s senior leadership after the community was targeted in the aftermath of lockdowns to cope with the novel coronavirus, which was first identified in China in 2019.

Mr Biden tapped Ms Kamala Harris, an Asian American as his vice-presidential running mate, and he has named other officials of Asian descent to top jobs, including Trade Representative Katherine Tai and Surgeon-General Vivek Murthy.

Yet, other than Ms Harris, Mr Biden’s senior-most “permanent” Cabinet positions include no Asian Americans.

Ms Moritsugu was most recently vice-president at National Partnership for Women & Families, a non-profit where her portfolio included congressional outreach and advocacy on policy issues affecting women of colour.

She also has significant experience on Capitol Hill, including working for Senator Tammy Duckworth, a Democrat who had threatened to block Mr Biden’s nominees over insufficient Asian American representation in his administration. Mr Duckworth dropped that ultimatum after Mr Biden agreed to create the new liaison role.

Mr Biden has promised action on racial equity, calling it one of his top priorities.

The administration backs a Senate Bill that would expand Justice Department reviews of anti-Asian crimes. Senators on Wednesday moved to let an up-or-down vote be held on the bill. 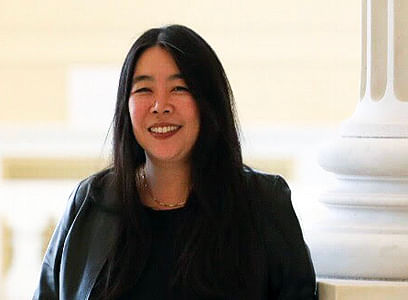 A recent report by the Centre for the Study of Hate and Extremism at California State University, San Bernardino, showed that crimes against Asian Americans and Pacific Islanders jumped by 145 per cent in 2020.

Asian-American voters turned out in record numbers in presidential battleground states in the 2020 election, helping tip states such as Georgia to Mr Biden.