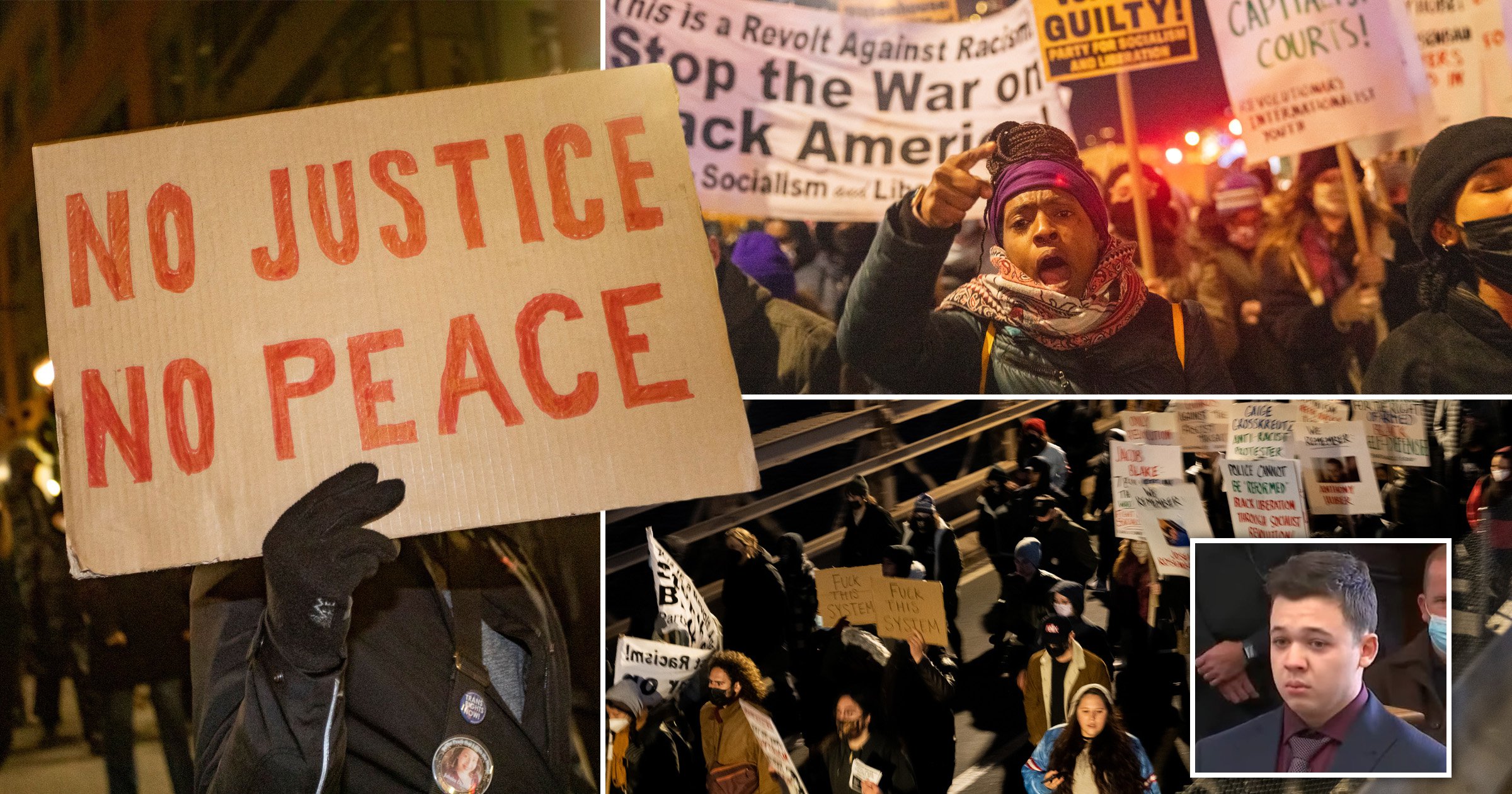 Protests broke out all over the US after Kyle Rittenhouse was acquitted of killing two men and wounding another at a Black Lives Matter demonstration.

Kyle Rittenhouse, 18, was cleared of five charges, including the life-carrying sentence of intentional homicide, on Friday. The US has been incredibly divided over the case and the final verdict has left the country in unrest.

The defence argued the teenager had to shoot Anthony Huber and Joseph Rosenbaum, who were killed, along with Gaige Grosskreutz, who was wounded, on August 25 last year to save his own life.

Jurors watched videos of each shooting to determine who threatened who first, eventually deciding in favour of Rittenhouse.

But some still agree with prosecutors who questioned why Rittenhouse had crossed state lines with AR-15 semi-automatic rifle to ‘defend property and people’ he did not know.

Many of these people gathered in cities across the US, holding signs saying ‘Welcome to AmeriKKKa’.

A protestor told a crowd in New York: ‘By allowing Kyle Rittenhouse to walk away, this entire country – this government – has slapped us all in the face for the millionth time.

‘We cannot allow them to continue treating us like we do not exist because they hurt us.’

The two men Rittenhouse killed and the man he wounded were all white, but the case has been linked from the start to issues of race and the criminal justice system.

Activists have previously pointed to differences in how police handled Mr Rittenhouse’s case and that of Jacob Blake, the black man who was shot by a white Kenosha police officer several times in the back as he entered a car where his three children were seated.

Video footage played during the trial showed Mr Rittenhouse running towards police still wearing his rifle, and continuing past the police line at officers’ direction.

‘You can really smell and see the underlying systemic racism that’s in the judicial system and the policing system,’ said Justin Blake, Jacob Blake’s uncle, following the verdict.

Businesses in California were seen boarding up their windows and police officers were setting up barricades before protests kicked off.

A demonstration in Oregon – where around 200 people smashed windows and threw objects at the police – was classed as a riot by US authorities and media.

The majority of protests reportedly stayed peaceful around the rest of the country while some gatherings saw counter-protests of sorts, where people dressed up in Stars and Stripes and carried signs saying: ‘Rittenhouse Rules!’.

President Joe Biden seemed to take sides, saying the verdict ‘will leave many Americans feeling angry and concerned, myself included’.

But he went on to encourage people to ‘express their views peacefully, consistent with the rule of law’.

‘Violence and destruction of property have no place in our democracy,’ he added.

However, he said the country should stick by the jury’s decision, finishing the statement with: ‘I believe that what unites us is far greater than what divides us.

‘I know that we’re not going to heal our country’s wounds overnight, but I remain steadfast in my commitment to do everything in my power to ensure that every American is treated equally, with fairness and dignity, under the law.’