Members of the Proud Boys, a far-right group that has been involved in violent incidents, have celebrated after Donald Trump mentioned them during the first presidential debate.

Asked if he would condemn white supremacists by the debate moderator, Chris Wallace of Fox News, Mr Trump instead accused the anti-fascist movement, Antifa, of being behind recent violence in US cities.

“I’m willing to do anything. I want to see peace,” Mr Trump said, adding: “What do you want to call them? Give me a name.” 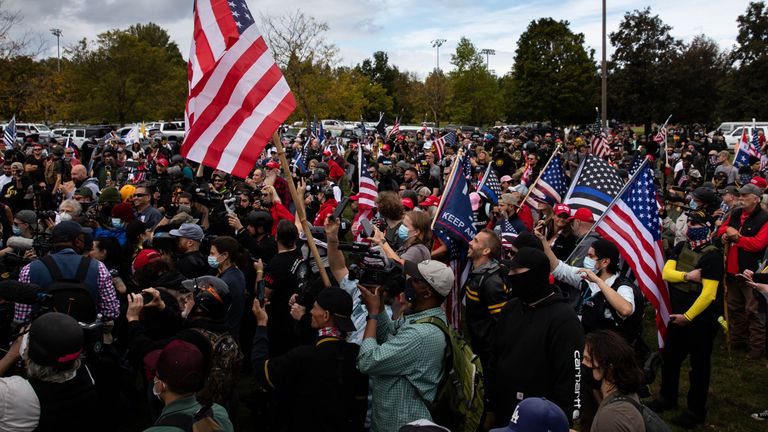 Pressed by Mr Wallace to “do it, sir”, the president responded that the Proud Boys should “stand back and stand by. But I’ll tell you what, somebody’s got to do something about Antifa.”

Some of the extremist group saw the exchange as tacit approval.

A channel on social media platform, Telegram, with more than 5,000 of the group’s members, posted “Stand Back” and “Stand By” above and below the group’s logo.

In another message, a member commented that the group was already seeing a spike in “new recruits”.

Mr Biden retweeted posts by people who identify with the group, noting that they appeared to be celebrating Mr Trump’s comments and saying: “This. This is Donald Trump’s America.” “The president of the United States, in the year of our lord 2020, refuses to condemn white supremacists,” she said.

The Proud Boys, founded in 2016 by Gavin McInnes, a co-founder of Vice Media, describes itself as “Western chauvinists who refuse to apologise for creating the modern world” but has been categorised as an “extremist group with ties to white nationalism” by the FBI.

The group has openly endorsed violence, according to The New York Times, and has been tied to violent incidents at recent protests.

Thousands of its members have reportedly descended on Portland, where violent clashes between police and social justice protesters, have taken place since the killing of George Floyd in police custody in May. The Proud Boys have links to Tommy Robinson, the leader of the far-right English Defence League and it appears it has chapters around the world, including in the UK, Australia, Canada and Japan.

Its members often wear black Fred Perry polo shirts with yellow trim, prompting the clothing label to end its exports to the US, for fear of being associated with the group.