[What you need to know to start your day: Get New York Today in your inbox.]

Mayor Bill de Blasio has called electric bicycles “a real danger,” and “a serious part of the problem” when it comes to the safety of city streets. He celebrated a police crackdown last year in which hundreds were confiscated.

Now a package of four City Council bills, set to be introduced Wednesday, would legalize most forms of the so-called e-bikes, the scourge of many New York residents and also a staple of the food-delivery workers who serve them.

The legislation, which also would legalize electric scooters, would not only allow electric bicycles that give extra support to a pedaling rider, but also those that could be operated without pedaling, by engaging a motorcycle-like handlebar throttle.

[Need a primer on e-bikes? We’re here to help.]

The legislation, a draft of which was obtained by The New York Times, is likely to set off a public confrontation with Mr. de Blasio, whose administration has insisted that state law bans electric bicycles that operate with a throttle — the primary sort of e-bike used by delivery cyclists, many of whom are recent immigrants.

“We love our city but let’s be clear, crossing the street in New York City should not be a harrowing experience,” Mr. de Blasio said last fall as he announced stepped-up enforcement by the Police Department against e-bikes. His stance angered some immigrant advocates.

In April, the city’s Department of Transportation tried to find a middle ground, allowing for the pedal-assist bicycles but retaining a ban on bicycles that do not have to be pedaled. Mr. de Blasio has said state law prohibits e-bicycles that operate without being pedaled.

That is where the e-scooters come into play.

Lobbyists for the e-scooter sharing service Bird have been pressing the City Council to grant the company permission to operate in New York City, as it does in cities including San Diego and Washington.

Bird had lawyers study the relevant law, and the company believes that e-scooters could be allowed in New York City under a section of state law that permits the city to regulate certain kinds of limited-use vehicles. The section of law also applies to e-bikes, advocates believe. 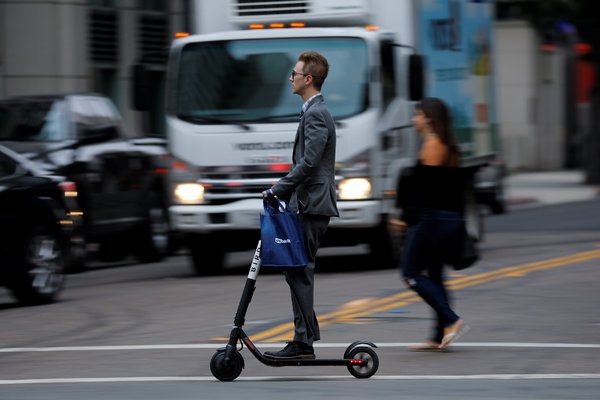 With that in mind, the City Council is prepared to introduce one bill to legalize e-scooters and a second to legalize two forms of e-bikes. Another bill would allow for a pilot to test the viability of e-scooter sharing in a limited area of the city — along the corridor that will be most hard hit by the shut down of the L train next year.

Riders would use Bird’s app to locate available e-scooters and pay a per-minute fee to ride them. The system is dockless, so riders would leave them wherever their trip ends.

But the e-bike section of the legislation is the most complicated. The law provides for “a bicycle equipped with fully operable pedals and an electric motor” that “may be used to propel such bicycle without the operator pedaling.” The maximum speed for such bicycles, as it is with pedal-assist bicycles, would be 20 miles per hour. (E-scooters would be limited to 15 m.p.h.)

The main sponsor of the bills, Councilman Rafael L. Espinal Jr., has been a supporter of e-bikes for years, and said the push to allow e-scooters presented an opportunity.

“I believe if we’re going to have a conversation around allowing e-scooters, we can’t move forward without addressing the e-bikes,” Mr. Espinal said. “What we’re trying to do is classify the e-bikes and scooters as devices instead of vehicles.” He said he believed City Council could do so under the law.

“The mayor’s position has always been that e-bikes are a nuisance, a problem, within the five boroughs,” he said. “I think we found a path forward.”

Corey Johnson, the speaker of the Council, did not immediately respond to a request for comment. Seth Stein, a spokesman for Mr. de Blasio, said that “while e-scooters are illegal under state and city law, the mayor is committed to innovation as part of his all-of-the-above transportation strategy to get New Yorkers moving again. We look forward to reviewing the proposals.”

Council members have been sensitive to the politics of allowing e-scooters, which may be seen as catering to younger and wealthier residents jetting around town, while banning e-bikes of the sort mostly used for work by poorer New Yorkers. One of the bills would create a program that would provide funds to poor workers who may need to adjust their e-bikes to make them legal under the new laws.

The scooter company, Bird, too is aware of that perception, and presents itself as agnostic on the subject of e-bikes. The company has also stressed the usefulness of its scooters for city residents outside Manhattan in areas not well served by the subway.

“We are excited about these bills,” Paul Steely White, director of safety policy and advocacy at Bird, said. Mr. White thanked the Council for “leadership on increasing mobility options and expanding transportation access for New Yorkers across the five boroughs.”