MONTREAL — The Quebec government passed a bill late Sunday barring schoolteachers, police officers, judges and other public employees from wearing religious symbols in the workplace, prompting an outcry that civil liberties in the province were under attack.

François Legault, the right-leaning Quebec premier, had called the bill a necessary measure to ensure the separation between religion and state in an abidingly secular province. It applies to Muslim head scarves, Jewish skullcaps, Sikh turbans and Catholic crosses, among other symbols.

Mr. Legault had also argued that the bill, which passed by 73 to 35, was supported by a majority of Quebecers.

Members of the opposition called Sunday a dark day for the province. Critics say that the legislation will effectively exclude religious Muslims, Sikhs and Jews from positions of authority in education and law enforcement, and that it runs roughshod over the freedom of religion and expression at the heart of Canada’s model of multiculturalism.

They also argue that it threatens to foment Islamophobia, anti-Semitism and fear of other minorities. Public officials, including several mayors and school boards in Montreal, have vowed to ignore the law, setting up a potential clash with the police and other authorities charged with enforcing it.

At the last minute, the government added an amendment that would allow inspectors to verify that the law was being obeyed, prompting the opposition Liberals to rail against the creation of a “secularism police force.” A government spokesman called such a characterization “ridiculous,” saying the government was merely ensuring that the bill had powers of verification. Public employees who flout the law could also face disciplinary measures.

As part of an overhaul of immigration policies, the government also passed a bill over the weekend that would scrap about 16,000 immigration applications. The legislation would affect about 50,000 people and force some immigrants who have been waiting in limbo for years to apply again.

The Quebec government has been seeking to tighten immigration, and has also raised the idea of testing immigrants to ensure they espouse Quebec’s values as a prerequisite for gaining permanent residency in the province.

In April, thousands of people took to the streets in Montreal to protest the religious symbols bill. One clutched a sign that read, “It’s what’s in my head, not on my head, that matters.”

“This government is introducing a law that tramples on the rights of thousands of people,” said Catherine McKenzie, the lead lawyer for a group seeking to overturn the legislation. “This bill is based on the same forces of populism we are seeing in the United States and Europe: the fear of the other.”

She said the National Council of Canadian Muslims, the Canadian Civil Liberties Association, and a woman who wears a head scarf and is affected by the ban planned to mount a legal challenge in Quebec Superior Court in Montreal. 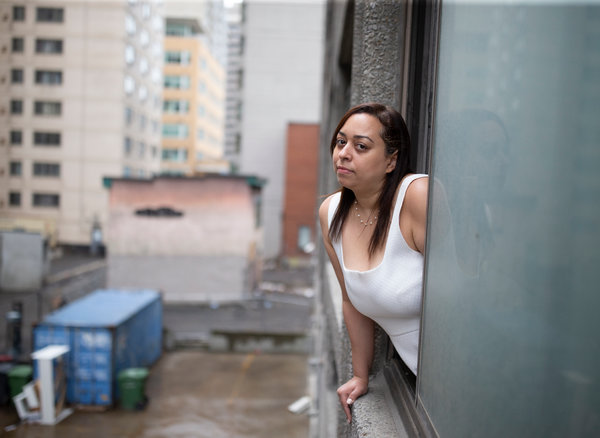 The case, Ms. McKenzie said, would be predicated on the legal argument that, under the Canadian constitution, the Quebec government does not have the legal right to legislate the relationship between religion and the state.

But challenging the bill in the courts could prove difficult because to insulate it from potential court action, the government invoked a rarely used constitutional loophole known as the “notwithstanding clause,” which empowers Canadian legislatures to override some constitutional rights like freedom of religion or expression.

The clause was added to Canada’s 1982 constitution to appease some provinces, which were resistant to including a charter of rights as part of the document.

Proponents of the bill argue that it will protect Quebec from encroaching orthodoxy that threatens to undermine the province’s liberal values, including respect for women and homosexuals.

Amani Ben Ammar, 34, an accountant who emigrated from Tunisia to Montreal six years ago and comes from a Muslim family, said she supported the bill because it was imperative that those representing the state in positions of authority appeared to be neutral.

“How can a judge wearing a Muslim head scarf be deemed neutral in a case involving a homosexual?” she asked, referring to Islamic views condemning homosexuality. “Diversity is important in society, but the state needs to avoid conflicts between professional duties and religion.”

“I left my country because of the pressure of Islamization and do not expect to find that in Quebec,” she added.

Issues of immigration and identity run deep in Quebec, a majority French-speaking province surrounded by English-speaking North America. The case of religious orthodoxy is especially sensitive. In the 1960s, Quebec experienced a social and cultural revolt known as the Quiet Revolution, during which Quebecers rebelled against the influence of the Roman Catholic Church in the province — including pressuring women to have children.

After criticism from opposition politicians that the bill failed to adequately define what constitutes a religious symbol, the government amended the measure to clarify that a symbol constituted “any clothing, symbol, jewelry, ornament, accessory or headgear that is worn in connection with a religious conviction or belief.”

The legislation does not apply to those already working in the public sector as long as they stay in the same position. However, under the bill, a Muslim teacher wearing a head scarf could not be promoted to a higher position like school principal if she refused to remove her head scarf.

Lawyers who wear head scarves, crosses, skullcaps or turbans will also no longer be able to work as external counsel for the government, or to represent it before the courts or with a third party.