MIAMI — For Lucas Melton and his team of field organizers, their all-out campaign to register former felons to vote in Florida before the Monday deadline begins with informing them that they are eligible in the first place.

“They still don’t know,” Mr. Melton said on Friday outside a church in the Liberty City neighborhood of Miami, where the organizers had fanned out to knock on doors. “It’s like a fact-finding mission.”

Two years after Floridians voted overwhelmingly for Amendment 4, a landmark ballot measure that restored the franchise for up to 1.4 million people with serious felony convictions, many former felons who could register as voters have not even tried, in part because of perceptions that the hurdles are still too great, according to many of the organizers. They were rushing over the weekend to help the new pool of potential voters make the registration cutoff for casting ballots in the November election.

Over the past month, Mr. Melton’s team from the Florida Rights Restoration Coalition has raced to canvass neighborhoods across the state with high populations of former felons, asking people at homes, flea markets and strip malls if they or someone they know has a criminal record and wants to learn more about their eligibility.

“Most of the people walking down the streets are like, ‘No, man, I can’t vote — I don’t have my rights back,’” said David Lester, 26, one of the organizers, who stood in a huddle with Mr. Melton and a half-dozen others to talk about their work.

“It’s like they’re stuck in a mind frame of what they were told in prison,” added Camille Sharpe, 36, another organizer.

With the knotty complications that have followed the passage of Amendment 4, it has been hard to keep up with who is eligible and who is not. 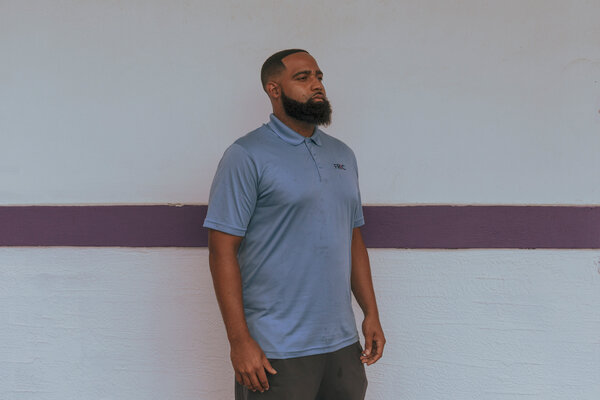 Amendment 4 became entangled in partisan politics almost immediately after it was approved. Republican state lawmakers, apparently fearing that former felons might register en masse to the benefit of Democrats in a presidential battleground state, undermined the measure’s impact by passing a law requiring that former felons repay any outstanding court fines and fees before getting back their rights. (Amendment 4 excluded ex-felons convicted of murder or sexual offenses.)

A conservative-leaning federal appeals court upheld the state’s repayment requirement last month, all but ensuring that the vast majority of “returning citizens,” as many prefer to be called, would be shut out of the ballot box this year. At least three-quarters of the roughly one million former felons in Florida owe court debts, by one estimate. Most former felons are too poor to pay them. They are also disproportionately Black.

Since the appeals court decision, donations have poured into the Florida Rights Restoration Coalition’s fund to help former felons pay off their court debts, with some $16 million raised by Michael R. Bloomberg, the former New York City mayor. Other big names, including the musician John Legend, the basketball stars LeBron James and Michael Jordan, the director Steven Spielberg and the singer Ariana Grande, have also made contributions, according to the coalition, bringing the fund-raising total to more than $20 million.

Ashley Moody, the Florida attorney general, who is a Republican, has urged law enforcement to investigate whether the donations amount to an unlawful inducement for a vote, though former felons who receive the money are not obligated to register to vote or to support a specific candidate.

Coalition leaders said they were focusing on encouraging people to register and cast a ballot, without talking about whom they should vote for. Still, some of those canvassing said that the thousands of potential voters would provide an important new voice for the interests of lower-income families and people of color in Florida, on issues like access to jobs and housing for former felons, and bail reform.

Turning the flood of recent support into names on the rolls is not a quick process. Former felons must first find out whether they owe any court debts, and if so, how much — sometimes in more than one county. The state has no uniform system that records court debt. And even when someone knows exactly what they owe, in order to pay it off, they may have to figure out which private collection agency has been assigned their debt.

“I had to do a little digging and detective work,” said Jeff Gruver, who paid off $801 in fines and fees last month after he was featured in a New York Times article and readers sent him donations. “I am overwhelmed,” he said of the response.

Mr. Gruver found the right collection agency on his second try. He then spent about half an hour navigating the agency’s online payment system. In all, cobbling together the money, finding the agency and completing the payment took him about a week, he said.

“It’s bittersweet, because mine was a fairly simple resolution, and there are so many others that are stuck,” said Mr. Gruver, 34, who lives in Gainesville and runs a homeless shelter there.

While raising money to help former felons is hugely significant for people like Mr. Gruver, it is hardly a large-scale solution. The Florida Rights Restoration Coalition estimates that each person helped by its fund receives about $1,000 in assistance, which means the $25 million the coalition hopes to raise could help about 25,000 former felons.

“It’s kind of incomprehensible to think that we have to rely on the generosity of billionaires to have voting rights,” said Daniel A. Smith, a professor of political science at the University of Florida who has studied the issue of former felons’ outstanding court debts. “This is perpetuating the inequitable system of justice in Florida that rests on the backs of people who cannot afford to pay.”

On Friday, coalition leaders rode a big Amendment 4 bus to the Miami-Dade County criminal courthouse, which was largely quiet because the coronavirus has dramatically slowed down its work. They showed off a large novelty check for $7 million, the amount the organization plans to set aside for the roughly 8,000 former felons in Miami-Dade who have come forward — either to the court or the coalition — to try to pay back their debt or modify it.

The state law passed last year to require the repayment of court debt before voting rights are restored also allowed ex-felons to petition judges to waive the outstanding financial obligations or convert them to community service requirements.

“What you’re seeing are people working around a broken system to help other people,” said Neil G. Volz, the coalition’s deputy director.

Both he and the coalition’s executive director, Desmond Meade, who are former felons, went before Florida’s executive clemency board last month to seek pardons, so they could get their full rights restored and not just their right to vote. Pardons would allow them to serve on a jury, own a firearm and, in Mr. Meade’s case, join the Florida Bar. The board granted Mr. Volz’s request but not Mr. Meade’s, though he can try again. Both can already vote.

The registration deadline for the November general election expires at midnight on Monday, but the organization plans to continue sending canvassers out after that to sign up former felons for reimbursement from the fines and fees fund — and to encourage those who have already registered to cast their ballots.

“That could make a real change,” said Ms. Sharpe, the organizer.

With President Trump in the hospital for the third day, Joe Biden campaigns cautiously while the Trump campaign continues its usual message. Read the latest updates.