The coronavirus has made a routine trip to the gym feel like a health threat.

Many epidemiologists consider gyms to be among the highest-risk environments, and they were some of the last businesses to reopen in New York City in early September.

Now gyms must comply with a long list of regulations. Checking in requires a health screening; masks are mandatory, even during the most strenuous workouts; only one-third of normal occupancy is allowed; and everyone must clean, then clean some more.

At a Planet Fitness in Brooklyn, Dinara Izmagambetova, who wore a floral black face mask and had a sheen of sweat after completing a two-hour workout, said she was thrilled to be back in a gym. But safety measures had made it a less sociable experience, she said.

“I could ask someone” how to use a machine before the outbreak, Ms. Izmagambetova said. “Now I’m doing a lot of Googling.”

Despite all the safety guidelines, some fitness enthusiasts are reluctant to go back and many have adapted to virtual workouts and exercising outdoors. Sales of fitness equipment like kettlebells and Peloton bikes have skyrocketed as people brought their workouts home.

Christopher Carbone plans to cancel his membership at a Planet Fitness branch near his home on Staten Island because of concerns about people who touch “the same equipment many times and excess sweat and breathing in range of others.”

Instead of going to the gym, Mr. Carbone will keep working out at home with a small set of hand weights.

In normal times, gyms often served as places of solace, where fitness buffs and casual exercisers could sweat out the stresses of the day.

Many former patrons are eager to return to their routines, and gym owners desperately need their business.

But even as gyms have reopened, their future remains unclear. Some of them have had to shut down again after Gov. Andrew M. Cuomo recently designated parts of Brooklyn and Queens coronavirus hot spots.

A Retro Fitness location in Rego Park, Queens, formerly in one of Mr. Cuomo’s “red zones,” expressed regret about closing on its Facebook page.

“We have done our best to stay open as long as possible to serve you,” the post said, adding, “We support the city/county’s decision as being in the best interest of our members, staff, and community to help curb the spread of Coronavirus.”

The gym was recently allowed to reopen as some restrictions were eased.

Despite scientists’ concerns, infection clusters connected to gyms in the United States have been relatively rare so far, though they have been reported in Hawaii and California.

“We’re not seeing outbreaks tied to gyms as heavily as something like a bar or school,” said Saskia Popescu, an epidemiologist from George Mason University.

Still, a number of the 2,000 or so gyms in New York State and fitness centers across the country face a fight for life. At least one-fourth of the more than 40,000 gyms in the United States could close by the end of the year, according to the International Health, Racquet and Sportsclub Association, an industry group. A study by Yelp said that more than 2,600 already had.

Many of those that have closed are smaller, independently owned businesses that have fewer resources than large national chains like Planet Fitness, L.A. Fitness and Equinox.

Marco Guanilo, who owns Momentum Fitness on the Upper West Side of Manhattan, said he had struggled during the long months he was closed, but that about 50 percent of his business had returned since he reopened. 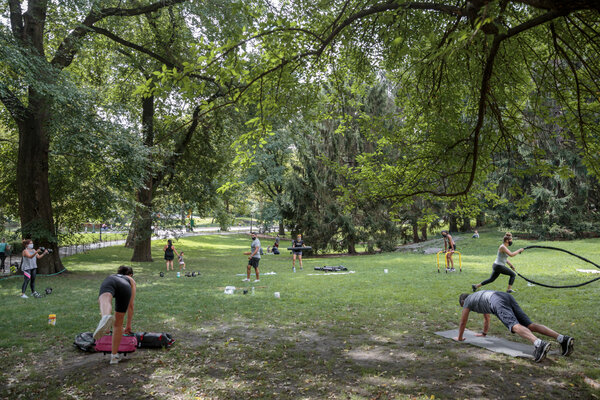 Still, he was $300,000 in debt, much of it from back rent payments he could not pay. Mr. Guanilo said that he thought his business would endure as long as he could stay open. The recent state-imposed closures have made him anxious.

“I’m scared of another shutdown,” Mr. Guanilo said, “because that will put us under.”

While major chains may have deeper pockets, many are also in dire straits. Gold’s Gym, 24 Hour Fitness and Town Sports International — the parent company of New York Sports Clubs — have all filed for bankruptcy.

Planet Fitness, which has more than 2,000 locations around the world and 40 in New York City, has also faced serious challenges. Its revenue was down nearly 80 percent from the same period last year, according to the company’s second quarter earnings report

Despite the bleak numbers, Chris Rondeau, Planet Fitness’s chief executive, said the company has managed to weather the pandemic.

“Cancels are a little bit higher, for sure,” Mr. Rondeau said, but, he added, “people are joining at the same clip they were this time last year.”

Planet Fitness furloughed most of its employees during the pandemic, but about 85 percent of them have returned to work and no locations closed, Mr. Rondeau said.

Across the country, states have imposed different regulations to reopen gyms safely. Most require occupancy limitations and at least six feet of social distancing, though some states mandate as much as 14 feet. Requirements for face coverings vary.

Regulations differ even in the states neighboring New York: New Jersey only allows gyms to operate at 25 percent capacity, while Connecticut permits twice that.

Before gyms in New York can reopen they must undergo an inspection over video with an official from the city’s Health Department, showing that they have posted safety plans, have spaced machines apart and are using an up-to-code air filtration system.

Fulfilling the requirements and stockpiling cleaning supplies and personal protective equipment can cost more than $10,000, a significant burden after months of inactivity.

As of the beginning of October, the city had inspected more than 1,000 gyms, and only 11 had failed. Failing gyms can reopen once they fix the issues they were cited for. In-person inspections might begin in the near future, officials said.

Dr. Popescu said she believed that “the virtual approach” to inspections “is frankly better than nothing, which is what many have done.”

Whatever the risk factor, gyms are certainly different these days.

On a recent weekend at a large Planet Fitness branch in Brooklyn, a masked greeter asked clients whether they had coronavirus symptoms, then collected their contact information.

Television screens flashed reminders to disinfect workout stations, and every other treadmill and elliptical machine was blocked out with yellow-and-purple signs that said, “We’re practicing social fitnessing. This machine is not available for use.” Even so, there were few people working out.

One of them was Dana Fagan, a bookkeeper, 41, who said she was pleased by the precautions being taken.

“I’m cleaning more — the whole thing is wet and I’m fine with that,” she said about disinfecting the equipment. “You can never have enough.”

Mr. Guanilo’s boutique gym normally offers group classes, physical therapy and individual sessions with trainers. The more controlled atmosphere at his gym, where patrons have individual sessions if they’re not in a group class, appeals to people who are concerned about infection, like Joshua Rubin, a 38-year-old director at an accounting firm.

“There’s not people wandering around using different machines,” Mr. Rubin said. “There’s only two to three of us at a time.”

Nearby, Jesse Damon, 46, stretched his arms while a trainer verbally guided him, keeping several feet away.

“They’re very safe here, this is a private gym,” he said, adding that he went to a gym in Wyoming during a visit in June and “it was a lot of 20-year-olds not wearing masks.’’

Fitness classes normally make up nearly half of Mr. Guanilo’s income, but the city still does not allow them indoors because officials say they are too risky.

While he was shut, Mr. Guanilo was able to recover some of his lost business through virtual sessions and group fitness classes in Central Park, which involved hauling hundreds of pounds of equipment on a hand truck.

Mr. Guanilo’s clients want him to succeed, but some are not comfortable returning. Richard Stanger, a 70-year-old business consultant, said he would not go back to Momentum Fitness until there was a reliable treatment for the virus.

“We all want life to return to normal, and normal to me would be working out with Marco,” Mr. Stanger said. “And I’m hoping we get there, but I’m not optimistic that we can get there before the first of the year.”