Weather: Rain, and then later in the day a mix of rain and snow before clearing tonight. 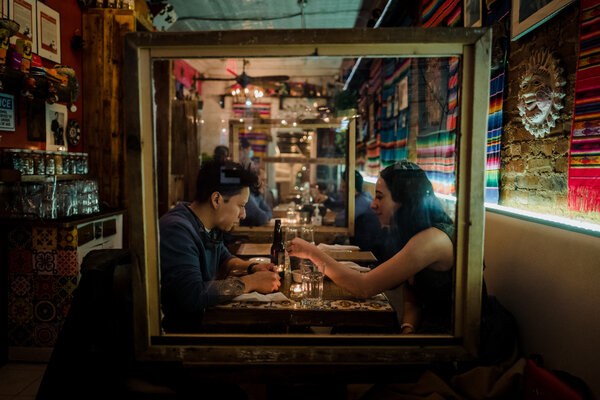 Even as restaurants in New York City have faced a monumental crisis for months, many had seen steady progress since the worst of the pandemic. Some expanded their takeout operation. Outdoor dining started in July. And at the end of September, restaurants were allowed to serve patrons indoors at a reduced capacity.

Then came the second wave.

On Friday, Gov. Andrew M. Cuomo announced a ban on indoor dining in the city starting today as the city and state see a surge in coronavirus cases. As cold weather threatens to make outdoor dining less appealing to customers, many restaurants now wonder how they will survive.

[Restaurants across the city are moving to lay off waiters, servers and bartenders.]

Restaurants have had a tumultuous year. On March 16 they were closed for all but takeout and delivery. Outdoor dining began in summer. Indoor dining, at 25 percent capacity, started at the end of September.

Even those rules changed as the state’s strategy to fight the coronavirus shifted. New restrictions were applied to certain virus hot spots.

Thousands of restaurants have not been able to survive the upheaval, and several thousand more report they are likely to go out of business.

How are restaurants reacting?

For many, the future is uncertain.

Michele Gaton, 50, the owner of Extra Virgin in the West Village, said that she and her head chef told 34 workers that they would no longer have scheduled shifts after the weekend. She had warned employees that she would have to cut back if indoor dining ended.

Kenya Britain, the manager of Row House in Harlem, said he hoped to leverage a partnership with a bar that had invested in heaters in a large outdoor space.

Jonathan Forgash, executive director of Queens Together, a restaurant group, said restaurants are “throwing ideas against the wall and seeing what is sticking or working.” Some are reducing offerings on their menus to limit the cost of food supplies and labor, and still others are repurposing their dining areas into markets.

But the outlook is grim. A survey of 6,000 restaurant operators by the New York State Restaurant Association found that more than half said it was unlikely their businesses would still be in operation in six months without any government aid. The survey found that 78 percent expected more layoffs over the next three months.

New York Has a Cameo in ‘The Crown.’ Here’s What Really Happened.

Owners of small restaurants, shops, grooming businesses and more say they were shortchanged by the Paycheck Protection Program. [The City]

And finally: The return of Brooklyn Magazine

Brooklyn Magazine, a glossy quarterly, disappeared two years ago, and clearly much has changed in the borough since then.

But amid the pandemic, as pay cuts, furloughs and layoffs hit media organizations across the country, the magazine has been revived under new management and editorial leadership. Brian Braiker and Michael Bassik, who haven’t seen each other in person in over a year, acquired the magazine from its previous owners in the summer. Its website relaunched last week.

“Throughout the pandemic, I have found the need for local journalism and local storytelling to be more important than ever to understand how our communities are changing and adapting,” said Mr. Bassik, who left the advertising holding company MDC Partners to be the magazine’s publisher.

“Not only does Brooklyn deserve a magazine,” he added, “it deserves one now.”

Mr. Braiker, the editor in chief, said the publication’s goal was to focus on culture and small businesses and cover neighborhoods that rarely receive media attention.

“We want to really shine a light on a borough that’s sort of down but not out,” he said.

The magazine is digital only for now and is publishing a newsletter and features a podcast. Mr. Braiker said a print edition might come to fruition next year.

Metropolitan Diary: Back of a bike

When I moved out of my parents’ house in Queens and into my own apartment in Manhattan, I was living my dream.

One day about a month after I made the move, my boyfriend handed me a helmet and asked me to join him for a ride on his new motorcycle. This was a new kind of freedom, and I was an eager passenger.

We went east on 16th Street before turning and heading north on Third Avenue. As we sped up uptown, we stopped at lights in Gramercy Park, Kips Bay and Murray Hill. At each stop, I would sit up very straight and scan the sidewalks. I was hoping a friend would see me.

When we stopped at a light at 59th Street, I looked to my right and noticed a familiar car idling next to us.

Suddenly I was gazing into the eyes of my father, and I wished I could disappear.