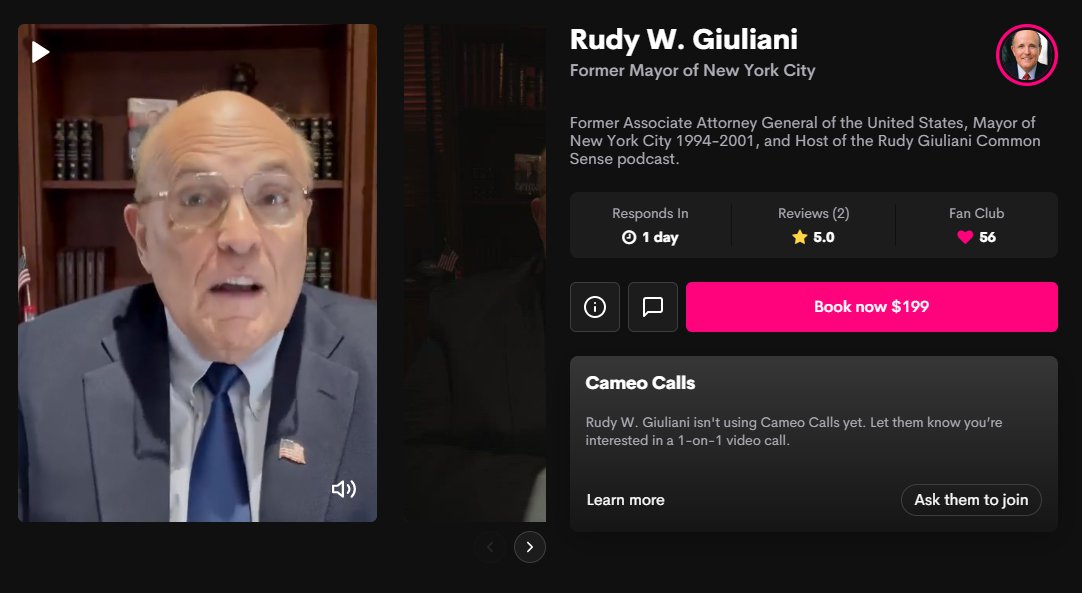 Rudy Giuliani, the former longtime lawyer of ex-President Donald Trump, has joined Cameo, an online service that sells customized videos from celebrities. Giuliani is offering his personalized videos for $199 a pop – a way to possibly make money as he faces a multi-billion defamation lawsuit.

Giuliani posted a video on Cameo introducing himself on the platform on Tuesday.

‘If there is an issue you want to discuss or a story you’d like to hear or share with me or a greeting that I can bring to someone that would bring happiness to their day, I would be delighted to do it. It can be arranged. We can talk through the magic of Cameo.’

His Cameo profile states that he is ‘Former Associate Attorney General of the United States, Mayor of New York City 1994-2001, and Host of the Rudy Giuliani Common Sense podcast’.

Cameo could potentially be a way for Giuliani to shore up funds as he deals with a $1.3billion defamation lawsuit from Dominion Voting Systems. The voting equipment company alleges that Giuliani ‘manufactured and disseminated’ a conspiracy theory about its machines. Giuliani is accused of pushing baseless claims of fraud in the 2020 presidential election in states where Joe Biden beat Trump.

Giuliani is also the subject of a federal investigation into whether he illegally lobbied the Trump administration on behalf of Ukrainian officials that he asked to find dirt on Biden. FBI agents raided his Upper East Side apartment in April and seized multiple electronic devices as part of the probe.

However, ‘Trump aides have been clear they see no mechanism for paying Giuliani’s legal bills that isn’t problematic for Trump’, Haberman reported.