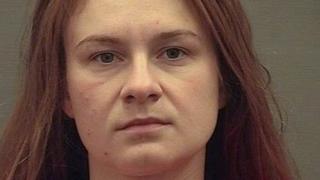 A Russian woman accused in the US of acting as an agent for the Kremlin to infiltrate political groups has pleaded guilty in a deal with prosecutors.

She allegedly tried to infiltrate the National Rifle Association (NRA) in an effort to influence US policies in favour of Moscow.

Butina initially pleaded not guilty. She has been in custody since July.

She has also agreed to co-operate with investigators. Prosecutors expect the deal will give them information about Russia’s efforts to interfere in US politics.

Her lawyer, Robert Driscoll, estimates that she could face up to six months in prison, Reuters news agency reports.

She is being held at an adult detention centre in Virginia, and a sentencing hearing has been set for 12 February.

The case has no connection with the Mueller inquiry into allegations of Russian meddling in the 2016 presidential election in an attempt to secure victory for Donald Trump.

Who is Maria Butina?

Born in the southern Siberian city of Barnaul in 1988, according to her Facebook page, she has enjoyed using weapons ever since she was a child, picking up a gun for the first time at the age of 10.

In 2011, she set up the Right to Bear Arms group and called for the sale of short-barrelled firearms to civilians to be made legal.

Butina began travelling to the US for NRA conventions. In 2015 she attended a Trump campaign event in Las Vegas, asking the presidential candidate about his views on US sanctions against Russia.

By 2016 she had a student visa to study for a master’s degree at American University in Washington DC.

A piece of a larger puzzle

Analysis by Anthony Zurcher in Washington

In some ways, Maria Butina was like any other young, ambitious, aspiring political player in Washington DC trying to network their way to power and status. The difference, of course, is that she was a Russian national in communication with, and taking actions to advance the interest of, influential Russian officials.

To do so without registering with the US government is a federal crime – and now she faces a prison sentence and deportation.

The details outlined in the plea agreement are not exactly the stuff of spy novels. She arranged a Russian delegation to a prestigious Washington prayer event, hobnobbed at the National Rifle Association convention and organised a visit by US gun rights advocates to Moscow. Taken in isolation, these “informal channels of communication” with American conservatives could have helped improve US-Russia relations but were hardly nefarious.

Viewed in the context of other Russian efforts to influence the 2016 presidential election presented by Robert Mueller’s investigation – including hacking Democratic Party communications, waging an illicit social media campaign, and funding and organising on-the ground political rallies and protests – and the Butina plea seems more like a small but potentially meaningful piece of a much larger puzzle.

What are the accusations against her?

Federal prosecutors said Butina was directed by a senior Russian official to infiltrate conservative political groups, including an unnamed pro-gun lobbying organisation presumed to be the NRA, which is close to Mr Trump’s Republican party.

In a statement read in court, one of the federal prosecutors said Butina had drafted, in March 2015, a document called “Diplomacy Project” that called for unofficial communication lines between high-ranking US officials and Russia.

She acknowledged that she worked with two Americans and a Russian official.

CNN identified the Russian citizen as Alexander Torshin, a former deputy governor of Russia’s central bank who was targeted with US sanctions.

One of the US citizens has been identified in US media as Paul Erickson, a South Dakota-based conservative political activist who was in a relationship with Butina. He is listed in public records as being 56 years old. His lawyer has not commented.

Last week, government lawyers dropped what the judge said was a “salacious” allegation that Butina had offered sex in exchange for a position in a special interest group.

Prosecutors told the court that they had been been “mistaken” when they read a text conversation between two friends.

Analysts say this and other errors by prosecutors may have given Butina more leverage in reaching a plea deal.

The Russian government has previously described the case as “fabricated”.

In an interview with CNN, foreign ministry spokeswoman Maria Zakharova said Butina had been “tortured” in detention – without providing any evidence – and that the Russian government considered her a “political prisoner”.