Amid substantial pushback, the head of the San Francisco Board of Education said this week that the board was pausing plans to purge the district of school names that it said were linked to racism, sexism or slavery until after it reopened schools for in-person learning.

Gabriela López, president for the board, said in a statement on Twitter on Sunday that reopening “will be our only focus until our children and young people are back in schools.” Board meetings about renaming schools are canceled “for the time being” and “we will not be taking valuable time from our board agenda to further discuss this, as we need to prioritize reopening,” she said.

“I want us to focus our time and actions where they matter most,” Ms. López added. “On the safety of our children, and on safely getting them back into schools.”

The board’s renaming effort had been criticized by some parents, students and elected officials for its targets as well as its timing. The board began this work in 2018 and had planned to rename schools by April. San Francisco public schools have been focused on distance learning for nearly a year amid the coronavirus pandemic. Local private schools and public schools in other cities have already started offering some in-person options.

In a 6-to-1 vote last month, the school board decided to rename 44 of its 121 schools because, it said, the schools had been named after historical figures who fit the following criteria: “engaged in the subjugation and enslavement of human beings; or who oppressed women, inhibiting societal progress; or whose actions led to genocide; or who otherwise significantly diminished the opportunities of those among us to the right to life, liberty, and the pursuit of happiness.”

Among the schools targeted for a name change were ones named for Abraham Lincoln, George Washington, Thomas Jefferson and Senator Dianne Feinstein.

Washington and Jefferson owned slaves. Lincoln was criticized for his response to the so-called Minnesota Uprising, in which more than 300 Native Americans were sentenced to death by a military court after being accused of attacking white settlers in 1862.

Ms. Feinstein was on the list because a Confederate flag that was vandalized in front of City Hall was replaced while she was mayor of San Francisco. 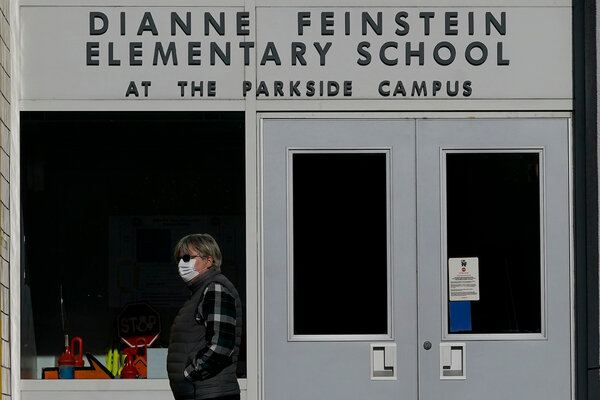 “I acknowledge and take responsibility that mistakes were made in the renaming process,” Ms. López said in her statement on Sunday.

Ms. López also said in the statement that the board would revamp its renaming process to make it “a more deliberative process” and include input from historians at local universities.

She did not specify when the renaming process would restart, but said in the statement that “this is the last time I’ll comment publicly on renaming until schools are reopened.”

The board’s vote in January to rename the 44 schools was criticized by some as inappropriate amid the coronavirus pandemic and the uncertainty over when students would be able to return to classrooms.

Earlier this month, the city took the dramatic step of suing its own school district to force it to reopen schools. City officials cited testimony from doctors and parents about the emotional toll distance learning was having on students.