Sean Arias, 7, casually dressed in sweats and sneakers, climbed atop the piano bench, sat down on an aging textbook — a makeshift booster seat — and rested his feet on a copy of The New Grove Dictionary of Jazz. His instructor, Santiago Lomelin, a doctoral student at Rutgers University, led him through a series of warm-ups before flipping open a book to a short Bach piece.

“Let’s learn a new song,” Mr. Lomelin said. Sean edged forward with finicky excitement, peering at the notes. He paused for a moment, processing — then leaned back in his seat and began to play, exploring the music with an impressive dexterity.

“This program — thank God,” whispered Sean’s mother, Vanessa Peña, who was seated behind him in the practice room. “It’s been a true blessing. I’ve seen my son blossom.” 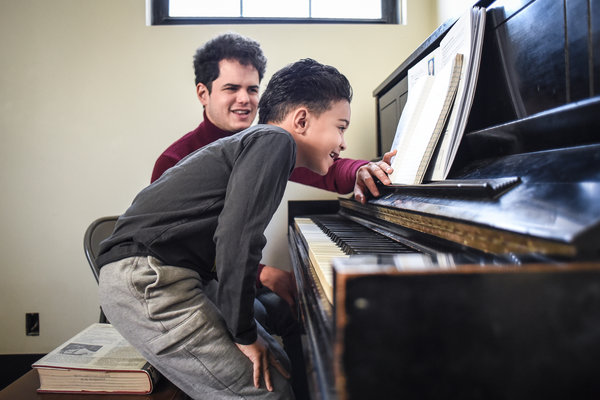 Step into the Bronx Community College’s Guggenheim Hall at 8:45 on Saturday morning and you’ll find the sleepy weekend routine of the average American university: empty hallways, unlit classrooms, the hiss of a radiator.

Fifteen minutes later, though, the place transforms — brimming with children (some as young as 4) and a handful of adults, each of them here for one-on-one classical instruction with some of New York’s most promising musicians. It’s a recurring scramble for classical music in a city perpetually starved for space.

Since 1991, the Bronx Conservatory of Music, a nonprofit arts organization, has provided low-cost education in classical music to a constituency that has been historically underexposed to the tradition. And at a time when music classes are being cut from public schools everywhere, it has become an unlikely success story: a weekly pop-up school that trains students, more than 80 percent of whom are black or Hispanic, in a musical tradition long characterized by a lack of racial diversity.

In the last four years, the school, led by a team of talented and ambitious young instructors, has seen its enrollment more than triple — there are around 170 students now, up from 50. But that success may ultimately jeopardize the school. The surge in students has led to increased anxiety about its relationship with Bronx Community College, which has allowed the school to operate out of its music department on Saturdays free of charge.

“We’re really at capacity now in this location,” said Douglas W. Meyer, the conservatory’s music director and treasurer. He described the program’s arrangement with the college for the last three decades as an essential part of its operating model. “We’re able to provide competitive compensation to our teachers and the lowest possible tuition rates to our students because we are the recipient of the largess of the college, for which we are eternally grateful,” he said.

“The good news is, we don’t have to maintain permanent facilities,” Mr. Meyer explained. “The flip side is that we’re here at the pleasure of the college.”

Changes to the arrangement, he said, could easily pose an existential threat; a rise in costs to offset rental payments, for example, could push the price of lessons beyond the reach of many students.

A lack of permanent facilities also means that students must find a place to practice during the week. Students studying violin, cello and guitar can borrow an instrument from the school. (Many were donated to the school by WQXR, the city’s classical music radio station, following one of its instrument drives.)

But for students of piano, far and away the most popular instrument at the school, finding a piano to use can be a challenge.

“The dream,” said Philip Kwoka, the school’s executive director, “is to raise enough money for a permanent space where kids can come all throughout the week to practice.” Since space is already limited, the school has had to add dozens of families every year to its wait-list. “Our goal is eventually to be in a position where we can give everyone who’s interested an opportunity to study here.”

It’s exactly the deal that draws in many of the families. The Bronx Conservatory charges $23 for a 30-minute lesson and $46 for an hour, and those prices include supplemental group-based instruction in rhythm and percussion. (Elsewhere in New York City, private music lessons can easily top $100 per hour.)

The teachers at the conservatory are mostly young graduates or postgraduates from schools in and around New York: Juilliard, Mannes, the Manhattan School of Music. Most balance teaching schedules with their own performance demands.

“This school makes classical musical accessible to us,” said Frayma Rodriguez, who attended Bronx Community College and whose son, Jeremy, 11, studies guitar at the conservatory. “It’s here in the community, and it’s not too expensive.”

Martha Forte, whose son, Antonio, 8, studies violin, travels from Yonkers each Saturday for his lessons. “The Yonkers public schools, they’ve slowly cut arts programs to bare bones,” she said. “It’s a 20-minute drive to get here, but it’s so much more affordable.” Ms. Forte is especially impressed with the commitment of the instructors, she said, adding that Antonio’s teacher, Katherine Dennis, will often FaceTime with the family during the week to help Antonio address various musical issues.

Despite its relatively small size, the Bronx Conservatory has had ripple effects in the broader community.

Janell Alvarez, 16, has attended the conservatory since she was 7, first as a student of piano and later of voice. When changes at her local church, St. Helena’s in Parkchester, left one of its Masses without an organist, Janell trained to fill in for the role. She now performs at the 5 p.m. service every Sunday.

The school has been similarly transformative for Joaquin Estrella, a 10-year-old piano student.

One of the school’s more advanced pianists, Joaquin won a full scholarship through the Bronx Conservatory last year to attend a summer camp at the Luzerne Music Center, an immersive musical program in New York’s Adirondack Mountains.

“That was a very special experience for me,” said Joaquin, who wants to be a professional musician. “It gave me a chance to fit in.”

His father, Jorge, stressed the importance of having found a suitable arts program that’s situated in the Bronx, where the family lives. “There’s a lot of cultural richness here, but the borough is really drained of resources,” Mr. Estrella said. “And if we want the Bronx to thrive, then we have to make a commitment to change, and to stay here, and to support programs like this.”

That support is sometimes hard to come by. Fund-raising is now one of the organization’s biggest focuses, according to Mr. Kwoka, who is eager to find a way to welcome all the students currently on the wait-list and to provide more scholarships.

But there are always smaller concerns, too: filing tax forms, registering students, rearranging teaching schedules to accommodate absences. And at the end of each Saturday, Mr. Kwoka has to pack away his computer, tidy the classrooms and box up the printer.

By then, Guggenheim Hall has transformed back into a college campus. There is little to suggest that dozens of kids have spent their Saturday here playing classical music — aside, perhaps, from a set of music stands that might seem curiously low to the college students who use them during the week.

Stephen Hiltner is a reporter and photographer for the Surfacing column. A graduate of the University of Oxford and the University of Virginia, he joined The Times as a staff editor in 2016 after editing for six years at The Paris Review. @sahiltner • Facebook