GOODWOOD, Ontario — Joe Toby was recently giving a young couple a tour of his workshop, when the man sprinkled rose petals on the concrete floor and got down on one knee.

The woman was a big Schitt’s Creek fan, it turned out, and was ecstatic to get engaged in the building, which doubled as a mechanic’s garage in the series, he said.

“And here I was thinking it’s just my workshop,” said Mr. Toby, a retired machine maker who uses the space to build specialty beds for disabled children. “I guess it is special.”

A satire about a fabulously wealthy family that loses all its money and is forced to settle in a town the patriarch bought as a joke because of its name, Schitt’s Creek has become a cult hit for its quirky humor, haute couture costume design and the fictional town’s unlikely embrace of gay love. It won a record nine awards at the Emmys, including one for best comedy.

Nowhere has its sudden popularity been felt more intensely than Goodwood, a sleepy commuter hamlet 28 miles north of Toronto that was the main location for filming over six seasons.

The hamlet feels like a postcard from antiquity, with heritage homes on less than a dozen streets and farmland on either side. The last census put its population at 663 — mostly retirees and young professionals with families who commute to the city for work. 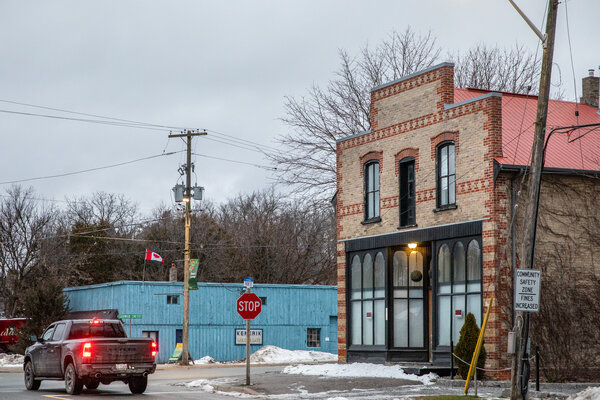 Before Schitt’s Creek, Goodwood’s claims to fame were decidedly more pedestrian — potatoes grown on nearby farms, and the surrounding gravel pits, which produce the raw material to build highways and downtown buildings.

Now, it has become a pilgrimage site of fans, who call themselves “Schittheads” and arrive in droves to the hamlet’s main intersection to take selfies in front of the buildings that served as the series’ set. Some arrive in character, dressed as Moira, the dramatic matriarch who has named her precious wigs like children, or Alexis, the socialite daughter. They spend money at the local bakery and general store, but also peer into windows, clog parking spots, and in a few cases, walk into homes, locals say.

“They are rude,” said Sheila Owen, whose house doubled for the home of the supporting character “Ronnie.” “They come and expect us to be the same people portrayed in the show — that we are hicks who are stupid.”

That feeling is not universally held. Eleanor Todd, 87, got dressed up with her granddaughter to stroll up to the now-famous corner and take photos like all the tourists. It’s the busiest that intersection has been since Goodwood’s glory days, when it boasted two hotels, four general stores, a skating arena and both a cobbler and tailor. That was in 1885.

“I’m getting a kick out of it,” said Ms. Todd, a former teacher who wrote and self-published the hamlet’s authoritative history, “Burrs and Blackberries from Goodwood.”

Development in the hamlet has been greatly limited because it sits on ecologically sensitive land, the Oak Ridges Moraine. As a result, it has retained its quaint smallness and avoided the sprawl afflicting so many towns in southern Ontario. That’s what attracted Schitt’s Creek creators, Eugene and Dan Levy, according to their location manager Geoffrey Smither.

“They liked that feeling — here’s the town, there’s the country,” said Mr. Smither, who toured 28 small towns scouting for the perfect backdrop to the show. “None of them arise and depart like Goodwood.”

When he appeared before the local township councilors to ask for a filming permit, they burst out laughing and agreed.

“It was going to put us on the map,” said Bev Northeast, a former longtime councilor who lives in Goodwood.

Locals says fans started to appear in 2016, a year after the show premiered on the Canadian Broadcasting Corporation, the national broadcaster, but really ramped up after Schitt’s Creek was taken up by Netflix in 2017. By the summer of 2019, two chartered buses arrived to the intersection, spilling out people in matching T-shirts and lanyards that said “SchittCon.” (That’s short for Schitt’s Creek Convention.)

But no one was prepared for the deluge of fans that descended after Schitt’s Creek swept the Emmys in September.

So many people streamed into the local bakery, Annina’s, that the owner, Marco Cassano, hired two security guards to do crowd control. Since Annie Murphy — who plays Alexis, the socialite-daughter-with-a-heart-of-gold — told the late-night talk show host Seth Meyers about the bakery’s delectable butter tarts, he’s been fielding orders from across the United States.

“It’s meant I stayed open throughout Covid and kept most of my staff,” said Mr. Cassano, who catered for the crew over five seasons.

Across the street, Mr. Toby was inspired, by the crush of Schittheads asking for tours of his workshop, to build a donation box by the front door. In one weekend, he raised $270 for the local hospital and historical center, he said.

“For years, I was the best kept secret in Goodwood,” said Mr. Toby, 75, who is a natural storyteller and enjoys holding court. “Nobody knew what I did in here.”

He knows some of his neighbors feel differently, and in part that’s because of the pandemic. In the window of the building across the street, a residence that was transformed into a cafe for the series, a handwritten message is taped in a window: “Please stay off property during pandemic, we are immunocompromised.”

At the beginning of the pandemic, the show’s co-creator Dan Levy pleaded for fans to keep away. “The towns where we shot Schitt’s Creek were so lovely and accommodating to us,” he tweeted. “Please show them the same respect. Visiting right now is a threat to the residents’ health and safety.”

That didn’t stem the pilgrimage any more than the mounting layers of snow.

Marilyn Leonard owns the building that for more than a century, was Goodwood’s general store. In Schitt’s Creek, it was transformed into the hipster “Rose Apothecary,” selling body milks and cat-hair scarves. Ms. Leonard decided to shut it permanently last month.

“It’s too exposing for me,” said Ms. Leonard, 74, who plans to convert the space into an appointment-only gallery. “I need to stay away from people.”

The motel that served as the set for the family’s new residence in the series is not in Goodwood, but in Mono, about 50 miles west. One day, so many people crowded around the motel that the owner called the police.

“At least 100 cars an hour were trying to get in,” said Jesse Tipping, pointing out that his motel, which hasn’t been operational for years, has garnered dozens of satirical reviews on Google maps. “ At one point, I saw somebody on the roof. They were stealing numbers off the doors, taking the welcome mats.”

Mr. Tipping, who is currently selling the motel, said he asked Dan Levy about selling paraphernalia at the site. The show, however, has signed an exclusive merchandise agreement with ITV Studios in London.

That means no one in Goodwood is getting rich off the sudden fame. Plans to run a Schitt’s Creek tour on the local heritage railroad were scuttered by the pandemic. The 145-year-old yellow brick town hall, which hadn’t hosted a council session in almost 50 years, would have the perfect place to host tours, conceded Dave Barton, the mayor of Uxbridge Township, which includes Goodwood. Unfortunately, the township sold the building a year ago to a couple who is converting it into a private home.

“Nobody expected that Schitt’s Creek would be the most famous Canadians show in forever,” Mr. Barton said.