TORONTO — Before the Canadian show “Schitt’s Creek” swept the Emmys this month and catapulted its creator, Dan Levy, into Hollywood’s stratosphere, he announced that he was going back to school, and wanted his fans to join him.

Within two weeks, 64,000 people had signed up for the online course he was taking, “Indigenous Canada” — more than had completed the free program over its three-year history.

In an era of celebrity endorsement and “voluntourism,” Mr. Levy has turned the fire hose of his ever-growing popularity to a matter that Canada struggles openly with — how to atone for systemic racism against the country’s Indigenous people, and rebuild those relationships.

“Because if 2020 has taught us anything,” Mr. Levy explained in his Instagram post about taking the course, “it’s that we need to actively relearn history.”

Created in 2017 by professors at the University of Alberta in Edmonton, the 12-week course covering Indigenous histories and contemporary issues in Canada is entirely online, with no real-time professor interaction.

But since he began the classes, Mr. Levy has broadcast a study group every Sunday afternoon in which he meets virtually with professors from the university to go over the lessons, which cover topics like creation stories and an Indigenous perspective on the hundreds of treaties that First Nations signed with the colonial government to share land.

Every week, thousands of people watch.

“I’m learning a lot of this embarrassingly late in the game,” Mr. Levy said during the first discussion. “But ultimately these stories are crucial to the identity of our country.”

In 2015, a Truth and Reconciliation Commission put out a historic report detailing Canada’s horrifying history of using residential schools as weapons of assimilation against Indigenous people. Over more than a century, Indigenous children were separated from their families and cultures and forcibly sent to those schools. Many were physically and sexually abused.

Among the commission’s many recommendations was a revamping of the country’s education system — which it pointed out had until recently taught history though a colonial lens, casting First Nations, Inuit and Metis as “bystanders, if not obstacles, to the enterprise” of nation building. It also demanded that the curriculum incorporate the history of residential schools.

But that hasn’t happened in some parts of the country.

“I’d be very curious to know how many Canadians have this information,” Mr. Levy said during last Sunday’s online meeting about residential schools. “I think if more knew, more would be acting on the rage they feel.” 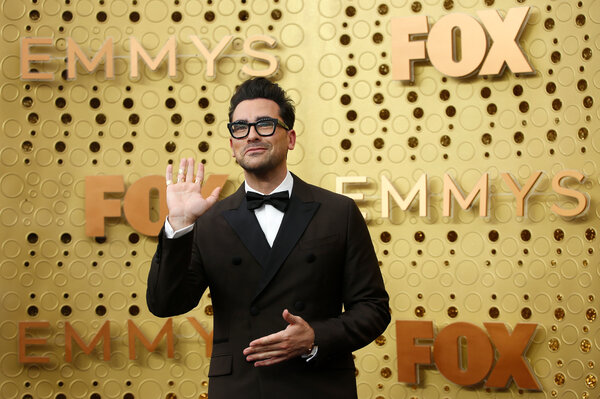 The online course was developed by Tracy Bear, an assistant professor of Native Studies who also teaches in a woman’s prison. She called Mr. Levy “an average student, with average knowledge.”

“Generally, we can get a sense of how Canadians are feeling and thinking through these conversations,” she said.

When an email from Mr. Levy landed in Dr. Bear’s inbox last month, she had no idea who he was. Nor did her colleague Paul Gareau, a Metis scholar who runs the online course.

They scanned Mr. Levy’s social media accounts and decided to take him at his word, that he wanted to re-educate himself and encourage others to follow suit. The offer came at an opportune time: The university is slashing positions and merging faculties in the face of steep provincial funding cuts.

“We never have this kind of coverage for anything we do,” said Dr. Gareau, an assistant professor who hasn’t seen a single episode of “Schitt’s Creek.” “People love Dan Levy so much.”

Mr. Levy’s public education campaign comes at a time of increasing cynicism among Indigenous activists about Canada’s commitment to reconciliation, which Prime Minister Justin Trudeau has said is central to his government. Activists point to continued over-policing of their communities, underfunding of their schools and lack of respect for treaty rights for fishing and hunting as bitter proof that little has changed.

“Imagine if everyone just honored the treaties, recognized our sovereignty and stopped actively trying to extinguish us!” Jesse Wente, an Ojibwe broadcaster and chairman of the country’s largest arts funding organization, tweeted about Mr. Levy’s announcement. “Oh the likes on social media you would get!”

Mr. Levy did not respond to requests for an interview.

The son of the comedic actor Eugene Levy, Mr. Levy grew up in Toronto and went to university there; despite owning a house in Los Angeles, he still calls this city his hometown. The night after his show won a record nine Emmys, he tweeted a selfie in front of Toronto’s iconic CN Tower, glowing gold in his show’s honor.

Last Sunday, hours before arriving at Toronto’s only castle for the Emmys — the most important night of Mr. Levy’s career so far — he went online to discuss the week’s lesson.

Hosted on Zoom, the weekly meetings feel like an intimate discussion over tea with the professors in their homes. Their faces are so close to the screen that viewers can almost trace the lines of a Nehiyawak tattoo on Dr. Bear’s chin and inspect the horseback family photo behind Dr. Gareau’s desk.

Over more than an hour, they discuss questions classmates have sent in, while laughing and sharing personal stories in a relaxed way.

Each session begins with Dr. Bear lighting a small piece of sage and wafting the smoke over her face, arms and hair in a smudge, or “spiritual cleansing.” The sessions, it becomes clear, are as much about Indigenous ways of knowing and learning, as the historical content.

“You can’t just read about it abstractly in an ethnography and absorb it in the Western possessiveness sense of knowledge,” said Dr. Gareau, an expert on Metis history who sees his role in the sessions as bringing levity. “The Indigenous articulation of knowledge is through experience and visiting.”

“A big part of what I love about this thing we do with Dan,” he added, “is we are visiting.”

On the other side of country, in his parents’ Toronto home where he’s returned to weather the pandemic, Mr. Levy is an earnest listener, absorbing each lesson, extrapolating from it and mixing in his Jewish ancestry and experiences as a gay person.

“The word discovery is used time and time again in our learning,” he said in a discussion about the fur trade between First Nations and colonial merchants. “They didn’t discover a place. It was inhabited. They just visited a place and happened to take over.”

He continually repeats how grateful he is for the weekly discussions. He calls them “my favorite part of the week.”

For fans, the experience has been a giant consciousness-raising session.

“It made me ashamed of my country and the lack of my knowledge,” said Sharon Thirkettle, a 70-year-old artist from Calgary. Although it was Mr. Levy’s participation that inspired her to sign up for the course, she said she had stuck with it because of the engrossing subject matter.

“Not just my brain, but my heart and body is connecting with this,” said Ms. Taviano, a 44-year-old writer in Columbia, S.C., who takes copious notes throughout the sessions and has ordered many of the books mentioned by professors.

While some have criticized the adulation Mr. Levy has garnered for learning something they think should be basic Canadian knowledge, his new professors see him as an ally. They hope to create four more online courses about structural racism and stereotypes, from an Indigenous perspective. This time, Dr. Bear said, they will charge for them.

“A lot of people are asking for more,” she said.

She added in an email, “The facts are these: Due to Dan Levy, more people than ever are engaging with this difficult history, learning not only about Indigenous people’s challenges, but our resiliency and strength.”