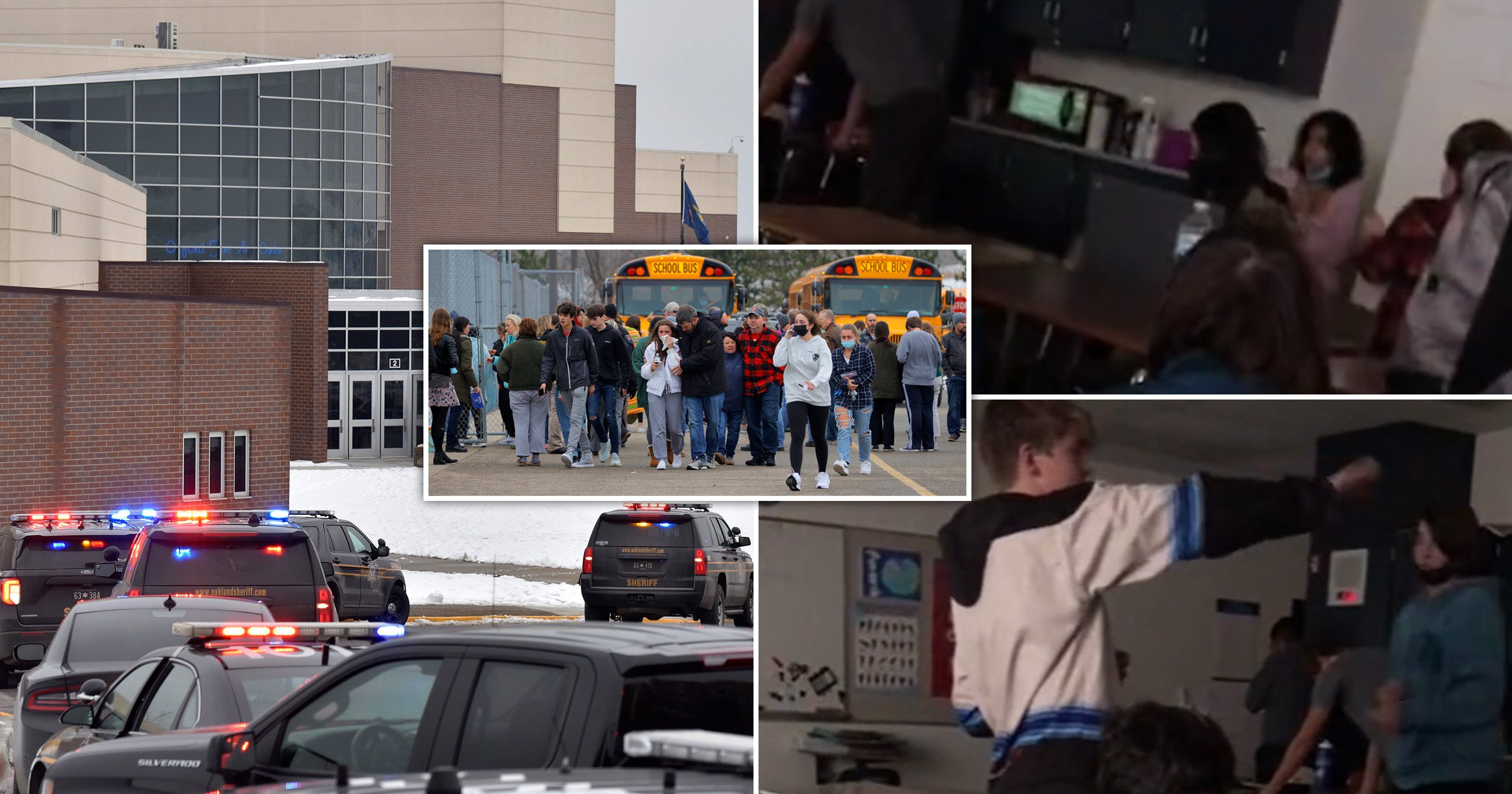 A suspected school shooter tried to lure fellow students to their deaths by posing as a cop and telling them it was safe to come out.

Dozens of terrified teenagers barricaded themselves in their classroom yesterday while a gunman roamed the corridors of their school in Michigan.

Video from the scene showed the shooter tried to reassure those inside by shouting ‘sheriff’s office, safe to come out’.

A teacher, talking to the gunman through the locked door, told him they ‘weren’t prepared to take that risk right now.’

The man’s use of the word ‘bro’ in his response alerted his classmates that he wasn’t who he was pretending to be and they all jumped out of a window.

Tate Myre, 16, Hanna St Julian, 14, and Madisyn Baldwin, 17, were killed when a 15-year-old sophomore opened fire at Oxford High School at around midday.

Eight others were wounded, some critically, including a girl, 14, who was placed on a ventilator after surgery.

The suspect’s father had bought the semi-automatic pistol used in the shooting on Friday, Oakland County Sheriff Michael Bouchard said, adding that he did not know why the man bought the gun.

The boy apparently ‘had been shooting’ with the gun before Tuesday’s attack and had posted pictures of the weapon and a target he was using, according to the sheriff.

Investigators are still trying to work out a motive for the ‘unspeakable and unforgivable’ act of violence but Mr Bouchard said: ‘The person that’s got the most insight and the motive is not talking.’

The boy’s parents have hired a lawyer and denied authorities permission to interview their son, Mr Bouchard said.

The bloodshed unfolded in the small town of Oxford, Michigan, about 40 miles north of Detroit.

A teacher injured when a bullet grazed her shoulder has been discharged after receiving treatment but seven students, aged between 14 and 17, are still in hospital with gunshot wounds.

Police were on the scene in minutes after receiving more than 100 phone calls about the shooting.

The boy put his hands in the air when they found him in the hallway and did not try to resist arrest.

His gun still had seven rounds of ammo in when he was apprehended but he’d fired 15 to 20 rounds during the rampage, which lasted no more than five minutes.

Isabel Flores, a 15-year-old ninth grader, told WJBK-TV that she and other students heard gunshots and saw another student bleeding from the face. They then ran from the area through the rear of the school, she said.

Student Abbey Hodder told the Detroit Free Press she was in chemistry class when she heard the sound of glass breaking.

‘My teacher kind of ran out and was scrambling,’ Hodder, 15, told the newspaper. ‘The next thing I knew I saw he was pushing tables. It’s part of school protocol to barricade, so we all knew, barricade, barricade down. And we all started pushing tables.’

A vigil for those killed was held at the LakePoint Community Church last night as the 22,000 residents of the small community tried to come to terms with what had happened.

President Joe Biden was among those to pay tribute to those killed in yet another high school shooting.

During a visit to a Minnesota technical college, he said: ‘My heart goes out to the families enduring the unimaginable grief of losing a loved one.’