LONDON — The intruders arrived during the night with the wind and high tide. By the morning of Jan. 3, it seemed like the little Canadian town had been overrun.

Seals, dozens of them. Seals on the beach, seals on streets and driveways, seals in parks and backyards.

More than a week later, they are still there in Roddickton-Bide Arm, a remote little town on the island of Newfoundland, the mayor, Sheila Fitzgerald, said on Friday.

And it has become clear that the animals, hungry and distressed, are stranded, unable to find their way back to the sea.

Harp seals spend winters in the waters off Newfoundland, and it is common for them to go ashore at times, and to swim into bays like the long, narrow ocean inlet that borders Roddickton-Bide Arm, said Garry Stenson, head of the marine mammal section at Canada’s Department of Fisheries and Oceans.

“Then if the ice freezes up behind them, they have a harder time getting access to water,” he told the Canadian broadcaster, CBC. “It’s almost like they get going in a direction and just keep going, hoping that they’re going to eventually find water that way.”

At first the seals in Roddickton-Bide Arm, each one about five feet long and weighing about 300 pounds, crowded around the town’s two brooks that do not freeze over in the winter. Then they spread out, rolling around in the deep snow and barking like dogs. Residents began to worry that the seals were there to stay through the winter — or might starve. 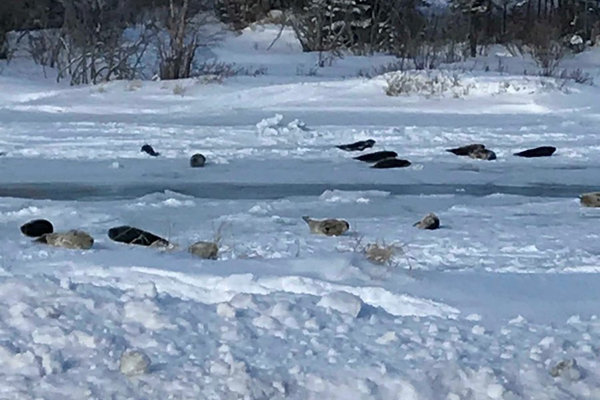 “They’re very cute little creatures,” Ms. Fitzgerald in a telephone interview. “They look so calm when you just look at them, they look so cute but they’re still wild animals.”

She said the town hall was getting calls from people who have seen pictures and video of the seals online, asking why residents do not help or feed the seals. But in Canada, it is illegal to disturb marine mammals — not to mention potentially dangerous — including touching, feeding and even getting near them.

There are at least 40 seals in and around Roddickton-Bide Arm, population 999, the mayor said, and possibly many more.

Officials from the Department of Fisheries and Oceans are in the town, on Newfoundland’s mountainous and sparsely populated Great Northern Peninsula, to assess the number of animals and find a strategy to help them get back to sea.

The situation is less than ideal for the people as well as the animals. The seals’ silver-gray fur makes them blend in with the color of icy roads that are dusted with sand in the winter months.

People try to avoid them, but two of the seals have died, run over by vehicles. And wildlife experts have warned that, like dogs, the seals can get aggressive when scared, and bite.

Harp seals, millions of which live in and around the far north Atlantic and Arctic, are known for their pups, whose white coats help them blend in with snow and ice.

Ordinarily, the people of Roddickton-Bide Arms have no problem with the creatures, but now they are ready to get back to their traditional wildlife boast, that the town is the “Moose Capital of the World.”

“We’re ready for them to move on,” Ms. Fitzgerald said. “Right now the whole of the talk is about seals.”