The similarities in the sermons are unmistakable.

“I don’t think I’ve given you this before,” the pastor in North Carolina tells his congregation. He goes on to list “five selfs” that signify hostility to God: self-will, self-glory, self-gratification, self-righteousness and self-sufficiency. Cut to an older pastor in Alabama, at a lectern a year later: “Let me give you five selfs,” he says. He rattles off the same list.

A video comparing the two sermons has racked up thousands of views online in recent days, partly because the two men are not just any church leaders: The first, who delivered his sermon in 2019, is J.D. Greear, the departing president of the Southern Baptist Convention. The other is Ed Litton, who was elected as Mr. Greear’s successor just a couple of weeks ago by a thin margin at an unusually contentious meeting. His sermon was delivered in 2020 and did not credit Mr. Greear.

And the dust-up has revealed a dirty little secret of the preaching life: Many pastors borrow from one another in the pulpit, and the norms around the practice are fuzzy at best.

Over the past week, anonymous YouTube accounts have posted multiple side-by-side comparisons of the two men preaching, highlighting nearly identical metaphors, anecdotes and turns of phrase. Mr. Litton’s church removed sermons from 2017 through 2019 from its website and YouTube, attributing the deletions to both a website redesign and a response to people “going through sermons in an attempt to discredit and malign our pastor.” Mr. Litton declined an interview request through a spokesman.

In a statement, Mr. Litton said he had asked Mr. Greear for permission to borrow from at least one sermon and apologized for not crediting him; Mr. Greear confirmed his account. But accusations of lying and stealing — and plenty of memes skewering Mr. Litton — are flying fast. Some of the same Baptists who opposed Mr. Litton’s election are now calling for his resignation.

“This is an issue of morality, and it’s an issue of Christian virtue,” said Tom Ascol, a high-profile Florida pastor who has been critical of Mr. Litton and Mr. Greear. “It’s something that as recently as 10 years ago, everyone in conservative evangelical circles would say, ‘Of course pulpit plagiarism is wrong.’”

Karen Swallow Prior, a professor at Southeastern Baptist Theological Seminary, who has written about plagiarism, called the episode surprising. “What this whole thing has opened up is there are people who have an unstated expectation that a pastor is delivering his own examination and wrestling with the biblical text, and others who may not have that expectation at all.”

Among church leaders, attitudes toward the practice vary widely. Al Mohler Jr., president of the Southern Baptist Theological Seminary, has called it “despicable”; the influential retired pastor John Piper has said it is “unthinkable.” But some prominent pastors have offered others carte blanche to borrow liberally from their work, saying personal glory should never be the point of preaching. Others encourage heavy inspiration but not wholesale copying. As the oft-cited — though not always attributed — line goes from the longtime Southern Baptist pastor Adrian Rogers, “If my bullet fits your gun, shoot it, but use your own powder.”

Condoned or not, the practice, once revealed, can leave a bad taste. Within Protestantism, especially, pastors’ weekly sermons are their most high-profile and highly scrutinized work product. Worship services often culminate in the delivery of a presumably original sermon, which can last 45 minutes or more.

“When congregations ‘call’ or hire a pastor, they’re calling that person to preach,” said Thom Rainer, chief executive of the consulting firm Church Answers, which advises church leaders on issues including growth and communications. “Preaching is central.”

But a great sermon is also laborious to produce. It can include deep analysis of biblical texts, historical research, compelling anecdotes, a dose of humor and a stirring call to action. Now imagine producing at least one such message every week, year after year, all based on the same collection of texts and delivered to the same audience.

Some full-time pastors report spending up to 30 hours a week on the task; more common is devoting two full work days to it.

For many churchgoers, a sermon is not just a clever speech but proof of the pastor’s deep spiritual life. “A sermon is a person studying the Bible, encountering God in their own life and history, and then spewing it all out on Sunday morning for the good of the people of God,” said Scot McKnight, a professor of the New Testament at Northern Seminary in Lisle, Ill. “It’s a personal encounter.”

With access to the most charismatic pastors and snappiest sermons via YouTube and podcasts, churchgoers’ standards are rising, Mr. McKnight said. Many megachurch pastors become household names far from their own communities purely because of their preaching. “They’ve built these big churches because of their charisma,” he said. “It has really hurt the small-church pastor.”

Revelations of egregious pulpit plagiarism can rattle churchgoers who believe they are receiving their pastor’s original wisdom.

Near Nashville, Andy Traub was stunned when his church announced that its pastor had been plagiarizing whole sermons, including personal anecdotes that he had presented as his own.

“How do you find out about your pastor?” Mr. Traub asked. “For the vast majority of people, it’s from his sermons. If 95 percent of the stories he told us were not true, then who is he?”

Mr. Traub’s pastor left the church in 2016, and now leads a congregation in Michigan.

Spot-checking has become radically easier just in the past year. Forced by the pandemic to gather online, many churches scrambled to ramp up their technological capabilities. Now, Mr. Rainer estimates that more than 70 percent of Sunday sermons are posted on the internet.

“Sermongate” has also prompted a sprawling debate about the widespread practices of ghostwriting and research assistance that takes place out of the view of many ordinary churchgoers.

Full texts and outlines of sermons are widely available on websites like Sermon Central and Logos, ostensibly for reference and inspiration. Consulting services like Docent Research Group offer pastors substantial help with research and planning. Some larger churches, including Mr. Litton’s, employ in-house “preaching teams” that collaborate on sermon production. 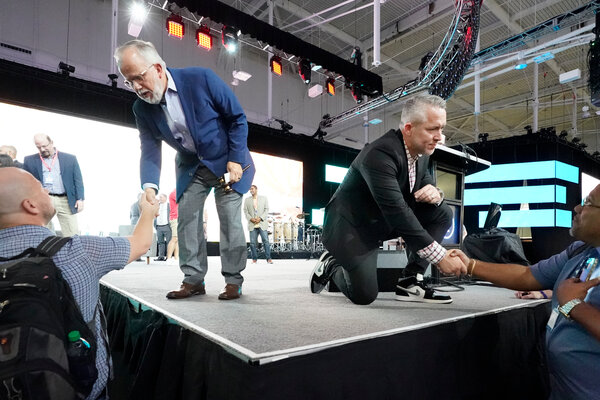 In a now-deleted endorsement on Docent’s website, Mr. Greear thanked the organization for saving him time on sermon prep. “I often have people remark to me, ‘How many hours did you spend on that sermon? Where do you get time to do all that research?’” he wrote. “Ha. Thanks, guys, for making me look so good!”

In an email, Mr. Greear said he had sometimes relied on “research assistants and other aids” to help him prepare sermons, a practice he had discussed openly in the past﻿.

“The dilemma of sermon research is that we are trying to express God’s word, which never changes, in our unique context and with our unique voices,” he said. “That requires deep awareness of the work of others and a commitment to expressing those timeless truths originally.”

For some who have quietly contributed to sermons over the years, the episode also raises painful questions about who is allowed to speak with authority and who is not.

Gena McCown, a writer in Florida, recalled an incident several years ago when her pastor at the time asked her to send him an outline with bullet points for a sermon he was planning on a thorny topic she knew well. The church did not ordain women as pastors, or allow them to preach on Sunday mornings.

Ms. McCown was indignant but did not want to stir up trouble. She “did the bare minimum,” sending the pastor some brief notes and resources.

“It’s a huge double standard,” she said of asking women to contribute uncredited insights within churches that bar them from preaching. “If you truly believe she can’t get up on that stage and deliver the sermon herself, then she can’t write it. Stand on that conviction.”

Mr. Litton has said he relies on a team of eight men to help craft his sermons. In a podcast interview released on Friday, he said the process lets him mentor aspiring leaders and “keep my voice young.” He vowed to do a better job crediting his sources in the future.

What is certain is that the temptation to crib on Sunday mornings is not new. In his autobiography, Benjamin Franklin wrote of his admiration of a young Presbyterian preacher much respected for his preaching, which was apparently delivered extemporaneously. When a doctrinal dispute erupted in the congregation, however, an adversary recognized that a passage delivered by the preacher had been lifted from an uncredited source.

Franklin stuck by the plagiarist. “I rather approved his giving us good sermons composed by others,” he wrote, “than bad ones of his own manufacture.”