For much of the New York City mayor’s race, Andrew Yang has been a dominating presence, leading in limited early polling and siphoning attention from his rivals.

A former campaign worker, Jean Kim, said Mr. Stringer sexually abused her during his 2001 campaign for public advocate. At least four mayoral candidates have called on Mr. Stringer to drop out of the race.

On Friday, Mr. Stringer lost several major endorsements from left-leaning politicians and political organizations, which has thrown his campaign into turmoil, and altered the dynamics of the contest — one of the city’s most consequential mayoral elections in a generation. More leaders withdrew their support over the weekend, including Representative Adriano Espaillat, a key Latino ally. 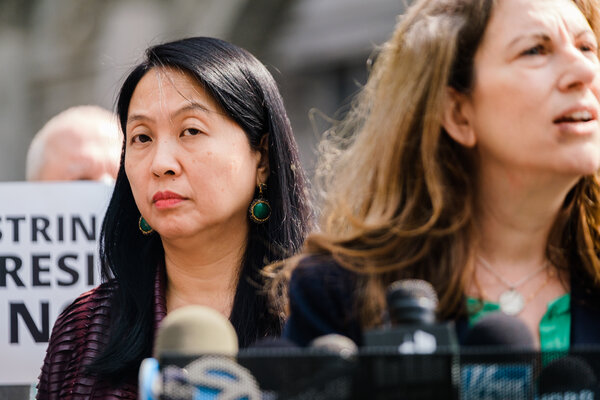 Mr. Stringer has vociferously denied Ms. Kim’s accusations, saying that they once had a consensual relationship over the course of a few months. He vowed to “fight for the truth because these allegations are false.” Part of that effort seems to be rooted in discrediting Ms. Kim, and portraying her as politically motivated.

Soon after Ms. Kim went public with her accusation, Mr. Stringer said that his relationship with Ms. Kim was friendly until 2013, when she wanted a job on his campaign for comptroller and did not get one. On Friday, his campaign accused her of “working for Mr. Yang.”

“I do not work and have never worked for the Andrew Yang campaign,” Ms. Kim said in a statement. “I’ve never met him, and I have not decided who my choice is for mayor of New York City.”

The Stringer campaign said Ms. Kim had filed petitions to help Mr. Yang get on the ballot. Ms. Kim said she was circulating the petitions for her friend, Esther Yang, who is running as a district leader in Manhattan and is aligned with Mr. Yang.

Ms. Kim, a lobbyist who has worked in politics for years, said she believed it might be time for the city to elect its first female mayor. She said that she came forward because of the “gnawing feeling in my gut every time I saw him touting his support for women” and was not surprised by Mr. Stringer’s efforts to discredit her.

“It is exactly what I expected him to do,” she said. “Lie, attack and retaliate.”

Maya Wiley, a former counsel to Mayor Bill de Blasio and one of three female mayoral candidates calling on Mr. Stringer to drop out, said on Twitter that Mr. Stringer had started a “smear campaign” against Ms. Kim and called it “disgusting.”

The sexual assault allegations opened another line of criticism against Mr. Stringer, as several local leaders said that his aggressive response toward Ms. Kim’s claims was part of a broader pattern.

Helen Rosenthal, a city councilwoman on the Upper West Side, said she had been “on the receiving end of his crude and vengeful actions.”

Ms. Rosenthal, who is supporting Ms. Wiley in the mayor’s race, said that when she and Mr. Stringer were on opposing political sides, he threatened not to work with groups that supported Ms. Rosenthal.

Others including Ben Kallos, a city councilman from the Upper East Side who is running for Manhattan borough president, and Marti Speranza Wong, the leader of a group, Amplify Her, that seeks to elect women, shared stories of bullying behavior by Mr. Stringer.

At the same time, a group of women including Betsy Gotbaum, the city’s former public advocate, and Ruth Messinger, a former Manhattan borough president who unsuccessfully ran for mayor in 1997, urged caution when considering the allegations.

Their statement, released through the Stringer campaign, said: “Believing women means accepting the allegation and investigating it thoroughly and objectively.”

Mr. Yang, the former presidential hopeful, has done well in the race despite not landing major endorsements; he had hoped to change that by getting the backing of the powerful union that represents subway and bus workers.

Mr. Yang had met in March with John Samuelsen, a top leader of the Transport Workers Union of America, who had expressed support for Mr. Yang’s views on automation.

“There is a technological revolution coming across all transport sectors, with a huge potential negative impact on public transit workers and service delivery,” Mr. Samuelsen said at the time. “Andrew Yang speaks powerfully in defense of workers, and understands that people come before profits.”

But the union ultimately backed Eric Adams, the Brooklyn borough president, whom officials have known for much longer. Mr. Adams has been a voice for subway riders and workers as the system fell into crisis in recent years.

“He’s stood with us in many battles and has always been there for us,” said Tony Utano, the president of the local transit union. “He’s earned this endorsement and richly deserves it.”

Mr. Yang did win the support last week of leading Hasidic sects in the Borough Park neighborhood in Brooklyn. Mr. Yang has been courting Orthodox Jewish voters and has defended the yeshiva education system, which has faced criticism over not providing a basic secular education.

After Mr. Stringer was accused of sexual assault by Ms. Kim, the three top-tier female candidates for mayor quickly called for Mr. Stringer to either withdraw from the mayor’s race, resign as city comptroller or both.

They were joined by Shaun Donovan, the former federal housing secretary, but not by the three other leading male candidates.

Mr. Yang, Mr. Adams and Raymond J. McGuire, a former Wall Street executive, all said that they believed Ms. Kim but stopped short of calling for Mr. Stringer to withdraw from political life.