Kayla Bergeron can still describe that morning in matter-of-fact detail: She was dutifully working at her desk on the 68th floor when the building lurched. Someone ran in and said that a plane had hit — a small plane, she assumed. She realized it must not have been just a Cessna.

And then how she began a harrowing descent in a stairwell that was dark and wet because pipes had burst as the twin towers collapsed.

She can also describe her life since, including the loss of a new job, the foreclosure of her condominium, the two convictions for drunken driving and, just last year, the diagnosis from a court-ordered alcohol treatment program: post-traumatic stress disorder stemming from Sept. 11, 2001.

“PTSD never occurred to me,” said Ms. Bergeron, who was a high-ranking official at the Port Authority of New York and New Jersey in 2001 and whose office was in the north tower. “We weren’t first responders. We weren’t cops or firefighters whose job was to go into the building. People told us, ‘Be happy to be alive.’ We minimized ourselves afterward, and it all built up over the years.”

In the 18 years since the terror attacks, the police officers and firefighters who rushed into the flaming towers have been honored with a memorial at ground zero.

On Wednesday, the names of those who died, read every Sept. 11 at a ceremony there, will be read once again, even as the number of people who have reported being sickened by their work on the so-called pile continues to rise. Congress, after a fight last summer championed by the comedian Jon Stewart, voted in July to replenish the fund that covers their medical care. 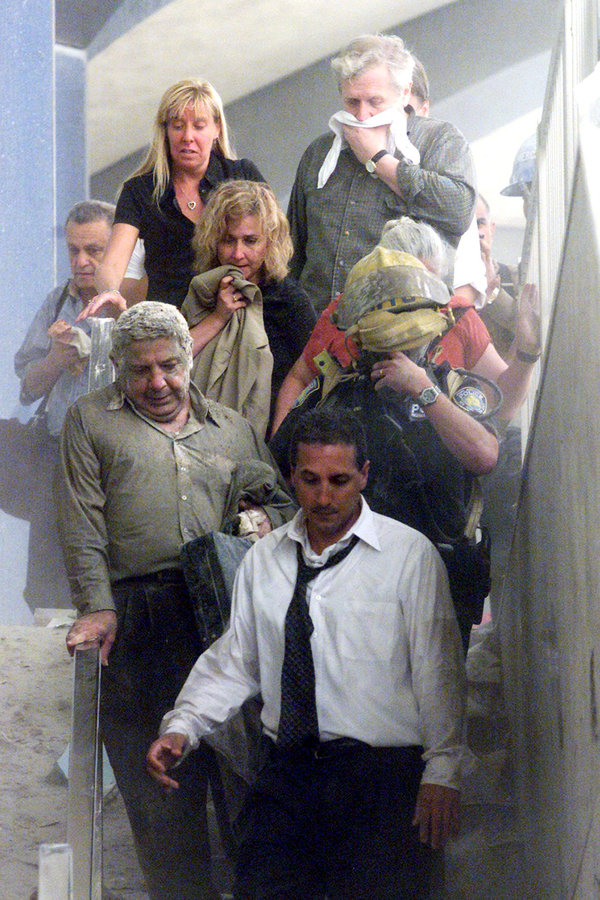 But thousands of civilians like Ms. Bergeron — people who worked in the trade center or were in the nearby area when the twin towers collapsed — also survived. Some have developed physical symptoms. Some have not. But together they have become a largely overlooked segment of the World Trade Center community.

Now many worry that national attention is focused elsewhere and that people will forget that those who witnessed the horror of Sept. 11 up close can still develop symptoms of ailments like post-traumatic stress disorder.

“PTSD doesn’t have a time limit,” said Dr. Jacqueline M. Moline, the director of Northwell’s Queens World Trade Center Health Program, which provides monitoring and treatment for dozens of illnesses. “People can develop PTSD related to an event years later.” Often, she said, it is not clear what triggers the disorder.

Of those who fled the towers or the nearby destruction, 2,625 — or about 12.3 percent of all survivors registered in the program — have post-traumatic stress disorder, according to data from Northwell Health. Another 675 have anxiety disorders, and 661 others have what the program classifies as major depressive disorders.

“PTSD is the most common illness in the 9/11 community,” said John Feal, who worked as a demolition supervisor at ground zero and became one of the leading advocates for a permanent victims compensation fund.

Even now, some survivors replay the disaster in their minds. They have nightmares about it. They jump when they hear loud noises. They avoid anything that reminds them of that day.

Dr. Rachel Yehuda, a professor and vice chairwoman of psychiatry at the Icahn School of Medicine at Mount Sinai Hospital, said research has shown that people “in close proximity to a trauma who don’t have symptoms can get them later on.”

Usually, she said, the symptoms are brought out by “a trigger in the here and now.”

The triggers could include ordinary elements of daily life. For example, a bright late-summer morning could serve as a reminder of Sept. 11, 2001, and touch off memories of the planes taking aim at the twin towers. Sounds could have a similar effect.

“From the time I was 17 on, I couldn’t listen to an airplane overhead or a helicopter, or a car backfiring,” said Lila Nordstrom, who was a senior at Stuyvesant High School in Lower Manhattan in 2001 and now lives in Los Angeles. “If I was in traffic and someone honked, it would lead to a protracted period of me panicking. It took a while for me to realize it was happening, and it took a while after that to realize it was 9/11-related.”

She said that she was certified for post-traumatic stress disorder under the World Trade Center Health Program in 2015.

For Elinda Kiss, a business school professor who was attending a conference in the Marriott World Trade Center hotel on Sept. 11, driving past Newark Liberty International Airport on the way to teach at the Rutgers University campus in Newark would bring a replay of her frantic run to safety.

“I would see the planes coming in for a slow landing,” she said. “I would relive seeing the plane hit” the south tower.

She said she assumed her post-traumatic stress had largely disappeared over the years. But on Sunday night, lying awake, the nightmare replayed again and again. “I kept seeing the plane hit in the middle of World Trade 2,” she said.

Ms. Bergeron, the former Port Authority official, said she took almost no time off after the attacks. “There was no time to grieve,” she said.

Compounding the pain — and the pressure to continue — was the loss of her boss, the executive director of the Port Authority, Neil D. Levin, who was killed in the attacks.

As the years passed, Ms. Bergeron remained largely out of the public spotlight until 2006, when she was quoted in articles about the last aboveground remnant of the World Trade Center, a part of the staircase that she had taken to safety. She called it “the path to freedom.”

Ms. Bergeron said she left the Port Authority in 2006 for a state-funded job in Florida, in part to be closer to her aging mother, who lived in Georgia and had developed lung cancer.

Over the next few years, her mother died, her job was eliminated in a round of budget cuts and her savings ran out. She lost her condominium in West Palm Beach, Fla., to foreclosure.

In 2013, she was arrested and charged with driving under the influence in Parkland, Fla., and her driver’s license was suspended for several months. She later moved to Georgia to live with her father, and there she found a job making sandwiches in a fast-food restaurant.

She said that drinking had not become a constant in her life but that she was depressed and felt anxious “all the time.”

The arrest last year came late at night after a long day at the restaurant. She said she stopped at a tavern and had a couple of glasses of wine, then drove to a Mexican restaurant where she had dinner — and more wine.

When she and her father went to retrieve her car, she was surprised to see that the front end was damaged. The police told her father that after she left the Mexican restaurant, she hit the back of another car that was stopped at a red light.

She was offered a choice of jail or a program called accountability court, which offers intensive counseling, treatment and monitoring.

Carol Simpson, the assistant director, said that those who enter the program must agree to spend at least 24 months in it. Ms. Bergeron has just completed her 18th month. Ms. Simpson said that post-traumatic stress disorder “is something we treat in our program pretty regularly.”

Ms. Bergeron said she could find no World Trade Center survivor groups, either in New York or in Florida when she was living there. The World Trade Center Survivors Network, a nonprofit set up soon after the attacks, ran an outreach program that was intended to help survivors come to terms with their experiences.

But in 2007, the group removed its president when The New York Times published a story questioning her account of escaping the twin towers. (She was in Barcelona attending business school.) The last post on its website appears to have gone up in 2017. Several people who were involved with the group did not return calls seeking comment.

One who did — Janice Cilento, a former board member — said it effectively wound down about two years ago. “It’s not really doing much right now,” she said.

“There are so many survivors out there who don’t realize they have issues from 9/11,” said Ms. Cilento, a therapist who was at home on Long Island when the planes hit the trade center. Her son, a volunteer fireman, was eventually sent to ground zero.

“So many suffer in silence. It’s 18 years later, and to some it’s pretty new.”

James Barron is a Metro reporter and columnist. He is the author of the books “Piano: The Making of a Steinway Concert Grand” and “The One-Cent Magenta” and the editor of “The New York Times Book of New York.”