For Miya Ponsetto, a nationally televised interview was an opportunity to apologize, her lawyer said, for falsely accusing a Black teenager of stealing her cellphone — and then tackling him — in the lobby of a SoHo hotel.

Instead, Ms. Ponsetto, 22, went off script. She stormed out of the disastrous interview with “CBS This Morning,” recorded on Thursday, only to be arrested hours later by California authorities. By the time the interview aired on Friday morning, Ms. Ponsetto was facing a charge of attempted robbery in New York, her attorney and police officials said.

Her personal attorney, Sharen H. Ghatan, said on Friday that she had become concerned for Ms. Ponsetto, who had behaved erratically in the hours before her arrest.

“My concern now is with her mental health and her well being,” Ms. Ghatan said. “She is behaving in a fashion that is completely of her own volition.” Of the interview, which was met with widespread derision online, Ms. Ghatan said, “I was embarrassed for her.”

At around 4:30 p.m. on Thursday, the police said, Ms. Ponsetto got into her vehicle outside her home in Piru, Calif., and ignored orders from police to stop. Deputies with the Ventura County Sheriff’s Office and two New York detectives who had traveled to California to arrest Ms. Ponsetto followed her for about a mile before she was finally detained, the authorities said.

In late December, Ms. Ponsetto was caught on video tackling Keyon Harrold Jr., the 14-year-old son of a prominent jazz musician, in the lobby of a boutique hotel in SoHo. She had falsely accused him of stealing her cellphone, and can be heard yelling, “No, I’m not letting him walk away with my phone!”

The video, which garnered widespread consternation on social media, was yet another example of Black people in America being confronted with baseless accusations while simply going about their lives. It drew comparisons to an incident in May, in which a white woman called 911 to falsely claim that a Black bird-watcher in Central Park had threatened her life. (Ms. Ponsetto, her lawyer said, is of Puerto Rican and Vietnamese descent.)

A New York police official briefed on the case said Ms. Ponsetto is facing a charge of third-degree attempted robbery because she was seen on the video lunging at the teenager and trying to grab his cellphone.

She is not being charged with a hate or bias crime “because she didn’t say anything about that,” said the official, who spoke on the condition of anonymity because Ms. Ponsetto had not yet been formally charged.

The Manhattan district attorney’s office did not comment on Friday. But a law enforcement official with knowledge of the investigation said prosecutors were not ruling out the possibility of additional charges. The official also asked for their name to be withheld because they were not authorized to speak publicly about the case.

During a court appearance in California on Friday, Ms. Ponsetto was transferred into the custody of the New York authorities, Captain Buschow said. She will be returned to New York to face robbery and other charges. 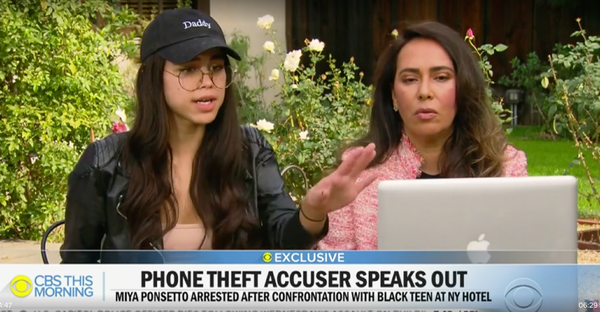 Sometime before her arrest, Ms. Ponsetto sat down for an interview with “CBS This Morning,” in which she said her actions were not racially motivated. She instead presented herself as a young woman who could have handled the situation better.

At one point during the interview she held up a hand to the camera and said, “All right, Gayle. Enough,” as Ms. Ghatan quietly pleaded with her to stop.

Ms. Ghatan said she canceled other media appearances for Ms. Ponsetto after observing her client grow increasingly erratic during her interview with Ms. King. Ms. Ghatan said she had repeatedly tried to interrupt her to no avail. “She went off script,” she said. “She decided to disregard my advice and just go on her own.”

“I don’t think she should have handled it the way she did,” Ms. Ghatan added. “She was prepared and guided. She apologized, but not in the way she should have. But she said so many other things that it almost blurred her message. It was so disrespectful.”

The video in question surfaced after Keyon Harrold, who was staying at the Arlo SoHo hotel with his son, Keyon Jr., recorded the incident and later posted the video on social media.

The video shows Ms. Ponsetto confronting Mr. Harrold and his son after they walk into the hotel lobby. She insists, without evidence, that Keyon Jr. has taken her cellphone. Ms. Ponsetto then asks a man who is heard identifying himself as a hotel manager for help. The video goes on to show the manager asking the young man to produce the cellphone, in an apparent attempt to confirm Ms. Ponsetto’s allegations.

Ms. Ponsetto had also tried to rummage through Keyon Jr.’s pockets, Mr. Harrold said in a recent interview with The New York Times. Mr. Harrold said he had been informed by hotel employees that an Uber driver had found Ms. Ponsetto’s phone later in the day, and that she had picked it up from the hotel.