Bertha Arriaga was resting in a bedroom with her three sleeping sons when she heard a commotion outside and went to the window. It was after midnight.

As she peered out of the third-floor window on her residential street in Jackson Heights, Queens, a bullet, fired outside, pierced the window and struck her neck, the police and her family said.

She collapsed on the floor, where her 14-year-old son found her bleeding and woke his father, who tried to resuscitate her as the boy called 911 around 12:45 a.m. She could not be saved, the police said.

“She was a really outstanding mom and wife,” Javier Aguilar, her brother-in-law, said in an interview. “It’s just a tremendous and honest loss.”

Ms. Arriaga, 43, an immigrant from Mexico, wanted to make sure her children received the education she did not have, he said. Instead, she became New York City’s 343rd murder victim this year, as the city, and other cities across the country, grapple with an unsettling rise in gun violence that has been unsparing in its toll.

More than 1,417 people have been shot this year across the five boroughs, and at least 214 of the victims have died, according to the police. Murders overall have risen nearly 40 percent over last year for the first nine months of 2020. Shootings have nearly doubled over roughly the same period, reaching the highest level in 15 years.

The violence has fueled a bitter political debate over what’s driving it and has put pressure on the city, and particularly on the Police Department, to find a way to curb it.

Some police officers were stunned by Ms. Arriaga’s death. “The chances of this happening: a million to one,” said one official, who asked to discuss the shooting on the condition of anonymity.

An hour after she was killed, a 25-year-old man working in an auto repair shop in Coney Island, Brooklyn, became the 344th murder victim: He was fatally shot in the chest by a gunman who drove by in a white van, the police said. Police withheld his name on Wednesday because his family had not been notified.

The police estimate that more than half of shootings in any given year involve people believed to be members of local gangs or street crews that feud over things like music, women and turf. Shootings often lead to reprisals, and only about a third are ever solved with an arrest.

“We have to get results,” Chief Terence A. Monahan, the highest-ranking unformed officer, said in an interview last month. “Too many bullets are flying in the city.”

It is difficult to even track how often bullets intended for others hit bystanders, said Christopher Herrmann, a professor of law and policing at John Jay College of Criminal Justice. Most shootings go unsolved, and determining the relationship between the shooters and the victims often requires a significant amount of investigative muscle.

But as shootings increase in the city, the number of people struck unintentionally by bullets will naturally rise, too. Even police officers only hit their targets about 40 percent of the time, Mr. Herrmann said, and untrained gunmen in the streets are less accurate.

His colleague, Maria Haberfeld, a professor of police science, pointed to another factor: The turmoil of this year — marked by a pandemic, unrest over police killings, a divisive national election and a spike in violent crime — begets recklessness, she said.

“People who use guns, especially the ones who use illegal guns, even these individuals do not necessarily want to kill bystanders,” she said. “But at this point there seems to be just a feeling of, ‘There is no tomorrow.’ There is no sense of a larger, longer picture.”

In Jackson Heights, the police released video of two men who investigators believe might have witnessed the shooting that killed Ms. Arriaga while they were attempting to steal a bike.

The men, who appeared to be attempting to saw off a chain tethering the bike to a street sign, left moments before the shot rang out, according to the police, who offered a $10,000 reward for information.

“In this case, a mother is cut down by a bullet not intended for her in her home with her three children and her husband,” Assistant Chief Galen Frierson, the commanding officer of the Queens North patrol borough, said on Wednesday. “Any help you, the public, can give us would be greatly appreciated.”

Ms. Arriaga’s neighborhood is an enclave for immigrant families, many of them Spanish-speaking, and has a burgeoning food scene. Mel Bloomer, 44, said he has lived there since 2002 and has never felt unsafe.

He said his girlfriend had heard a gunshot that night. “Seeing that bullet hole," he said, pointing to the broken window, “it’s just so tragic.”

Ms. Arriaga was born in Mexico City and moved 24 years ago to the United States, where she met and married Jorge Aguilar, his brother said. She occasionally worked as a cashier at a supermarket, but her focus was taking care of her children, Javier Aguilar said.

“That was her goal in life, to make sure her three kids got the education that she never had,” he said. “So it’s a big loss for us that are here, and the other half that are back in Mexico.”

A GoFundMe he set up to cover the costs of her funeral and repatriation, and the family’s living expenses, had raised about $7,000 as of Wednesday evening.

Ms. Arriaga’s death recalled the recent killing of another mother of three: Priscilla Vasquez in the Bronx.

On Aug. 21 — a hot Friday night — Ms. Vasquez, 25, left her three children with a sitter and went out for the night. At 5:20 a.m. on Aug. 22, she was still socializing with friends outside an elementary school a block from the public housing building where she lived. 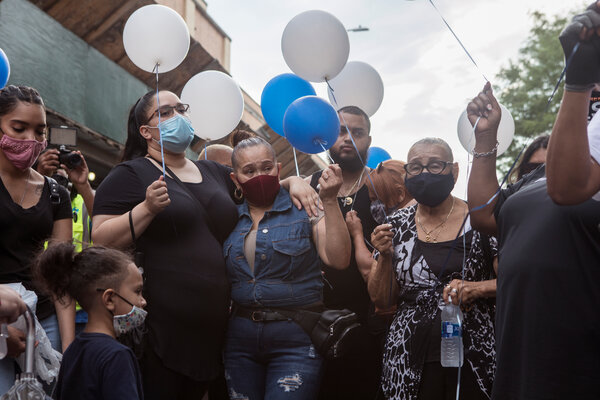 A man in a surgical mask arrived, pulled out a pistol and starting firing at someone near Ms. Vasquez, the police said. One of the bullets hit her in the back of the head, killing her. The man escaped in a car with Pennsylvania plates and has not been caught. The police have raised the amount of a reward twice, now to $10,000, asking for the public’s help.

Like most of the shootings this year, Ms. Vasquez’s death occurred in a pocket of the city that had been struggling with unemployment and violence well before the coronavirus pandemic made matters worse. Victims’ relatives have pleaded for the killing to end, but even vigils for the dead have become targets for shootings.

On a recent August evening, relatives of Ms. Vasquez made a sorrowful pilgrimage to the street where she was shot in the Melrose neighborhood of the Bronx.

Patria Moris, an aunt who had raised Ms. Vasquez after her mother died in a car crash, let out a cry and collapsed next to the altar decorated with candles, tributes and photos of a smiling Ms. Vasquez, her hair dyed blue and blond.

Ms. Vasquez was remembered as a caring mother of three young children. She had recently began a job cleaning for the city’s parks department, family and friends said.

“My sister was a loving and devoted person,” said a sister, Angela Moris, in an email. “Nothing tore her down. No matter how hard the times, she always kept working hard for her kids.”

“How many more do we have to lose?” he wondered aloud. “This is senseless. And it has to stop. We are killing each other for no reason.”