Shirley Abrahamson, an indefatigable jurist known for her activist voice and tart dissents who was the first woman on the Wisconsin Supreme Court and later its first female chief justice, died on Dec. 19 in Berkeley, Calif. She was 87.

Her son, Daniel, said the cause was pancreatic cancer.

Justice Abrahamson spent 43 years on the bench, 19 as the chief justice. She was long the only woman on the court, but when she retired in 2019 and moved to California, five of the seven justices were women. There are now six.

At Justice Abrahamson’s retirement ceremony, her friend Ruth Bader Ginsburg, the second woman to serve on the United States Supreme Court, said in a videotaped tribute, “As lawyer, law teacher and judge, she has inspired legions to follow in her way, to strive constantly to make the legal system genuinely equal and accessible to all who dwell in our fair land.”

In opinions, speeches and articles, Justice Abrahamson often wrote about the rights that state constitutions provide citizens — like protections against unreasonable searches and seizures — but the federal constitution does not.

“New federalism,” she wrote in the SMU Law Review in 1982, “describes the willingness of state courts to assert themselves as the final arbiters in questions of their citizens’ individual rights by relying on their own law, especially the state constitution.”

She was perhaps best known for her dissents, like the one in State v. Mitchell, a 1992 case in which the court ruled that the increased penalty a defendant could receive for a hate crime was unconstitutional. (The U.S. Supreme Court reversed the decision.)

“Bigots are free to think and express themselves as they wish, except that they may not engage in criminal conduct in furtherance of their beliefs,” Justice Abrahamson wrote. “The state’s interest in punishing bias-related criminal conduct relates only to the protection of equal rights and the prevention of crime, not to the suppression of free expression.”

She also opposed the court’s divided decision in 2015 to end the investigation into whether Gov. Scott Walker had illegally coordinated with conservative groups during the campaign to recall him three years earlier.

“Lest the length, convoluted analysis and overblown rhetoric of the majority opinion obscure its effect, let me state clearly,” Justice Abrahamson wrote. “The majority opinion adopts an unprecedented and faulty interpretation of Wisconsin’s campaign finance law and of the First Amendment.”

Justice Abrahamson had by then acquired a national reputation. In 1979, she was one of several female jurists considered by President Jimmy Carter as possible replacements for Supreme Court Justice William J. Brennan Jr. (who, as it turned out, stayed on the bench until 1990).

“She felt incredibly honored — and thought it was great fun — simply to have had her name floated as someone possibly under consideration,” Daniel Abrahamson said in an interview. “She expressed neither surprise nor regret at not getting the nod.”

Shirley Schlanger was born on Dec. 17, 1933, in Manhattan. Her father, Leo, and her mother, Ceilia (Sauerteig) Abrahamson, ran a grocery store.

At 6, Shirley declared her intention to be a lawyer. She would later say that having immigrant parents — they were both from Poland — taught her to believe that “this country was open” and that “no doors were closed.”

After graduating from Hunter College High School and New York University, she married Seymour Abrahamson and accompanied him to to Indiana University, Bloomington, where she got her law degree in 1956 and he earned a Ph.D. in genetics.

The couple then left for the University of Wisconsin, Madison, where she studied under the law school professor J. Willard Hurst, a pioneer in the field of legal history. She received a degree in legal history from the university’s law school in 1962 and was soon hired as the first woman lawyer at what was then known as La Follette, Sinykin, Doyle & Anderson, where she rose to be a name partner.

A legal generalist, she was best known as a tax lawyer. While working at the firm, she helped write the City of Madison’s equal-opportunity law and was director of the local chapter of the American Civil Liberties Union from 1967 to 1974. 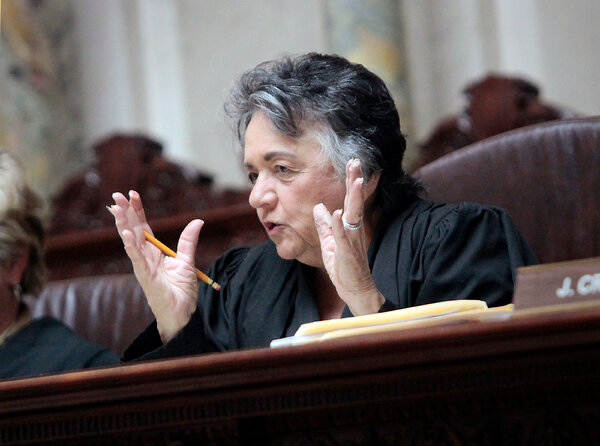 After her ceremonial swearing-in by William H. Rehnquist, the chief justice of the United States, she told the 1,200 people gathered at the state Capitol: “It is my prerogative as the state’s new chief justice to begin with a momentous announcement: The Green Bay Packers and Minnesota Vikings are tied. You’re going to be home in time for the second half.”

Justice Abrahamson helped make the court more accessible. During her tenure, it held its administrative meetings in public and she backed an educational program that brings high school students into the court to hear arguments.

Janine Geske, who served on the Wisconsin Supreme Court in the 1990s, recalled the erudition of Justice Abrahamson’s lengthy opinions (“each one of hers is a law school class”) and the excellence she demanded from her colleagues.

“When I first got to the court and circulated my first opinion,” Ms. Geske said in an interview, “I got a four-page, single-spaced memo telling me that it wasn’t strong enough. I remember gasping and feeling bad, but I learned that what she cared about was to strengthen an opinion even when she was on the defense. Some other justices didn’t accept that.”

Indeed, in 2015 the conservative majority on the court, with which she had been in increasing conflict, voted to replace her as chief justice with Patience Roggensack. They took this action after voters approved a constitutional amendment that ended the practice requiring the chief justice to be the most senior member by service.

“I publicly stated that I recommended the change because age does not necessarily mean brilliance or kindness,” William Callow, an opponent of Justice Abrahamson’s who served with her on the Wisconsin Supreme Court from 1977 to 1992, told The Capital Times in 2016.

Justice Abrahamson sued to block implementation of the amended law. A federal judge tossed out her lawsuit; she appealed but dropped the suit in late 2015, reasoning that pursuing it would take too long. She vowed to remain “independent, impartial, and nonpartisan, and help the court system improve.”

She retired a year after receiving her cancer diagnosis.

In addition to her son, she is survived by a grandson and a sister, Rosalind Sarlin. Her husband died in 2016.

Justice Abrahamson was known for the long hours she devoted to her work, which led her to eat at her desk, at speaking engagements and at restaurants with friends and colleagues. Her single-mindedness was noted by her husband, who spent time in Japan studying the effects of radiation on survivors of the United States’ detonation of atomic bombs on Hiroshima and Nagasaki.

“Whatever I leave for her in the refrigerator when I leave,” Professor Abrahamson, told The Associated Press in 1996. “is usually there when I get home seven months later.”