Cesar Barron reportedly dies from a heart attack in front of hundreds of fans during performance in Camden’s Roundhouse. 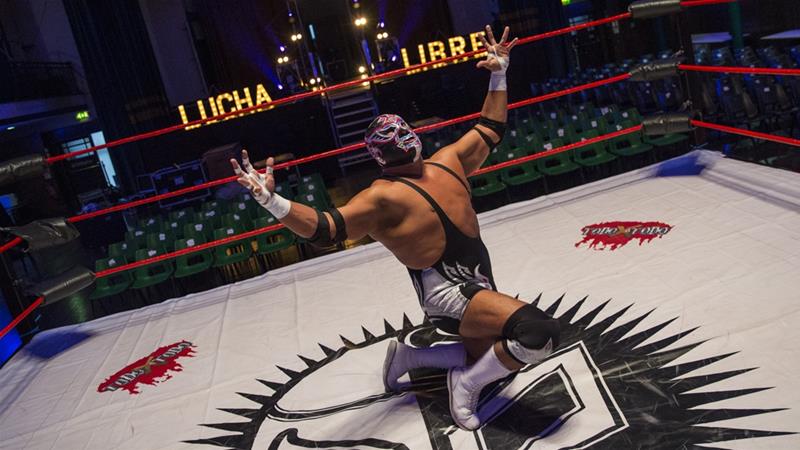 A World Championship Wrestling star has died in front of hundreds of fans after collapsing during a match in London on Saturday night.

Mexican national Cesar Gonzalez Barron, also known as Silver King, was fighting against Warrior Youth in The Greatest Show of Lucha Libre at the Roundhouse in Camden, London, when he died.

Lucha libre, or freestyle wrestling, is the term used in Mexico for professional wrestling. It is characterised by wrestlers wearing colourful masks and elaborate costumes while facing each other in choreographed battles.

The crowd and other wrestlers believed it was part of the show until people raced into the ring to his aid after he collapsed.

“They were wrestling and then something just seemed to go wrong,” a witness told The Sun.

“As they were wrestling it stopped and they seemed like they weren’t in sync at all, and the other wrestler started performing CPR,” the witness said.

“It was scary, they evacuated everyone but there didn’t seem to be an ambulance arrive for at least 20 minutes.”

The Round said there had been an “incident” at the show but the venue was unable to comment further.

Shocked to discover that not long after I shot this #SilverKing suffered a heart attack. #luchalibre #roundhouse #nacholibre #nirvana RIP

Shortly after, the official Lucha Libre Twitter account posted a picture of the wrestler captioned “Rest in Peace.”

“Lucha Libre AAA Worldwide joins the grief that the Luchistica family has for the death of Cesar Cuauhtemoc Gonzalez Barron ‘SILVER KING’.”

Barron, 51, was a star in his native Mexico and also appeared alongside the comic actor Jack Black in the 2005 film Nacho Libre.

Barron was raised in a Mexican wrestling family and his father, Dr Wagner, was a popular lucha libre fighter from the 60s. Silver King competed in World Championship Wrestling between 1997 and 2000.

Wrestling stars and fans paid tribute to Silver King as the news spread.

WWE is saddened to learn that Lucha Libre legend and former WCW star Silver King has passed away at age 51. https://t.co/mAge65OmeN

El Hijo del Santo (Son of the Saint), another famous Mexican wrestler also known as Jorge Rodriguez, expressed his “deep regret” at the death of his “partner in so many battles”.

Sin Cara (No Face) said the wrestler world was in mourning once more.

Tragic news breaking tonight that legendary luchador Silver King has passed away in the ring during a match with Juventud Guerrera. He was 51-years-old.