Gov. Kathy Hochul’s campaign says contributions from board and commission members and their families are fair game because she did not appoint them. 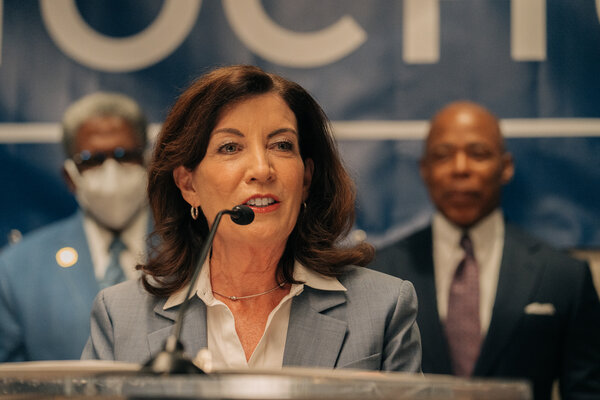 ALBANY, N.Y. — On the road to building one of the largest campaign war chests the state of New York has ever seen, Gov. Kathy Hochul has been taking money from appointees of the governor — despite an executive order designed to prevent it.

In her first year in office, Ms. Hochul has accepted more than $400,000 from appointees on boards from Buffalo to Battery Park City as well as the appointees’ spouses, a New York Times analysis of campaign finance data has found.

The fund-raising has occurred despite the longstanding executive order — reissued by Ms. Hochul on her first day in office — that prohibits such transactions in order to avoid even the appearance of rewarding donors with jobs in exchange for contributions.

Ms. Hochul’s campaign said it was appropriate to accept the contributions because they came from people appointed by her predecessor, Andrew M. Cuomo. The argument underscored a loophole in the ethics order that would seem to allow one governor to accept money from another governor’s board and commission appointees. In some cases, Ms. Hochul received donations from people Mr. Cuomo had appointed and then gave them new appointments.

A spokesman for Ms. Hochul’s campaign, Jerrel Harvey, said that Ms. Hochul had not accepted money from people she appointed and emphasized that all of her fund-raising had been aboveboard.

“We’ve been clear from the beginning of Governor Hochul’s term that people who are appointed by her are prevented from donating once they are appointed,” Mr. Harvey said. “We have followed that straightforward standard consistently and strictly.”

“It’s a silly argument to say if I appointed you then you can’t contribute to me, but if my predecessor appointed you, then I can hit you up for donations,” said Bruce Green, a professor at Fordham University Law School and a former member of the New York City Conflicts of Interest Board. “Going forward, presumably, they’re both going to want to be reappointed.”

The donations that Ms. Hochul accepted from appointees represent just a small portion of her campaign’s huge haul ahead of the election in November. She has already raised some $35 million and set a goal of raising as much as twice that amount, people familiar with her plans said. Doing so would put the 2022 governor’s race at or near the most expensive in state history.

Ms. Hochul, a Democrat who was sworn in as governor after Mr. Cuomo resigned amid a scandal last year, easily defeated two primary rivals this summer and is heavily favored to win against Representative Lee Zeldin, a Republican, in the fall.

Although she has promised a clean break from the ways of her predecessor, Ms. Hochul’s willingness to raise money from appointees runs counter to that pledge. Mr. Cuomo was known for taking a hawkish approach to soliciting donations from the people he appointed, raising ethics concerns.

Ms. Hochul’s campaign has not shrunk from accepting donations from Mr. Cuomo’s appointees, receiving more than $250,000 from them, records show.

She got more than $56,000 from the real estate developer Don Capoccia, whom Mr. Cuomo appointed to the Battery Park City Authority in 2011 and who did not respond to requests for comment.

She accepted more than $90,000 between October and May from a trial lawyer, Joe Belluck, who was chosen by Mr. Cuomo for two statewide panels, and his wife. Ms. Hochul appointed Mr. Belluck to the state’s new Cannabis Advisory Board in June.