A couple who were filmed pointing guns at protesters in St Louis as the activists marched outside their mansion say they were “in fear of their lives” from an “angry mob”.

The demonstrators were demanding the city’s mayor resign after revealing the personal details of several residents who had called for police defunding.

Videos from the Missouri protest, which have circulated widely on social media, showed 63-year-old Mark McCloskey brandishing a semi-automatic rifle while his wife Patricia, 61, was armed with a pistol.

In the footage, the couple, both barefoot, were seen shouting at protesters outside their Renaissance palazzo-style home. 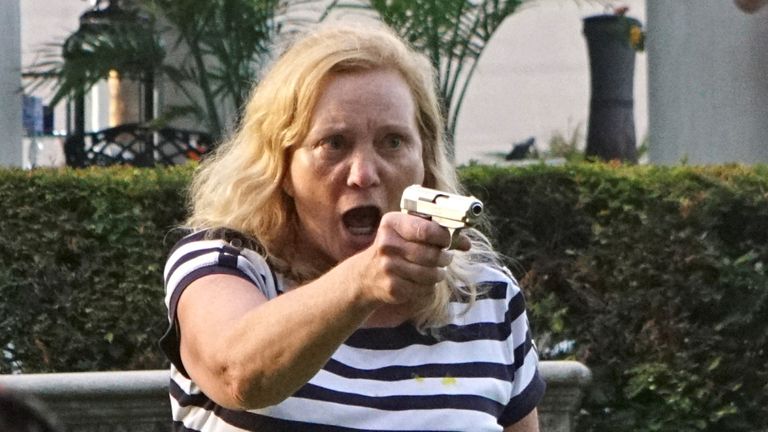 Mr McCloskey told KMOV-TV that he and his partner, both personal injury lawyers, were facing an “angry mob” on their private street on Sunday night.

He claimed protesters rushed towards the home as the family was having dinner and “put us in fear of our lives”.

He said: “This is all private property. There are no public sidewalks or public streets. We were told that we would be killed, our home burned and our dog killed. We were all alone facing an angry mob.”

Police said the couple had heard a loud commotion in the street and saw a large group of people break an iron gate marked with “no trespassing” and “private street” signs.

The crowd of at least 500 people included black and white protesters. Some in the crowd tried to move the group on as demonstrators chanted “let’s go”.

St Louis Metropolitan Police confirmed in a statement they were investigating the alleged “assault and trespassing” incident in the Central West End neighbourhood.

It said officers responded to a “call for help” at a block on Portland Place. 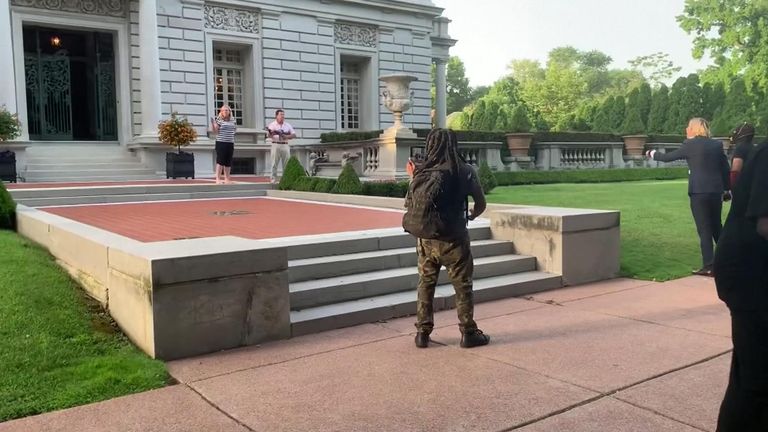 “The victims stated they were on their property when they heard a loud commotion coming from the street.

“When the victims went to investigate the commotion, they observed a large group of subjects forcefully break an iron gate marked with ‘no trespassing’ and ‘private street’ signs,” the statement read.

“Once through the gate, the victims advised the group that they were on a private street and trespassing and told them to leave. The group began yelling obscenities and threats of harm to both victims.

“When the victims observed multiple subjects who were armed, they then armed themselves and contacted police. The investigation is ongoing.”

No charges have been brought. 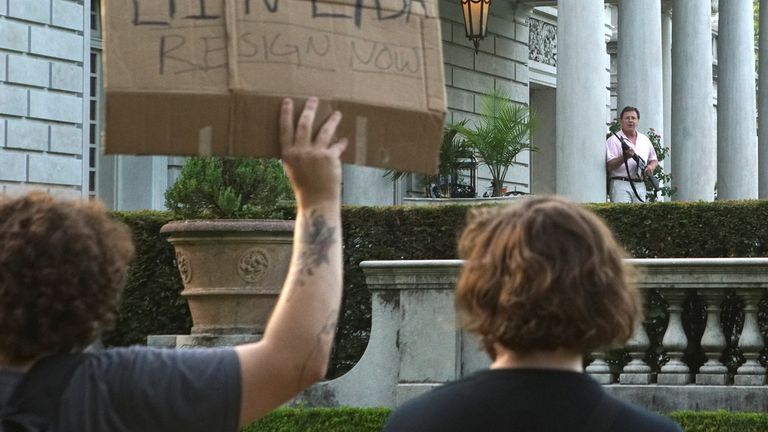 The group was heading towards mayor Lyda Krewson’s home, chanting, “Resign Lyda, take the cops with you,” US media reported.

The resignation demands had stemmed from a Facebook live briefing on Friday in which Ms Krewson read the names and addresses of several residents who wrote her letters suggesting she defund the police department.

The names and letters are considered public records but Ms Krewson’s actions led to a strong backlash.

Speaking through a megaphone at the protest on Sunday, Missouri State Representative Rasheen Aldridge said that as a leader “you don’t do stuff like that”.

“It’s only right that we visit her at her home,” he said. Protesters nationwide have been pushing to “defund the police” following the death of George Floyd and other black people killed by law enforcement officers.

Ms Krewson was elected as St Louis’ first female mayor in 2017 by pledging to work to reduce crime and improve impoverished neighbourhoods.

An online petition calling for Ms Krewson’s resignation has had more than 43,000 signatures.