ATLANTA — Stacey Abrams, who galvanized Georgia Democrats in her quest to become the first black woman to be elected governor anywhere in the United States, ended her campaign to lead this state on Friday.

Ms. Abrams, who sharply criticized what she saw as an “erosion of democracy” in Georgia, said she would not concede the race to her Republican rival, Brian Kemp, but she acknowledged that he would become governor.

She said she saw no legal path to overturn the results. “The law currently allows no further viable remedy,” she said.

“Let’s be clear: This is not a speech of concession because concession means to acknowledge an action is right, true or proper,” Ms. Abrams said amid a blistering attack on Mr. Kemp’s record as the state’s chief elections regulator and on the balloting process in Georgia. “As a woman of conscience and faith, I cannot concede that.”

Ms. Abrams made her announcement as the state became eligible to certify the election results, and it left Mr. Kemp, whose brash allegiance to hard-line conservatism made him an object of national fascination and scorn, poised to become governor in January.

As Ms. Abrams ended her campaign, she returned to a theme that had surfaced throughout: that Mr. Kemp, who was the Georgia secretary of state until the Thursday after the election, had used his position to suppress voting and ease his path into the governor’s mansion.

The close outcome — with Mr. Kemp avoiding a runoff by about 18,000 votes out of the nearly four million that were cast — only fanned the complaints, with Democrats questioning his integrity and management of the balloting, and federal judges ordering changes to some counting procedures and plans.

Mr. Kemp’s victory allowed the Republican Party to maintain its grip on power in Georgia, which has not elected a Democrat as governor since 1998.

And the defeat was a setback for Georgia Democrats, who saw Ms. Abrams, their former leader in the State House of Representatives, as their most formidable candidate for statewide office in years. She received more than 1.9 million votes — more than Barack Obama got in Georgia during either of his campaigns for the presidency.

Ms. Abrams capitalized on the state’s shifting demographics and assembled a broad coalition that was eager to deliver a rebuke to President Trump. But vote tallies suggested that Republicans were able to leverage the state’s conservative bent just enough to hold off the challenge.

[Here’s Why Election Day Has Turned Into Election Week and a Half.]

Mr. Kemp declared victory two days after the election and appointed a chief of staff for his transition. He also resigned as secretary of state, ending his oversight of the elections. Many Democrats, and even some Republicans, thought the decision came too late.

When he appeared at the State Capitol last week, he asserted that he had won “a clear and convincing victory” and pledged to “put hard-working Georgians ahead of politics.” His campaign aides spent much of this week attacking Democratic efforts in court, while Ms. Abrams picked up a series of important, if not ultimately pivotal, legal victories.

The outcome was the tightest for Georgia governor since 1966, when no candidate secured a majority and the decision fell to the Legislature, which chose the segregationist Lester Maddox. 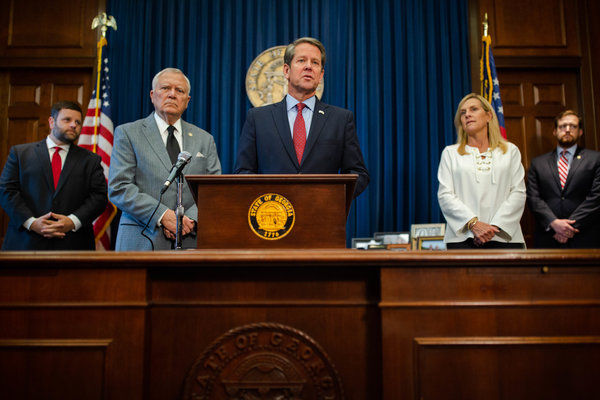 The race presented residents with starkly different personalities, policies and visions for the nation’s eighth-most populous state. In turn, the contest drew enormous attention and money, with more than $65 million in spending, including the primaries, and about 2.1 million early votes, easily breaking state records.

Mr. Kemp, 55, vowed to cut regulations and crack down on undocumented immigrants. He captured the Republican nomination in a July runoff, bolstered by Mr. Trump’s support and by provocative television ads in which he brandished a shotgun at a teenager (to underscore his support for gun rights) and promised to round up “criminal illegals” in his pickup truck.

His proposals, though sometimes vague, thrilled conservatives: a “Track and Deport” plan that would “create a comprehensive database to track criminal aliens in Georgia”; new limits on the state’s budget, sustaining the government’s efforts to lure major economic projects; and an intensified focus on stopping gang activity.

He had not been the Republican establishment’s first choice — the retiring Republican governor, Nathan Deal, endorsed one of Mr. Kemp’s primary rivals before eventually offering his full-throated backing — and his hard-right tone sent waves of concern through the Georgia business community, which wields enormous influence.

Mr. Kemp has cut a very different figure than Mr. Deal, a soft-spoken former Democrat. In Mr. Kemp, the Republican-dominated General Assembly may have found a more willing partner after years of sporadic sparring with Mr. Deal. Mr. Kemp has pledged to support a religious liberty bill of the kind that Mr. Deal vetoed, but he has also signaled, in a shift from his approach during the primary, that he would cooperate with the explicit interests of major Georgia companies, including Delta Air Lines, which clashed with lawmakers this year over a tax break.

In the tense and testy closing weeks of the race, just about all that Georgia’s Democrats and Republicans could agree on — besides desperately wanting the campaign to be over — was that Ms. Abrams would have carried a vastly different agenda into the governor’s office.

Though she seemed most comfortable talking policy, her allies emphasized her place in the broader context of Southern history. In a campaign appearance, the television personality Oprah Winfrey spoke of the indignities suffered by nonwhite Georgians in the days of Jim Crow, saying that failing to vote now would be “disrespecting and disregarding” those ancestors.

And Democrats invested enormous hopes in Ms. Abrams’s candidacy, betting that she would allow the party to rebound from a string of defeats in Georgia. If her loss stands, it will force the party to yet another reckoning over how to compete in Georgia, particularly because Mr. Kemp will be governor when the General Assembly redraws district lines after the 2020 census.

Each side in the race tried to paint the other as extremist. Mr. Trump called Ms. Abrams “one of the most extreme far-left politicians in the entire country” and said she would “have Georgia turn into Venezuela.” Democrats said Mr. Kemp’s shotgun ad showed him to be “reckless” and “irresponsible.”

But the issue that seemed to electrify voters most in the final weeks was voting access, a particularly sensitive matter because Mr. Kemp was still overseeing elections.

Two days before the election, Mr. Kemp’s office announced, citing scant evidence, that it was opening an inquiry into the state Democratic Party after what the office called “a failed attempt to hack the state’s voter registration system.” Democrats denied any wrongdoing and called the announcement a political stunt.

By then, Mr. Kemp had already faced bruising criticism over voting issues in the state. His detractors said he spent years making it harder for minorities and poor people to register and vote; he countered by arguing that his policies protected the integrity of the rolls and the elections.

But his record still gave Ms. Abrams’s campaign a rallying cry even after the polls closed: “Count every vote,” her campaign manager repeatedly told the television cameras, asserting that it was not yet time for Ms. Abrams to concede.

On Friday evening in Atlanta, Ms. Abrams held true to that.

“I don’t want to hold public office if I have to scheme my way into the post because the title of governor isn’t nearly as important as our shared title — voters,” she said. “And that is why we fight on.”