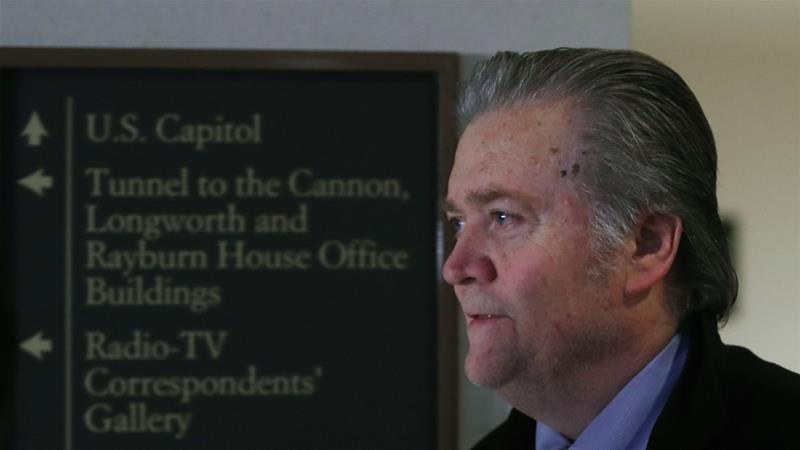 US President Donald Trump’s former chief strategist Steve Bannon has been questioned by investigators examining alleged Russian meddling into the 2016 US elections.

Bannon, who left his position last August, was interviewed by Special Counsel Robert Mueller behind closed doors on Thursday for at least the second time this week, according to local media reports.

Mueller’s team is probing whether Trump’s presidential campaign colluded with Russia in its bid to influence the 2016 US presidential election.

“Bannon was questioned for a long period of time by members of the Special Counsel Robert Mueller’s team on at least two occasions,” Al Jazeera’s Mike Hana, reporting from Washington, DC, said.

“The questioning lasted some 20 hours, but the nature of the questions are not yet known,” he added.

Bannon also appeared for the second time before a congressional panel probing the same issue earlier on Thursday.

Like his first appearance in January, Bannon was reported to have cited “White House privilege”, while refusing to answer a large number of questions by the House of Representatives Intelligence Committee.

Frustrated Democrats slammed Bannon, saying that his refusal to answer questions should be considered contempt.

“There was a refusal to answer any questions that would have brought out the full facts,” said Adam Schiff, the Democratic leader of the panel said. “That is not how privledge works. That’s how stonewalling works,” he added.

Al Jazeera’s Hana said that “unlike Bannon’s appearance before the Intelligence Committee, we do understand that he did give answers to all the questions that were put to him by Mueller’s team”.

The probe began in May 2017 to investigate any links or coordination between the Russian government and individuals associated with the Trump campaign.

In December, Michael Flynn, the former US national security adviser, became the fourth known person connected to the Trump campaign to be charged in connection to the investigation on possible Russian meddling.

He pleaded guilty to making false statements in relation to his conversatin with the Russian ambassador before Trump took office.