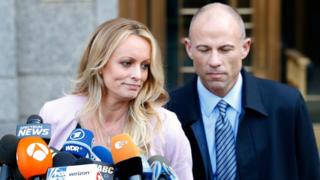 But her lawyers said she was not involved in the alleged incident, BuzzFeed News website reports.

Mr Avenatti is yet to make public comments on the issue.

We can confirm that today LAPD Detectives arrested Michael Avenatti on suspicion of domestic violence. This is an ongoing investigation and we will provide more details as they become available.

The pair married in 2011, but Mr Avenatti reportedly filed for divorce in 2017.

Ms Daniels, an actor and director, alleges she and President Trump had a brief relationship – a claim he denies – and has sought to free herself from a non-disclosure agreement she signed before the 2016 election.

A frequent guest on TV talk shows and news programmes, Mr Avenatti has emerged as a fierce critic of President Trump, the BBC’s David Willis in Los Angeles says.

At one point Mr Avenatti was publicly contemplating running for president himself in 2020, our correspondent adds.