Since even before he officially entered the New York City mayoral contest, Andrew Yang has attracted more criticism from his rivals than any other contender in the sprawling field, a reflection of both missteps he has made and, as the race has unfolded, his standing as the leading candidate.

Last week, the criticisms became even sharper, signaling the beginning of a more intense phase of the campaign.

Here are the race’s latest developments:

Part of Mr. Yang’s appeal to his supporters is his willingness to shed the conventions of political caution and speak frankly — a trait that sometimes gets him in trouble.

The most recent example came last week, when Mr. Yang, in an interview with Politico, criticized the United Federation of Teachers, suggesting that the union was “a significant reason why our schools have been slow” to open amid the pandemic.

The remarks drew pointed criticism from Scott M. Stringer, the city comptroller, and Eric Adams, the Brooklyn borough president, as well as more muted criticism from other candidates, as they defended the work teachers have done under challenging circumstances. They are all also aware that the union’s coveted endorsement is still up for grabs.

Mr. Stringer — who trails Mr. Yang and Mr. Adams in the little public polling available — laced into Mr. Yang in perhaps his most direct and sustained attack to date, seeking to cast his rival as an unserious candidate at a moment of significant challenges for the city — and appearing to make a barely veiled comparison to former President Donald J. Trump.

“Whether it’s an illegal casino on Governors Island, housing for TikTok stars or being baffled by parents who live and work in two-bedroom apartments, kids in virtual school, we don’t need another leader who tweets first and thinks later,” he said in a Friday morning speech. He also noted that Mr. Yang had spent much of the pandemic outside the city before deciding to run for mayor.

Mr. Stringer, Mr. Adams and Raymond J. McGuire, a former Citi executive, have also been critical of the details around Mr. Yang’s proposal for basic income — and on Twitter, exchanges between strategists for Mr. Yang and Mr. Stringer in particular have become even more contentious.

“Andrew Yang is going to keep talking to New Yorkers about his plans to get the city safely reopen and people back to work as fast as we can,” said Chris Coffey, Mr. Yang’s co-campaign manager, about the mounting attacks. “We’ll leave the tired, 1990s negative campaigning to others.”

Candidates reluctant to decriminalize all drugs

This year, Oregon became the first state in the nation to decriminalize the possession of small amounts of all drugs. If the next mayor of New York City has his or her way, the city may finally open sites to allow for the safer injection of drugs. But based on responses at a recent forum, mayoral candidates do not favor following Oregon’s lead on full-scale decriminalization.

“I do have concerns about the devastation I’ve seen with highly, highly addictive and deadly drugs, where even small amounts can have life-altering consequences and even cause death,” said Shaun Donovan, a former cabinet member in the Obama administration, citing fentanyl as an example.

Kathryn Garcia, the city’s former sanitation commissioner, echoed Mr. Donovan’s concerns and expressed particular unease with cocaine, saying, “Back in the day, when it was super- popular in the ’80s, we had young basketball players who died of heart attacks after their first use.”

Maya Wiley, the former counsel to Mayor Bill de Blasio, avoided directly addressing the issue. Mr. Adams was forthright in his opposition, though he said he supports legalizing marijuana.

“You guys know I’m ex-po-po,” said Mr. Adams, the former head of 100 Blacks in Law Enforcement Who Care, using an expression to describe a police officer.

The candidates’ responses seemed to elicit some frustration from one of the moderators, Alyssa Aguilera, co-executive director of VOCAL-NY, which hosted the forum.

“Drugs have always been illegal, and the devastation and the overdoses are continuing to happen,” she said. “Clearly 40 years of that hasn’t worked, and we’re hopeful that the next mayor will take a different approach.”

The only candidates to offer more support for the idea were Mr. Yang — who favors the legalization of psilocybin mushrooms — and Dianne Morales, a former nonprofit executive running to the far left in the Democratic primary.

“We need to move towards that, in response to the war on drugs,” Ms. Morales said, referring to the decriminalization of all personal drug possession. 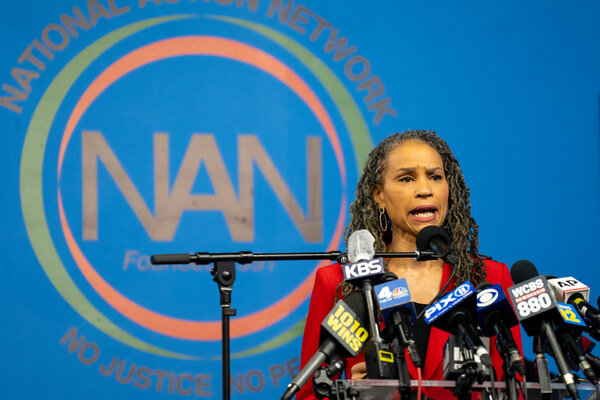 The latest campaign filing revealed that Ms. Wiley has many friends in Hollywood.

The former MSNBC analyst received donations recently from the director Steven Spielberg; Norman Lear, the creator of the television show “All in the Family”; Alan Horn, the former head of Walt Disney Studios; and Christopher Guest, the director of beloved mockumentaries like “Best in Show.”

Mr. Yang received a $2,000 donation from Jessica Seinfeld, wife of the comedian Jerry Seinfeld, and had support from two snack magnates: Siggi Hilmarsson, the founder of Siggi’s yogurt, and Daniel Lubetzky, the founder of KIND bars.

Several candidates in the Democratic field have pledged not to take money from the real estate industry, but Mr. Adams is not one of them. He received donations from Brett Herschenfeld and Harrison Sitomer, two leaders of SL Green, the powerful commercial real estate company. A PAC affiliated with Madison Square Garden also donated $2,000 to his campaign.

In the Republican field, Sara Tirschwell, a former Wall Street executive, has raised about $320,000, while Fernando Mateo, a restaurant operator, raised nearly $200,000. They are far behind the Democratic candidates.

Donovan vs. The Wall Street Journal

Every election cycle, candidates perform the campaign ritual of visiting prominent newspapers’ editorial boards to discuss their ideas. The meetings are normally closed-door affairs, but Mr. Donovan has made his interview with The Wall Street Journal’s editorial board a public part of his campaign.

Mr. Donovan’s campaign distributed a news release and video of his remarks to The Journal, criticizing the editorial board for “turning a blind eye to the racist and un-American” remarks by Mr. Trump that he suggested may have contributed to the shootings in Atlanta where eight people, including six women of Asian descent, were killed.

The board, Mr. Donovan said, had shown a “willful disregard” for Mr. Trump’s “racist and hateful remarks about immigrants, about Asian-Americans, calling this virus the ‘Kung Flu,’ and the contribution that has to the hate crimes we have seen, even yesterday in Atlanta.”

Mr. Donovan, speaking out against violence against Asian-Americans at the headquarters of the National Action Network in Harlem last week, mentioned his visit to The Journal’s editorial board and his criticism of how the board had normalized Mr. Trump’s racist remarks.

“We need to stop explaining away the hate behind these crimes, these crimes that we’re living with because of what we’ve seen in the White House and across the country these last four years, and call them what they really are, acts of terror,” Mr. Donovan said.

The board had been critical of Mr. Trump around immigration and his response to a white nationalist rally in Charlottesville, Va., in 2017 where Heather D. Heyer, 32, was killed after a car plowed into a crowd of counterprotesters, he said.

The story behind Yang’s omnipresent scarf

Mr. McGuire is a proud self-described “sneakerhead” who can sometimes be spotted in red-soled Air Jordans — the 11 Retro (Bred) edition that can retail for a few hundred dollars.

But few candidates seem as attached to any item of clothing as Mr. Yang is to his scarves — a gift from his wife, Evelyn.

The three identical orange and blue Paul Smith scarves, which she bought on sale for $95 each from countryattire.us (a store she found via Google), evoke the colors of both the New York Mets and New York City’s flag.

The scarf has fast become Mr. Yang’s signature fashion accessory, along with a black mask emblazoned with “Yang for New York” in white letters across the mouth.

Ms. Yang wanted Mr. Yang to have a “splash of color,” he said, one that was “going to be identifiable and preferably somewhat New York-related.”