LOS ANGELES — Federal authorities said on Monday that they had thwarted a domestic terror plot by an American military veteran aimed at “multiple targets” in Southern California, including Huntington Beach, the port of Long Beach and the Santa Monica Pier.

The suspect, who was identified as Mark Steven Domingo, was seeking retribution for the recent attacks on mosques in New Zealand, according to the authorities. He spoke of unleashing an attack similar to the massacre in Las Vegas, aiming to kill hundreds of people and was especially targeting white nationalists, Jews, churches and military bases, according to court documents filed Monday.

The suspect was arrested Friday night after he received what he thought was a live bomb, but in fact was an inert explosive device that was delivered by an undercover law enforcement officer as part of an investigation by the F.B.I.’s Joint Terrorism Task Force.

Here is the criminal complaint in the case of the United States v. Mark Domingo, filed by prosecutors April 27, 2019. 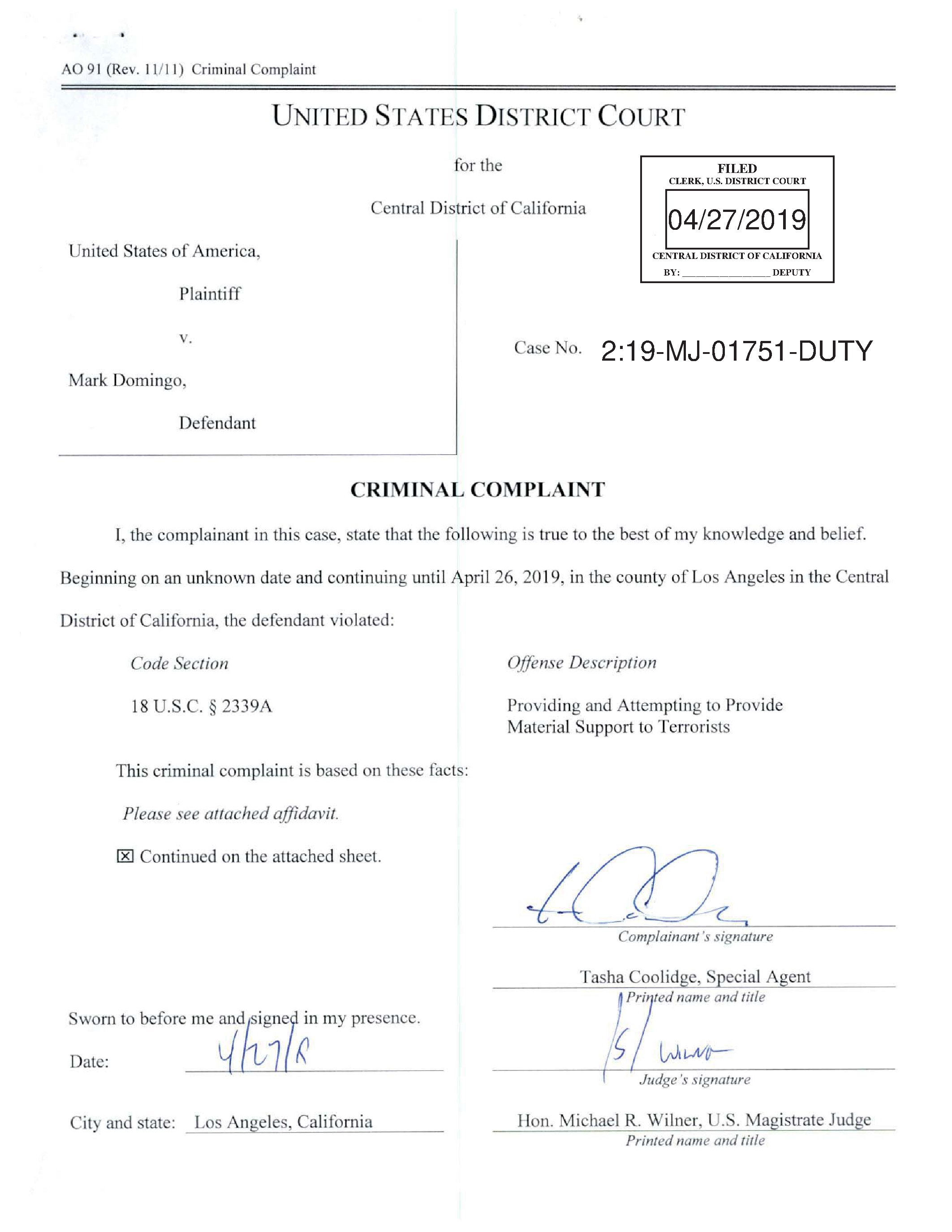 He has been charged with providing and attempting to provide material support to terrorists. Mr. Domingo, 26, of Reseda, “planned and took steps to manufacture and use a weapon of mass destruction order to commit mass murder,” according to the criminal complaint filed Monday.

Last week, Mr. Domingo “purchased several hundred nails” meant to be used as shrapnel inside an explosive device, the complaint said. The person Mr. Domingo believed was a collaborator was an undercover law enforcement officer.

Mr. Domingo was previously an active duty Army infantryman who had been deployed to Afghanistan from September 2012 to January 2013. Officials said they reviewed many online posts in which Mr. Domingo voiced his enthusiastic support for “violent jihad” and his desire to attack the Los Angeles area.

On March 3, Mr. Domingo posted “America needs another Vegas event,” a reference to the massacre in 2017, “something to kick off civil unrest.” Later that month he posted “there must be retribution” for the attacks on mosques in Christchurch, New Zealand.

The arrest comes just two days after a shooting at a syngagoue in the San Diego area that killed one woman and wounded three others, leaving many on edge and wary of copycat attacks.

Mr. Domingo had three firearms registered to him, including two semiautomatic firearms and a bolt-action rifle, according to law enforcement. He was a recent convert to Islam, the complaint said, and expressed support for the activities of the Islamic State.

Over several weeks the informant met with Mr. Domingo and discussed his detailed plans to carry out an attack.

“This investigation successfully disrupted a very real threat posed by a trained combat soldier who repeatedly stated he wanted to cause the maximum number of casualties,” said the United States attorney for the Central District of California, Nick Hanna. “Protecting Americans from terror attacks is the No. 1 priority of the Justice Department, and anyone who plots to use a weapon of mass destruction will be held to account.”