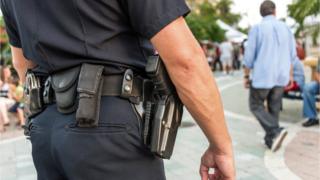 A Texas police officer has shot his son, mistaking him for an intruder, a police spokesperson said.

The gunfire rang out at the officer’s home in the Dallas suburb of Desoto on Saturday evening.

The police have not filed any charges and have ruled out foul play. “It was an accident,” said DeSoto Police spokesperson Pete Schulte.

The son, in his 20s, suffered a non-life threatening injury to his forearm, said Mr Schulte.

The police spokesperson said the off-duty officer returned home on Saturday evening and realised it wasn’t in the state that he had left it. He was also unaware that his son was at home.

“The DeSoto Police Department has treated this like every other case that we would have had and we would’ve handled it the exact same way,” said Mr Schulte.

The police have not released the name of the officer and his son.

This follows the recent police shooting of Atatiana Jefferson, a 28-year-old woman in Texas, who was killed at her home while she was playing video games with her nephew.

Police reportedly arrived at her home after a neighbour called a non-emergency number, stating that Jefferson’s front door was open.

The officer is facing a murder charge in that case.