The 2020 hurricane season, which brought destructive storms from Central America to the Gulf Coast of the United States and beyond, has proved to be one for the record books.

The storms began before the hurricane season officially kicked off, with the formation of Tropical Storm Albert in mid-May, two weeks before the official start of the Atlantic season on June 1.

In August, midway through the six-month season, scientists upgraded their outlook to say 2020 would be “one of the most active seasons,” and said they expected up to 25 named storms by the time it was over. By November, even that upgraded expectation was exceeded: There have now been 30 named storms — 13 of them hurricanes — breaking a record set in 2005, when 28 storms grew strong enough to be named. Fifteen that year became hurricanes.

The latest storm, Hurricane Iota, was swirling toward Central America, a region still recovering after a hit from Hurricane Eta two weeks ago. Iota, on Monday as strong as a Category 5 hurricane, was expected to make landfall on the border of Nicaragua and Honduras on Monday night and was forecast to produce catastrophic winds and dump up to 30 inches of rain in the area all week.

There have been a record-breaking number of named storms. 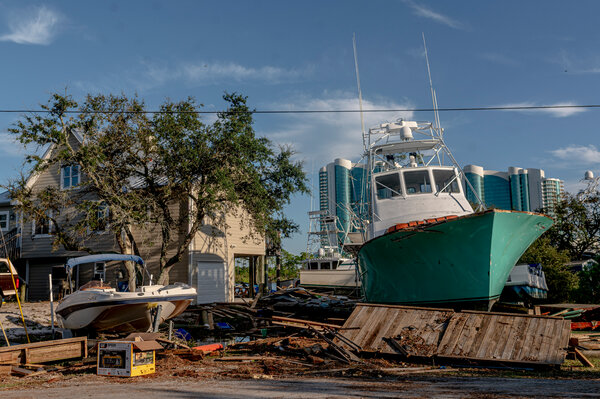 In September, when Tropical Storm Wilfred formed in the eastern Atlantic Ocean, it exhausted the list of prepared storm names and pushed meteorologists to the 24-letter Greek alphabet to name the next storms, only the second time meteorologists resorted to Greek letters. “We’ve only done it once,” Dennis Feltgen, a spokesman and meteorologist with the National Hurricane Center in Miami, said earlier in the season, “and that was 2005.”

Six of those hurricanes have been major storms.

According to Saffir-Simpson Hurricane Wind Scale, a major hurricane, Category 3 or higher, has winds beginning at 111 miles per hour. There have been six major hurricanes this season including, Laura, Teddy, Delta, Epsilon, Eta and Iota.

The strongest was Hurricane Iota, which grew to a Category 5 storm with maximum sustained winds of 160 miles per hour, according to the National Hurricane Center in Miami.

Which areas have been hit the most and the hardest?

While Central America braced for Iota, its second major hurricane of the season, it was still recovering from the destruction left by Eta, a storm that made landfall in early November as a Category 4 and claimed at least 60 lives.

The Gulf Coast of the United States was also battered this season by seven named storms. Eta thrashed Florida twice, leaving tens of thousands without electricity and flooding beach communities.

Louisiana saw at least five storms this year, including Zeta, which in late October pulverized parts of New Orleans. In August, Hurricane Laura made landfall on the state’s coast as a Category 4 storm with 150-mile-per-hour winds, destroying office buildings, a sky bridge, trees and power lines. The storm was also responsible for at least six deaths in the state.

How has climate change affected hurricanes?

The busy hurricane season has raised repeated questions about how exactly climate change is affecting hurricanes in the Atlantic. While researchers aren’t able to say for certain that climate change will mean longer or more active hurricane seasons in the years to come, they do believe that global warming is changing storms.

And research on the topic is ongoing.

Scientists have found that climate change affects how hurricanes form and strengthen; rising ocean temperatures linked to global warming can cause storms to weaken more slowly after they move onto land and remain destructive for longer. In a recent study, scientists found that 50 years ago a typical storm would have lost more than three-quarters of its intensity in the first 24 hours, when it might travel several hundred miles inland, but now it would lose only about half.