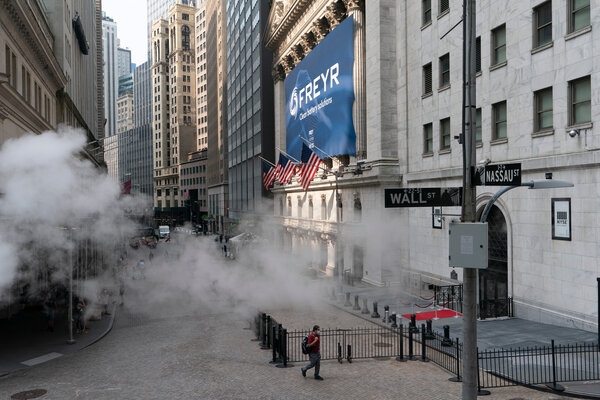 For months, the United States has been experiencing the growing pains of an economy rebooting itself — surging economic activity, yes, but also shortages, gummed-up supply networks and higher prices.

Now, shifts in financial markets point to a reversal of that economic narrative. Specifically, the bond market has swung in ways that suggest that a period of slower growth and more subdued inflation could lie ahead.

The yield on 10-year Treasury bonds fell to 1.29 percent on Thursday, down from a recent high of 1.75 percent at the end of March and the fourth straight trading day of decline. The closing price of inflation-protected bonds implied expectations of consumer price inflation at 2.25 percent a year over the coming decade, down from 2.54 percent in early May.

These are hardly panic-worthy numbers. They are not the kind of jaw-dropping swings that markets show in moments of extreme turbulence, and analysts attribute the moves in significant part to technical factors as big investors shift their portfolios.

Moreover, there is a reasonable argument that the economy will be better over the medium term if it experiences moderate growth and low inflation, as opposed to the kind of breakneck growth — paired with shortages and inflation — seen in the last few months.

But the price swings do show an economy in flux, and they undermine arguments that the United States is settling into a new, high-inflation reality for the indefinite future.

In effect, the bet in markets on explosive growth and resulting inflation is giving way to a more mixed story. The economy remains hot at the moment; the quarter that just ended will most likely turn out to be one of the strongest for growth in history. But market prices aim to reflect the future, not the present, and the future is looking less buoyant than it did not long ago.

The peak months for injection of federal stimulus dollars into the economy have passed. The legislative outlook for major federal initiatives on infrastructure and family support has become murkier. The rapid spread of the Delta variant of Covid-19 has brought new concern for the global economic outlook, especially in places with low vaccination rates. That, in turn, could both hold back demand for American exports and cause continued supply problems that result in slower growth in the United States.

“The overriding concern being reflected in the bond market is that peak growth has been reached, and the benefits from fiscal policy are starting to fade,” said Sophie Griffiths, a market analyst with the foreign exchange brokerage Oanda, in a research note.

The evidence of a more measured growth path was evident, for example, in a report from the Institute for Supply Management this week. It showed the service sector was continuing to expand rapidly in June, but considerably less rapidly than it had in May. Anecdotes included in the report supported the idea that supply problems were holding back the pace of expansion.

“Business conditions continue to rebound; however, like everywhere, the challenges in the supply chain are numerous,” reported one anonymous retailer that participated in the I.S.M. survey. “We continue to see cost increases, delayed shipments, pushed-out lead times, and no clarity as to when predictive balance returns to this market.”

The bond market shifts could leave the Federal Reserve wrong-footed in contemplating plans to unwind its efforts to support the economy. At a policy meeting three weeks ago, some Fed officials were ready to proceed with tapering bond purchases in the near future, and some expected to raise interest rates next year, in contrast with a more patient approach that Jerome Powell, the Fed chairman, has advocated.

In one of the odder paradoxes of monetary policy, what was perceived in markets as greater openness at the Fed to raising interest rates has contributed to declines in long-term interest rates. Global investors are betting that potential pre-emptive monetary tightening will cause a stronger dollar, slower growth and less ability for the Fed to raise rates in the future without tanking the economy.

“The market read the views of the minority within the Fed about tapering and about raising rates as signals the Fed has blinked on its decision to allow the economy to run hot,” said Steven Ricchiuto, chief U.S. economist at Mizuho Securities. “A weaker global economy and stronger U.S. dollar all imply greater potential for us to import global deflation.”

There are silver linings to the reassessment taking place in markets. Lower long-term rates make borrowing cheaper for Americans — whether that is Congress and the Biden administration considering how to pay for infrastructure plans, or home buyers trying to afford a house.

And the adjustment in bond prices can give Fed officials more confidence that inflation is set to be consistent with their goals in the years ahead, even as businesses face supply shortages and spiking wages at the moment.

For example, bond prices now imply that inflation will be 2.1 percent per year between five and 10 years from now, down from expectations of 2.4 percent in early May. The Fed aims for 2 percent inflation (though targeting a different inflation measure from the one that is used in the value of inflation-protected bonds).

That could make it less likely the Fed acts prematurely out of fear that inflation will get out of control, recent communication problems notwithstanding.

Markets aren’t all-knowing, and the signals being sent by bond prices could turn out to be wrong. But investors with, collectively, trillions of dollars on the line are betting that the rip-roaring economy of summer 2021 is going to give way to something a good bit less exciting.