As old as the Capitol itself, the Capitol Police began in 1801 with the appointment of a single guard to oversee the move of Congress from Philadelphia to Washington, D.C. His task, according to a court filing, was to “take as much care as possible with the property of the United States.”

Over the years, the force — whose positions were once filled entirely through patronage — was professionalized and expanded, usually in the aftermath of crises like the shooting of five lawmakers by Puerto Rican nationalists in 1954, the killing by a gunman of two officers inside an entrance to the building in 1998, or the terrorist attacks of Sept. 11, 2001.

Today, it is in crisis once again, with calls for a full investigation into what lawmakers have called a “severe systemic failure” that allowed an angry mob of Trump loyalists to storm the Capitol last week, an episode that left five people dead, including one Capitol Police officer.

Three officers have been suspended and 17 more are under investigation, according to a senior Congressional aide.

The department is accustomed to being shielded from the type of public disclosure that is routine for ordinary police agencies. But since last week’s rampage, the department’s chief and two other top security officials have resigned, and its Congressional overseers have pressed for answers. 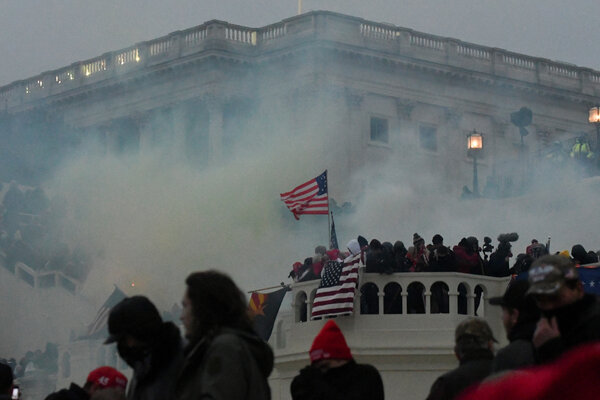 On Wednesday, Representative Tim Ryan of Ohio complained that the agency was a “black box.”

“We’re having a hell of a time getting information from Capitol Police leadership,” said Mr. Ryan, who chairs the House committee that oversees the department’s budget. “We fund the Capitol Police. Congress funds the Capitol Police through the Appropriations Committee. We deserve to know and understand what the hell is going on.”

Operating under the protective wing of Congress, the Capitol Police has more than 2,000 officers to defend two square miles and a half-billion dollar budget — bigger than those that fund the police departments in Atlanta and Detroit.

But it has long suffered from the same troubles that afflict many other police forces: claims of an old boys’ network, glass ceilings, racial bias and retaliation. There have been complaints, too, of lax discipline and of promotions for white commanders who faced misconduct allegations, but harsh treatment for women and Black officers.

A handful of high-profile incidents in recent years — locking down the Capitol but failing to inform Congress; ordering a nearby tactical team not to respond when a gunman opened fire at the Washington Navy Yard; the fatal shooting of a Black woman who made a U-turn at a checkpoint — have raised questions about the department’s procedures and operational paralysis.

Many who are familiar with the department now suggest that these longstanding problems contributed to how easily its officers were overrun last Wednesday.

“Why was I not surprised?” said Sharon Blackmon-Malloy, the lead plaintiff in a racial discrimination lawsuit against the department that has languished for years, while she and a handful of other retired Black officers have staged regular demonstrations on Capitol Hill. “Because I’m going back to the environment in which I worked in all those years.”

While many of the law enforcement agencies that rushed to the scene on Jan. 6 have offered public briefings and comprehensive timelines of what happened, the department that is sworn to protect the building and its occupants has been the quietest.

Capitol Police officials have not responded to numerous requests for comment, nor has anyone in the department addressed the widely circulated videos that appear to show some officers allowing the rioters to enter the building, or treating them in a sympathetic manner, while their colleagues were being assaulted with fire extinguishers, flagpoles and hockey sticks.

The officers who have been suspended include one who took selfies with members of the crowd and another who put on a “Make America Great Again” hat and directed rioters into the Capitol, according to Mr. Ryan.

Law enforcement experts noted the apparent absence of commanders and supervisors as the mob breached the building. A memo from members of the department’s Capitol Division, written after last week’s rampage, praised Inspector Thomas M. Loyd, the division commander, for fighting “shoulder to shoulder” with the rank and file, while implicitly criticizing the rest of the leadership.

Inspector Loyd “did not retreat inside the building to attempt to ‘lead’ from his office,” said the memo, a copy of which was provided by a retired officer. “He did not stay back, away from the line, to avoid any physical conflict, but rather pulled officers off the line and took their place so they could receive medical attention.”

In an interview, Jim Konczos, a former head of the officers’ union, said the department suffered from a longstanding failure to hold the upper brass accountable for alleged misdeeds, calling it a “morale killer.”

In one instance, a commander who had an affair with a married subordinate was demoted one rank and offered a settlement that would have preserved his earlier, higher pay, according to a decision by the Office of Compliance. At the time, he was leading negotiations on the union contract.

In another, an officer assigned to protect high-ranking lawmakers racked up two charges of drunken driving, including one case in which his car struck a Maryland State Police trooper’s unmarked cruiser. The officer continued to climb the ranks, despite an internal investigation for overtime fraud.

“You get to the point where you just get so disgusted with everything — you go to the chief, go to the sergeant-at-arms, and nobody cares,” Mr. Konczos said.

The responsibilities of the Capitol Police are vastly different from those of ordinary police departments. The force protects the Capitol grounds, members of Congress and staff, and it screens millions of visitors a year. Officers are expected to recognize the 535 lawmakers and to avoid offending them.

The delicacy of that task was on full display in 1983, when a House inquiry found that the Capitol Police had botched a drug investigation by creating “the impression that the investigation may have been terminated to protect members” — while noting that, to be sure, no members had been implicated.