It’s Friday. Today we’ll look at how retailers — especially chain stores in Midtown — are rethinking things as they adapt to what they hope will be a post-Covid existence. 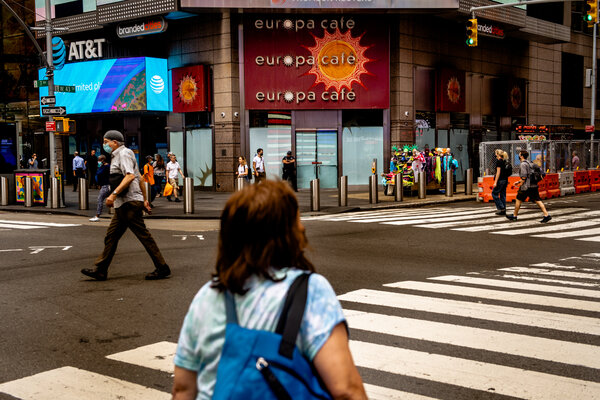 Say that your office is in Midtown and that, after working from home for more than a year, you finally go in. You probably won’t see the old, familiar places along the way — or at lunchtime.

That coffee shop where the barista recognized you and remembered the way you liked your coffee, even if he or she did not remember your name? It might have closed.

My colleague Julie Creswell says that many people who work in the office towers of Midtown have discovered that many of their favorite haunts were casualties of the pandemic — the places where they grabbed a muffin in the morning or a salad later in the day.

She took a look at a couple of blocks on Eighth Avenue. A once-busy Starbucks on the corner of 39th Street is gone. So is a Dos Toros Taqueria that opened three years ago. Also gone is Wok to Walk, which once served steaming containers of noodles mixed with chicken and vegetables.

The changes are not limited to restaurants. Stores have cut their hours. The Walgreens that occupies two floors in the Empire State Building — the largest retail tenant in the building — used to be open 24 hours a day. Now it opens at 8 a.m. and closes at 10 p.m.

The conventional wisdom was that delicatessens and locally owned stores were hit hardest, but many chain stores have also disappeared. Starbucks has closed more than 40 stores. Pret a Manger has reopened only half of the 60 sandwich shops it had in Manhattan before the pandemic.

Why was Midtown hit so hard?

Midtown was at risk because its real-estate inventory consists mainly of offices and hotels — and hotels were devastated because tourists stayed home. By contrast, said Jeffrey Roseman, a retail real estate broker with Newmark, “If you think of other office-centric areas, whether all the way downtown or Flatiron or Hudson Yards, there is a lot of residential surrounding those areas that helped sustain those markets.”

Even the huge Empire State Building faces uncertainty. A Times survey found that tenants representing 41 percent of the space there said that the norm when they return to the office would be a hybrid model. Among those tenants is LinkedIn, the Empire State Building’s biggest tenant, which leases 10 full floors and part of another, paying at least $26 million in rent annually.

At the same time, there are some newcomers, attracted by record-low retail rents. The burger chain Sonic signed a lease for its first restaurant in the city, replacing a Pax Wholesome Foods location in Midtown.

And some chain restaurants have adapted to what they hope is a post-Covid world.

Gone for now from the Bryant Park location of Le Pain Quotidien are the long communal tables that used to be a signature of the chain. A remodeling next year will make room for more refrigerated cases with grab-and-go salads, sandwiches and drinks. And an app is designed to smooth preordering for pickup. But Stephen Smittle, the chain’s senior vice president for operations, said some customers long for the way things were before the pandemic.

“We used QR codes for guests to look at the menu as we tried to limit the contact of surfaces,” he said, “but the majority of our guests want to hold a real menu. They very much want to feel normal. They want a server. They want to hold a cup of coffee, not a paper cup.”

Before a promising, mostly sunny weekend arrives, the chance of showers will continue with temps in the mid-70s during the day. They’ll drop to the high 60s at night. Tonight will be the last time the sun sets at 7 p.m. or later in New York until March 13, notes New York Metro Weather.

New Jersey will pull $182 million in funding from Unilever after Ben & Jerry’s, a subsidiary of the company, decided to stop selling ice cream in Israeli-occupied territories.

A Long Island woman went missing after a cross-country trip with her fiancé. He’s now a person of interest.

Some of those who accused R. Kelly of abuse shared the same curious detail: They were pressed to write letters absolving him.

The row of dirt bikes and all-terrain vehicles was lined up as if Evel Knievel was about to jump over them. But what unfolded was not a death-defying stunt but a slow-motion, close-to-the-ground maneuver at a landfill — “a very visual way to get our point across,” Mayor Bill de Blasio called it.

The point was to crush dirt bikes and all-terrain vehicles with bulldozers. The bulldozers revved their engines and began reducing them to — not smithereens, not right then, but definitely unrideable rubble.

“I think we put an exclamation point on it,” de Blasio said when the bulldozers had rolled back and forth. “People hate these things. They’re loud. They’re obnoxious.”

Dirt bikes and all-terrain vehicles have proliferated on city streets, even though they are illegal on public thoroughfares — lacking brake lights, turn signals and mirrors, they cannot be registered as motor vehicles. To people from Washington Heights to Hell’s Kitchen robbed of sleep when roaring engines zip by in the middle of the night, dirt bikes and all-terrain vehicles have created a quality-of-life crisis. Eric Adams, a former police captain who is the Democratic candidate to replace de Blasio, has denounced ATVs and dirt bikes as signs of lawlessness.

De Blasio said that the Police Department already seizes and destroys hundreds of dirt bikes every year, but wants to find more. Deputy Chief Charles McEvoy urged New Yorkers to tell the police where dirt bikes and all-terrain vehicles are parked or garaged, so the police can confiscate them. He said that people could call their local police precincts or pass the information along confidentially by calling the CrimeStoppers line (800-577-TIPS, or 800-577-8477).

Concerns about safety rose in July after a 4-year-old boy was critically injured when an illegal dirt bike slammed into him in a parking lot at Flushing Meadows Corona Park in Queens. Last month nearly two dozen City Council members called for stricter enforcement of rules against off-road vehicles, along with higher penalties for offenders.

The event on Thursday, at Fresh Kills on Staten Island, was not the first that de Blasio has attended. One in 2016 was not universally applauded. But on Thursday, de Blasio seemed delighted by the pile that the bulldozers had rolled over.

“It’s actually quite a beautiful sight in its own way,” de Blasio said.

A set of keys to an old reservoir in Midtown is among over 250 items in an exhibit at the New York Public Library, Gothamist reports.

More on Broadway’s reopening: Black playwrights, both delighted and worried about the upcoming season, discussed the road ahead. Watch how five shows retuned, restored and restarted signature effects.

What we’re watching: Matthew Haag, a Times Metro reporter, will discuss the state of New York City’s road to economic recovery on “The New York Times Close Up With Sam Roberts.” The show airs on Friday at 8 p.m., Saturday at 1:30 p.m. and Sunday at 12:30 p.m. [CUNY TV]

After a pickup at school in Manhattan, I rode a rush-hour F to Queens with my daughters.

The train was packed. The baby started screaming. There was a collective groan among the other passengers.

When toys failed to pacify her, I jingled my keys. That made her squeal with laughter, but she would wail when I stopped for even a second.

By the time we got to Jackson Heights, the train had started to empty out. It was silent except for the keys’ rhythmic jangle.

A new passenger got on.

“What’s with the keys?” he shouted, not holding back on the expletives.

I stopped mid-jingle, but then other people jumped to my defense.

One man who had been riding the train the whole way put his hand to his heart.

“You are a beautiful mother,” he said.

I gave the keys one last shake. The baby was fast asleep.

Glad we could get together here. See you Monday. — J.B.

P.S. Here’s today’s Mini Crossword and Spelling Bee. You can find all our puzzles here.