MEXICO CITY — Children call him begging for oxygen for their parents. Grandparents call gasping for air in the middle of the night. People with no cash offer him their cars instead.

Juan Carlos Hernández tells them all the same thing: He has no oxygen tanks left.

After surviving his own bout with the coronavirus and then losing his job, Mr. Hernández began selling oxygen tanks out of his car. Then a second wave of the coronavirus slammed into Mexico this winter and demand for oxygen exploded, spawning a national shortage of devices that deliver the lifesaving resource.

Prices spiked. A black market metastasized. Organized criminal groups began hijacking trucks filled with oxygen tanks, or stealing them at gunpoint from hospitals, according to media reports. And for a growing number of Mexicans, the odds of survival were suddenly in the hands of amateur oxygen sellers like Mr. Hernández.

“We are in the death market,” Mr. Hernández said. “If you don’t have money, you could lose your family member.”

The resurgence of the pandemic in Mexico left more people infected than ever — among them the country’s president, Andrés Manuel López Obrador. With packed hospitals and a distrust of the health care system pushing many to face the disease at home, the number of casualties shot up. In January, Mexico recorded more than 30,000 deaths, the highest monthly toll to date.

Part of the reason so many more people are dying now, doctors and government officials say, is the shortage: There are simply not enough oxygen tanks. 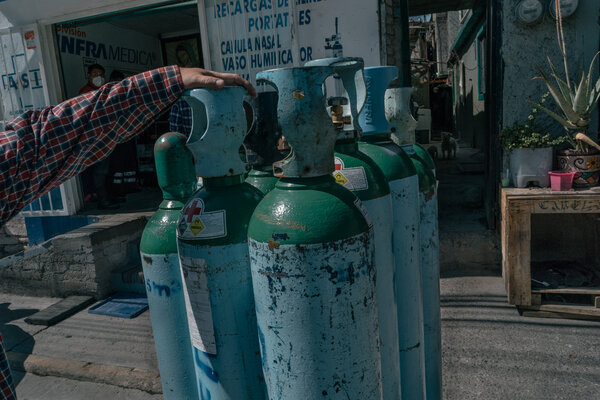 “Oxygen right now is like water,” said Alejandro Castillo, a doctor who works at a public hospital in Mexico City. “It’s vital.”

New outbreaks across the globe have stretched the supply of oxygen in hospitals from Los Angeles to Lagos, but in Mexico, the scarcity is being felt inside people’s homes.

Eight in 10 hospital beds are full in Mexico City, the epicenter of the outbreak, and emergency rooms have been turning people away. Many patients refuse to seek medical care at all, driven by a fear of hospitals that runs deep in Mexico.

To survive at home, the sickest patients need to get purified oxygen pumped into their lungs 24 hours a day, sending friends and family members scrambling, often in vain, to find tanks and refill them multiple times a day.

David Menéndez Martínez had no idea how oxygen therapy worked until his mother became ill with Covid-19 in December. Now he knows that the smallest tank in Mexico can cost more than $800, up to 10 times more than in countries like the United States. The oxygen to fill it up costs about $10 — and can last as little as six hours.

Mr. Menéndez had a few tanks on loan from friends, but still spent hours waiting to refill them in lines that stretch across city blocks and have become a fixture in certain Mexico City neighborhoods.

“You see people arrive with their tanks and they want to get in front of the line and they end up crying, they’re desperate,” he said, recalling the pleas he heard: “My father is at 60 percent oxygen saturation. My brother is at 50 percent saturation. My wife can no longer breathe. She’s turning blue, her lips are blue, help me.”

Mr. Menéndez only thought of his mother. “I imagined my mom suffocating,” he said.

The outbreak in Mexico City began to flare in December, after the authorities delayed shutting down nonessential businesses for weeks, in spite of figures that, according to the government’s own rules, should have triggered an immediate lockdown. Officials eventually tightened restrictions in the capital, but then came the holidays, and many Mexicans defied government pleas to stay home.

“The surge came out of absolutely nowhere,” said Mr. Sheffield, who noted that the price gouging worked only because people were so desperate. “If these people do not receive oxygen in time, they die.”

After his grandmother fell ill after Christmas, Miguel Ángel Maldonado Hernández borrowed about $800 from friends to pay an unlicensed seller $1,600 for an oxygen concentrator — a machine that takes in air and pumps out purified oxygen. It didn’t work. Then he paid a $100 deposit to a seller on Facebook for a concentrator that never arrived.

Mr. Maldonado, who lives in a poor neighborhood just outside the city limits, is still in debt to his friends after the shady deals.

“You’re in a stressful situation, in anguish for your family,” said Mr. Maldonado. “You run out of options and well, you fall for it.” His grandmother died in her bed.

But Mexico doesn’t produce oxygen tanks and can’t import them from the United States right now. “It’s impossible,” Mr. Sheffield said. “The demand is very high in the States.” Orders from China will take months to arrive.