Weather: Mostly sunny, with a high around 80. Partly sunny and mid-70s on Saturday, with a chance of a sprinkle. It’ll clear up, and warm up, a bit on Sunday. 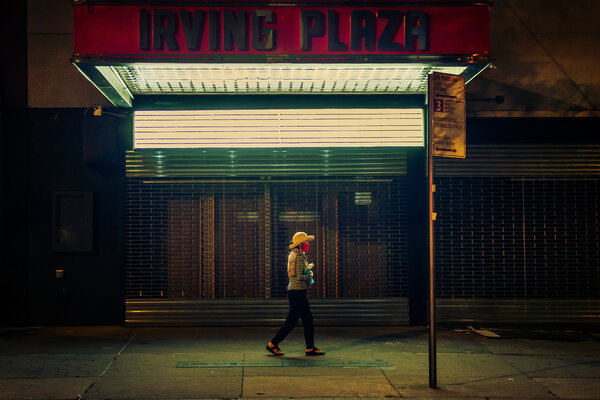 Museums have reopened. Students are returning to classes. And soon, restaurants will resume indoor dining. But the city’s performing arts scene remains largely in the dark.

It’s unfortunate for the avid showgoer but devastating for the actors, designers and stage crews whose livelihoods depend on the stage.

My colleagues Michael Paulson, Elizabeth A. Harris and Graham Bowley imagined what this coming weekend could have looked like and what it would have meant for all the people involved in the arts scene.

“The arts aren’t just a nice extra in New York City,” Ms. Harris told me. “They are a big part of why people live here and what draws tourists to visit. They’re a significant piece of the city’s economy, and for many thousands of New Yorkers, a job in the arts is how they pay rent.”

Here’s what they found.

Performers, stage crews and programmers: Where are they now?

Before the pandemic, there were 280,000 jobs in the city’s fine and performing arts industry. But between April and July, more than half of those jobs disappeared, according to a Brookings report.

At first, many organizations were able to help support employees through various grants. But as months pass, aid is running out.

Many of the side jobs that artists had as art handlers, fitness instructors and waiters have suffered too. “It’s crisis level for creative occupations within the city because it’s all so intertwined,” Michael Seman, an assistant professor of arts management at Colorado State University, told my colleagues.

Cultural organizations of all sizes are feeling the shutdown’s brunt.

The American Ballet Theater estimates it will lose $20 million in revenue after canceling six tours and two full seasons. Martha Graham Dance Company has seen its annual budget shrink by nearly half so far. And The Secret Theater, a small venue in Queens, closed for good in May.

Even the largest, name-brand institutions are facing steep losses. The Metropolitan Opera says it could lose $155 million in revenue after canceling shows until September 2021.

The city’s economy is taking a hit too.

Mr. Paulson, Ms. Harris and Mr. Bowley found that taxable revenue from performing arts companies fell 85 percent this spring compared to last year. It’s among the steepest drops of any New York industry, according to the Center for an Urban Future.

It’s not just about the ticket sales and taxes. The city’s performing arts scene was a big draw for tourists who would have also contributed to the hotel, taxi and retail industry.

“Without the arts, New York City is not as attractive a place to live,” Darren Walker, the president of the Ford Foundation, told my colleagues. “And without the arts, there’s very little reason to visit.”

But the show will go on, somehow, someday.

A few Broadway shows, like “The Minutes,” “American Buffalo,” and “MJ: the Musical,” have already announced spring dates. “The Music Man,” starring Hugh Jackman, hopes to commence in May. And Lincoln Center might open a 400-seat socially distant outdoor venue for dance and musical performances next year (if large gatherings are allowed by then).

Mr. Paulson told me: “I spent a lot of time talking to people who expected to be working on a show this weekend — actors and designers and ticket-sellers and so on — and I was struck by two things: how hungry they are to return to the stage, and how uncertain they are about when that will be.”

‘All Eyes Are on New York’: Can It Pull Off Hybrid Learning in Schools?

Trump Says D.A. Is Using ‘Speculation and Innuendo’ to Get His Tax Returns

Protections for New York’s restaurant and bar owners have been extended through March 2021. [Eater NY]

The number of women running for state Legislature has hit an all-time high. [Politico]

What we’re watching: President Trump is threatening to cut federal funding to New York and other cities he has called “anarchist jurisdictions.” Mara Gay, a member of The Times’s Editorial Board, and the writers Eleanor Randolph and Clyde Haberman will discuss that issue and others on “The New York Times Close Up with Sam Roberts.” The show airs on Friday at 8 p.m., Saturday at 1:30 p.m. and Sunday at 12:30 p.m. [CUNY TV]

And finally: Your virtual social weekend

Although many performance spaces and community centers are closed, people are finding creative ways to connect through virtual events and programs. Here are suggestions for maintaining a New York social life this weekend while keeping a safe distance from other people.

‘Art Deco New York and the Race to the Clouds’ webinar

Learn about the city’s art deco skyscrapers with a virtual walk-through around Midtown on Friday at 1 p.m. Explore 1920s New York, learn about the evolution of art and architecture in the city and take 3-D glimpse into some of Manhattan’s well-known lobbies.

On Saturday at 10 a.m., celebrate some of nature’s creatures with this virtual festival for monarch butterflies and pollinators (like moths, bees and birds). Watch presentations and learn how to make an urban pollinator garden.

R.S.V.P. to this free event through the event page.

Summer on the Hudson: ‘Breathing with Strangers’

Watch a livestreamed performance by the Kinesis Project Dance Theatre at Riverside Park South on Saturday at 5:30 p.m. The show is a “love song to New York City,” and viewers will hear stories of people’s interactions in the city. They can also share their own on writekind.org.

It was 1967, and Mozart’s “The Magic Flute” was being performed by the Metropolitan Opera. I wanted to see it, but I didn’t have a ticket.

Outside the hall, I found a person selling a single ticket. I negotiated the price down and went inside.

The woman sitting next to me was friendly, and we started to make small talk. I told her proudly of my successful negotiation.

We’re experimenting with the format of New York Today. What would you like to see more (or less) of? Post a comment or email us: [email protected]

The Government is planning to change coronavirus restrictions to allow couples who do not live together to have sex. Currently couples who live apart under…