Weather: It should get sunnier as the day goes on. High in the low to mid-70s. 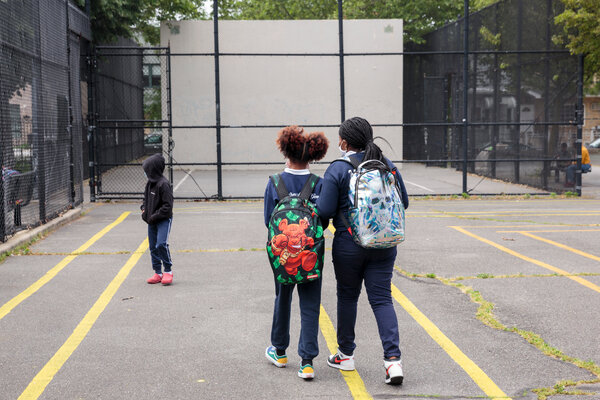 This September, New York City’s public school students will no longer sit in front of a computer screen for class. Parents won’t have to juggle working from home and helping their children through technical difficulties. Teachers won’t have to remind students to mute themselves on Zoom.

Schools will fully reopen this fall, and remote learning will be eliminated, Mayor Bill de Blasio announced yesterday. The complete return to in-person classes is a major indicator of the city’s economic recovery.

“It’s time to do things the way they were meant to be done,” Mr. de Blasio said during a news conference. “All the kids in the classroom together.”

[New York is one of the first big cities to remove remote learning this fall.]

Schools will fully reopen, without a remote-learning option but with safety precautions. Masks will still be required, and schools will follow social-distancing guidelines from the Centers for Disease Control and Prevention.

The city is not yet requiring staff members and students to be vaccinated before returning.

Parents will be able to tour schools during open-house events in June.

Mr. de Blasio said the school reopening was possible thanks the city’s low positivity numbers and availability of vaccinations.

On Monday, he said the city’s positivity rate was 1.13 percent, the lowest it had been since last September. Over 7.9 million vaccine doses have been administered in the city, he said, and 50 percent of adults have been fully vaccinated.

Several coronavirus restrictions were lifted throughout the state earlier this month.

“Covid is being run out of New York City,” the mayor said.

Parents on Monday had mixed reactions.

For Jenn Adams, who is a tutor and has a 5-year-old who attends Public School 319, the announcement was welcome news to both her and her son. She has balanced tutoring students over video calls, scheduling in-person visits and making sure her son was learning in his online classes. It has been exhausting.

“I’ll have more time to work,” she told Nate Schweber as he reported for The Times. “He will learn better. It’s exciting.”

Juan Gomez and his wife, Elvia Gonell, who are parents of two children, said they felt conflicted about the end of online learning. Ms. Gonell said she worries about virus variants spreading in schools, especially since her 9-year-old child has not been vaccinated.

How to Vote in the New York City Primary in June

Who’s Winning the N.Y.C. Mayor’s Race? Even Pollsters Are Confused.

The police were searching for someone who they said had spray-painted over 60 cars in a Queens neighborhood. [NBC New York]

Local leaders are calling for stronger safety measures after a 24-year-old woman fell to her death during a rooftop party in Manhattan. [ABC 7]

A man pulled a knife on a security guard at the Times Square M&M store after shoplifting, law enforcement said. [New York Post]