Like a rite of fall, the Katmai National Park and Preserve in southern Alaska celebrates its fattest brown bears.

The park holds Fat Bear Week, an online competition that highlights how intensely the bears eat, stuffing themselves with sockeye salmon at the Brooks River to gain weight for winter hibernation.

The event began as Fat Bear Tuesday in 2014, and expanded into a weeklong contest a year later to raise awareness about the wildlife in the park and preserve, the home to about 2,200 brown bears.

“People love bears and they love a good competition,” said Amber Kraft, a spokeswoman for the park, which stretches about 4.1 million acres southwest of Anchorage. “This year, in particular, Fat Bear Week is a nice break from everything else going on,” she added.

Park rangers have created a March Madness-like game out of the contest by pitting pairs of bears against each other — for votes — and asking the public to choose their favorite heavyweights. This year, to allow more people to take part, voting moved off Facebook and onto a website hosted by explore.org, a network that includes more than 150 live nature webcams. 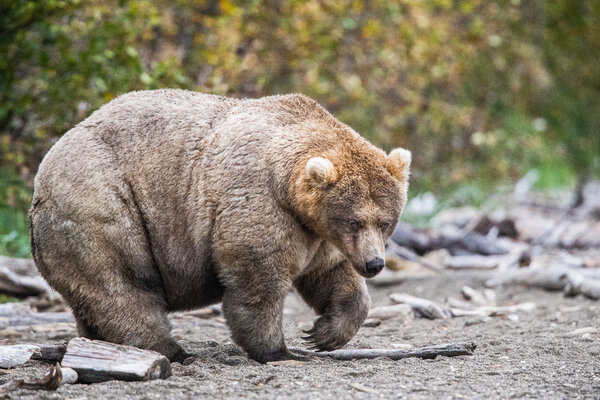 The bear with the most votes advances to the next round. (The losers can, well, go back to eating.) The finals take place Oct. 6, when one bear will be crowned the big champ. What does the bear win? A moment of social media fame, also the likelihood of surviving winter.

To show the bears’ drastic weight gains, the park shows photos of the them before and after they began packing on the pounds this summer.

Bears and their admirers

Park staff members assign the bears numbered names, like 480 Otis, so that they can identify and monitor them, and some of the most frequently seen bears get nicknames, too. Each year, the officials detail biographies for the bears, listing their age, gender and offspring, and they set up a live webcam that shows the bears fishing (and entertains people online).

On social media, the bears have fans who root for them as they go about their bear lives. Using the hashtag #fatbearweek, some superfans have even dressed up as their preferred bear. One such fan, Kimberly Daggerhart of Asheville, N.C., wore a bear costume for Halloween last year to celebrate 435 Holly, the season’s winner.

“She is large and in charge and she seems to be a great mom to her cubs,” said Ms. Daggerhart, 35. “I think this contest is so popular because it’s one of the few remaining wholesome events we can all participate in. It’s fun to cheer for these bears!”

This year, 435 Holly will defend her title.

“She is fat. She is fabulous,” the park announced after she won last year. “Long live the Queen of Corpulence!”

Holly, described as a “medium-large adult” on her bio, has won over some fans with her strong maternal instincts. She has reared several litters of cubs, making her “one of the more experienced and tolerant mother bears at Brooks River,” it said. In 2014, she adopted a lone cub into her family and raised the cub alongside her own.

In 2018, a bear named 409 Beadnose won the fattest title. “Her radiant rolls were deemed by the voting public to be this year’s most fabulous flab,” the park declared that year. She also won in 2015.

Another fan favorite and repeat winner is 480 Otis, a male bear who was estimated to weigh more than 900 pounds in 2019. He has additional bragging rights for being the inaugural Fat Bear Tuesday champ in 2014, and the winner in 2016 and 2017.

The meat of the competition.

Once the bears curl up in their dens to begin hibernation, they will not eat or drink for months, losing about a third of their body weight. Their survival rests on having a large amount of stored fat, meaning the brown bears have to eat a year’s worth of food in six months in a process known as hyperphagia.

One of the more easily accessible foods the bears find at the park is sockeye salmon, which go through the Brooks River in large numbers every year. From late June to mid-October, as the fish swim upstream to spawn, dozens of bears gather to feast at the river, a 1.5-mile long waterway that winds between two lakes.

“Some bears can eat more than 40 salmon in a day,” Ms. Kraft said, noting that a salmon is between 2,500 and 6,000 calories. The bears also subsist on berries and grass.

Brown bears can put on up to four pounds of weight a day and, as hibernation begins, the largest adult males can weigh more than 1,200 pounds.