MOUNT VERNON, N.Y. — My family moved to Mount Vernon, N.Y., when I was 6. Our new home was several blocks from one of the city’s most recognizable buildings, Grace Baptist Church. Its gargantuan edifice, made of white brick and looming stained glass windows, was where I was baptized only a few months before our move, and it is the only church home I have ever known.

While the cathedral choir sang during Sunday services, I usually busied myself with reading the church programs. For 132 years, Grace Baptist congregants had been telling their founding story the same way: “In 1888, five Negro Baptist women, with great faith and courage, founded Grace Baptist Mission in Mount Vernon, New York.” I read that line every Sunday, waiting week after week for someone to update it with the women’s names.

And so last year, as I was beginning graduate school and in search of a subject for my thesis, I took it upon myself to discover their identities.

Grace Baptist is a powerful and influential church. Its congregation has supported the political careers of many of its pastors and has welcomed the Rev. Dr. Martin Luther King Jr., the Rev. Al Sharpton and the Rev. Jesse Jackson to its pulpit. It hosted Hillary Clinton on her campaign trail in 2016. Ruby Dee, Earl Graves Sr., Heavy D, Ossie Davis and a long list of other African-American cultural icons have walked on the red carpeting of its sanctuary. 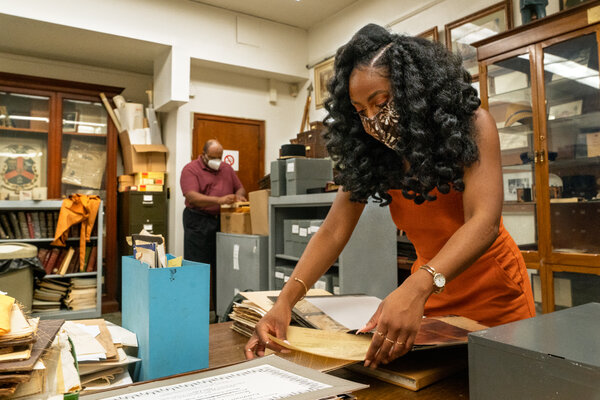 Grace Baptist and its current pastor, the Rev. Dr. W. Franklyn Richardson, lead by example in the predominantly Black city, building affordable housing, feeding the poor and working as advocates for Black lives.

And yet for more than a century, the church’s founders have been known only as “formerly enslaved Negro women.” I was deeply committed to changing that.

I spent 122 days looking for them, ready to uproot a lesson about Black womanhood that I had internalized — that Black women are often relegated to the subtext of history. The road to understanding and conquering my fears of erasure directly paralleled my journey to find these women’s names. I wanted to name them to prove to myself and future generations that these consequential Black women would not be forgotten.

Black women would guide me through months of research. Church mothers were among my first calls for information. A deacon, Mary Dolberry, helped me operate the microfilm machines in the periodical section of the Mount Vernon Public Library and introduced me to the history room.

A genealogist at the church, Debbie Daniels, helped me understand how these women’s names could disappear from their own story. Ms. Daniels taught me American history through census data and demographics, where Black history is at its most treacherous.

She told me stories of the erasure in her own family ancestry. For generations, her family would tell their children that they were descended from Sally Hemings, a woman who had been enslaved on former President Thomas Jefferson’s Monticello plantation. After a genealogical search into her family, she discovered they were really descendants of Heming’s older sister, Mary, the first of the Hemings children to be free.

Black women have always had to traverse the tough terrain of racism and sexism. Few saw the value of recording the activities of Black people or women. And back in the 1880s, illiteracy could have also made it hard for the five women and their community to write down their stories.

I also had to leave room for the possibility of oral tradition. Maybe these women didn’t exist at all.

Fortunately, I was in the period of American history in which Black people were not just listed as numbers and property. There was a chance for me to find evidence of their lives in Mount Vernon through the 1880 census.

It was in the beginning stages of my archival research that I discovered the first mention of these women. In the 1903 clerk book from First Baptist Church in Mount Vernon were the names of white congregation members who undertook the Grace Baptist Mission. “Five colored women” were responsible for asking for their help, and they were allowed to hold their Sunday school in the annex of the Women’s Christian Temperance Union’s meeting space, Willard Hall. The president of this temperance union was a member of First Baptist Church’s congregation.

First Baptist Church and Grace Baptist Church had a tumultuous relationship. The white congregants locked the doors of the chapel when the Mission was behind on the rent that First Baptist illegally charged. There were physical conflicts between their pastors and deacons and a few notices in the local newspapers that warned against directly donating to the members of Grace Baptist Mission during its early days.

Halfway through my search, I had working sociological and demographic portraits of who I was looking for: I knew the five women were established in the community, were married and probably in their 30s, give or take a few years. They also were likely to have been active in social organizations to have captured the attention of white community activists.

In an article from 1894, a journalist from the local newspaper, The Daily Argus, reported that the “colored mission” laid the cornerstone of its new chapel’s foundation. The early members of Grace Baptist placed copies of their city papers and church documents in the hollow center of this cornerstone. I was sure the names of the five women were among these artifacts.

Since 1941, the chapel has been remodeled and occupied by two more churches, Unity Baptist Tabernacle and White Rock Baptist Church. It was disassembled and moved to a new location in the city in 1968 when the Mount Vernon Housing Authority wanted the land for an affordable housing project. White Rock still occupies the chapel sanctuary, only a 10-minute walk from Grace Baptist.

White Rock’s pastor and I briefly spoke about opening the cornerstone before the coronavirus crisis that began last spring forced us all into quarantine. But with the uncertainty of a new pandemic, we were wary of being at the church and bringing people in to help gain access to it.

In the end — after parsing through century-old newspaper articles, census reports, journals of handwritten meeting notes, maps and city directories — I finally had their names: Emily Waller, Matilda Brooks, Helen Claiborne, Sahar Bennett and Elizabeth Benson. They were between 25 and 40 years old when they founded the church. Ms. Waller and Ms. Benson were neighbors, and the only Black families on their block.

I haven’t found their descendants, but I’m certain they are out there. Locating them — and talking to them about their heritage — is my next goal. And while their names have not yet been added to the church bulletin because we haven’t returned to in-person services since the pandemic began, soon, their names will be printed for all congregants to see.

In a year that has brought us a pandemic and national conversations about race and racism, I am proud to have identified the five pivotal women, to shed some light on a legacy that won’t be lost to history.

[Read about the search for the five women in Ms. Pilgrim’s thesis and website.]